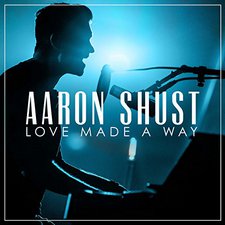 
Aaron Shust has had a bright, ten-plus year (not counting his life in music before releasing albums nationally, of course) career in Christian Music, with songs that regularly play on the radio and that are sung in the pews on Sunday mornings. And it's no surprise that a live album has arrived at this point in his musical journey. With crisp energy and a good batch of songs, Love Made A Way succeeds in showing Shust (and guests) at their best, in a setting that worship was meant to be experienced in: live.

Shust is a nuanced and conservative (in the best sense of the word) songwriter, not given to being too flashy (no guest verses for a rapper here), but more concerned with heart and ministry than fads in production. As such, this live document of his songs is a good entry point into showing what makes Shust so broadly appealing. His songs fit into the overall milieu of worship music (with traces of Chris Tomlin and Phil Wickham, with a dash of Springsteen and John Mayer thrown in for good measure), yet a second look at them in the context of this album show that Shust is a great songwriter, whose honest and heartfelt songs make for a powerful hour of worship.

Opening number "Heartbeat" does an admirable job of kicking things off, though the guest appearance by former Sanctus Real frontman Matt Hammit barely registers, raising the unwritten rule of albums that if you're going to credit a guest appearance, then that guest needs to have a distinct role within that song. Thankfully, the following song's guest appearance by April Greenbright, whose alto voice counterpoints Shust's on the fine "My Hope Is In You," adds a needed dimension to the popular song. This tune's rousing melody sounds more fierce in its live inclination than the studio version (a decided plus of the live setting). The following, "Belong," has a great bridge section, with its syncopated beat and shouted lyrics ("take this flesh and bone / breath your life within / take this heart of stone / make it beat again"), that is a winner, and one of several here that are brand new (others include "Heartbeat" and "Ever Be"). That these songs stand tall along side Shust's decade of hits ("My Savior My God," "God Of Brilliant Lights," "My Hope Is In You") shows Shust's continued songwriting skills. Northpoint Music cover "Death Was Arrested" makes good use of its Celtic-tinged chorus and guest vocals from veteran artist Christy Nockles. The cover of Elevation Worship's "Resurrecting" is a powerful moment of worship that features several movements within the song that distinguishes this tune from the sometimes too-simple modern worship song formula.

Shust's biggest hit, the Dove Award-winning Song of the Year in 2007 "My Savior My God," ends the set nicely, and this song's tuneful quality makes it an excellent corporate worship number. Unfortunately, the re-made closing hymn, "Lead On O King Eternal," mars an otherwise great set list. The old hymn's lyrics don't match the blasé', new melody that Shust has written for it, and even tagging another hymn at the end, "Take My Life And Let It Be," doesn't improve the song. But this is the only real misstep in the otherwise fine set list.

In hearing all of Shust's notable songs together, the average listener might say "wait, he's the one who wrote this song?", and that's no knock on Shust at all. He's a humble, hard-working songwriter who has built a solid body of work that is nicely represented on this live album.