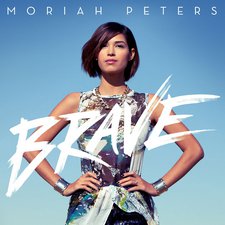 Moriah Peters is an exceptional vocalist. That sounds like an obvious statement, but not all singers are equally talented, and the quality of their songs show it. As I Choose Jesus demonstrated two years ago, her talent seemed strong from the get-go, but it was merely a good start. Peters, then, has arrived at the test of true skill: nailing the sophomore album. And Brave checks the box.

I Choose Jesus definitely had the makings of a debut made by a nineteen-year-old. It was truthful and fun, but nonthreatening and cutesy. Brave, on the other hand, demonstrates the prowess of an experienced performer who's confident with stepping things up. The title is a fitting modifier for the album's methods, as it takes some measurable chances without forsaking Peters' straightforward lyrical approach. Co-produced by Joel Smallbone (Peters' husband and one half of the duo For King and Country) and Seth Mosley, Brave is multidimensional through all ten tracks while also finding a pop home base. Overall, the album is polished and more produced than I Choose Jesus; that could sound negative, but it demonstrates that Peters is still exploring where her sound can go, and that's only a great thing.

The opening title track sets the bar high with a thumping chorus and soaring vocals to match. Soon afterwards, the accomplished "(O Fear) My God is Near" and "To Leave It All Behind" remind the listener of what kind of artist Peters is: solidly straightforward lyrically without forsaking artistic decision making. "Born to Be Free" and "Waterfall" showcase the increased production most clearly, though perhaps "You Carry Me" and "Don't Want to Live For Me" creep a little too close to the radio fodder line from time to time. Still, the songwriting is original and avoids cookie cutter tendencies.

Two particularly strong moments on Brave originate in duets with Joel Smallbone. "I'll Wait For You" and the tail-end of "To Leave It All Behind" feature two great voices that complement each other remarkably well, and the latter ends with being a realistic take on relationships that grow slowly ("Love's far away, far away, but we're moving closer/it's kinda crazy, it's strange, suddenly it finds you"). It's not a typical love ballad for a duet, but it's able to be both uncharacteristic and fresh. The album finishes with a moderately compelling piano-based arrangement of "Give Me Jesus," closing Brave gracefully. Additionally, a second version of the title track (featuring a rap in the bridge by Andy Mineo) appears as a bonus track, and though it doesn't really fit the album's whole, it's a nice addition.

Upon a casual listen, Brave might not stand out dramatically as a landmark album, but closer inspection reveals something deeper: it represents important growth for Moriah Peters' progression as an artist. It's a mature release - not plain and boilerplate, nor gritty and shocking, thankfully hitting squarely between extremes. Album number three still has a wide window of opportunity to make some memorable statements, but Peters makes a convincing claim to Christian pop with Brave. At the end of this run, it's hard to get around the fact that it's a cut above most pop albums of its kind, and it's an impressive second effort from an up-and-coming star.