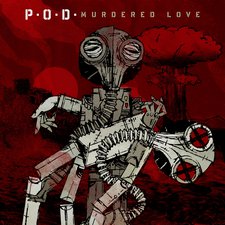 
It's been ten and a half years since P.O.D. have, arguably, released their last great album. Since that time, they've experienced the departure of guitarist Marcos Curiel from the band, experimented with Living Sacrifice's Jason Truby, and then welcomed Marcos back into the fold. All the while, they were never quite able to capture the perfect blend of an album like Satellite. Can the San Diego quartet turn things around coming off what was possibly their weakest effort to date (When Angels & Serpents Dance) and their longest span between records? The answer is a mix of sheer excitement and utter disappointment. On Murdered Love, the band welcomes back more of their Southtown and Satellite sound for much of the album. Murdered Love is possibly their boldest album spiritually and features what may be some of the best songs of their career.

The album kicks off with the previously released song "Eyez" to get things going on a good note. In usual P.O.D. fashion, they reach out for guest appearances in places you might not expect. For "Eyez," they tapped Hatebreed's screamer Jamey Jasta to assist with vocals; the choice was an excellent one, to say the least. Jasta's appearance quickly became one of P.O.D.'s best collaborations in this reviewer's opinion. From there, the album takes a step up with the title track. The chorus starts by proclaiming, "The day that they murdered love!", making mention to the death of Christ, but near the end, Sonny switches things up and takes a more personal approach crying out, "The day that I murdered love!". "Murdered Love" is a kick in the teeth and proof that P.O.D. is back on the right track musically. "Higher" is next up on the record and is reminiscent of "Alive." The song has the sound and feel of the smash hit from Satellite and carries an extremely positive message of faith and hope.

"Lost in Forever" isn't the first track released from the album, but it is the lead single. It's not a bad song, but it's a little puzzling as the lead radio single; "Higher" really feels like it has more potential. It has a good vibe, but has a little more Truby-era feel to it ("Sleeping Awake" somewhat comes to mind). From there is the first misstep in "West Coast Rock Steady." The song features Sen Dog from Cypress Hill, though his appearance is pretty pointless. Sen Dog has a laugh or two here and there, but his main contribution is simply saying the last few words of each line with Sonny. The track takes on a "fun" vibe similar to something like "Rock the Party (Off the Hook)," but it just doesn't translate nearly as well. To add to the problem, the lyrics suffer. Though it's just a song about California living, the song lyrics are a little weak and at times very cheesy. Lines like, "and all these California girls, how could you not be straight?," make one think, "Really, Sonny?"

"Beautiful" is next up and has the potential to be wrongly overlooked. The music is soft and fairly plain, but there is something about Marcos' guitar part that really stands out among the simplicity. The song is full of hope and deals with issues that so many kids suffer with today. Verse one deals with suicidal thoughts and drug use while verse two talks about abuse and cutting. In the third verse, Sonny admits to having his own struggles just like his listeners, but gives hope that they can make it. The chorus is so simple yet rings so true and Sonny sings, "Life is beautiful; share a little love with the whole wide world" Despite the "simplicity," the song is a much-needed anthem of hope for today's youth and has the power to touch lives. From there, the album gets heavy, and deep, again. The prophetic "Babylon the Murderer" feels like it's taken from Revelations 17 and 18. So many relate "Babylon" to P.O.D.'s reggae roots or "supposed" Rasta beliefs, but in this case, it's biblical, as John's vision of Babylon's fall is played out.

While "Babylon the Murderer" is one of the album's best, it's followed by one of P.O.D.'s all-time best in "On Fire." The song was also previously released as a demo and the San Diego boys really bring it on this track. It's hard to put into words the energy brought to the album by this song. From the "wah pedal" intro, to the Rage Against the Machine vibe of the song, to the chorus that absolutely kicks, "On Fire" proclaims P.O.D.'s return more than any other. The worst part of "On Fire" is that is followed by the old school hip-hop tune "Bad Boy." The record goes from its absolute height to a very low low. In the song, Sonny is basically saying that he's a bad boy looking for a good girl. In theory, it would be decent enough, but the cheesiness found in "West Coast Rock Steady" returns. Lines like, "Girl, you know how I do, girl, I know you heard of me and my crew. And, girl, I'm looking for a love that's true not just another ho to do," should absolutely make you cringe. The attempt at being playful and fun falls flat with this one. "Panic and Run" is next up and brings a punk rock vibe that's undeniably fun. The song has a Bad Brains feel and may remind you of a song like "Without Jah, Nothin'."

Finally, on to the controversy... P.O.D. are no strangers to it and they now find themselves in their biggest one yet. "I Am" (Which has been removed from the Christian market release) is a dark and hard-hitting song. The lyrics are from the view of a lost person searching for something more. The verses of the song do nothing but name sinful people (or types of people), or hopeless people. For example, the opening lyrics are, "I am the murderer, the pervert sick to the core. I am the unclean dope fiend, I am the whore. I am the beat down mistreated, sexually abused. I am violated, fornicated, and sexually used." The chorus begins to show a little hope as it seems the lost person is looking towards God, but that's when the bomb drops. Though P.O.D. claims to be a mission-based band focused on reaching the lost, their main fan base is undeniably in the Christian market. Many were shocked, and will be shocked, to hear that the boys decided to go with a word that is held as the ultimate "dirty word" in our society. Sonny sings, "Are You the one that's comes to set me free? 'Cause if You knew who I am would You really want to die for me? They say You are that cursed man, the one who hangs from this tree. Well I know You are the one and Son of God, so tell me who the f*** is he?" It's been a point of contention for quite some time now (since an unedited form of the song made the rounds to media). Thankfully, the guys decided to edit the word after some prayer and deliberation, but the fact remains that it is plainly there and recognizable, smeared out or not. In my opinion on the matter, I find it unacceptable. The usage of such a word directly after the name of Christ is completely disheartening and dirties the most beautiful name on earth. I understand reaching out to a person that doesn't know Christ, but that doesn't mean we have to act or talk like them to accomplish the mission, role-playing or not.

Murdered Love would have easily garnered a 4-star rating without the disappointment of "I Am," but that one song sadly skews the entire album. We live in a digital age where the track can be skipped from your favorite online retailer, but it's hard to recommend this album to a younger music fan. The world is certainly a harsh environment, as Sonny alluded to in an online interview, but is it necessary to purposely place that environment in the middle of our Christian homes? I am not holding or placing any judgment on P.O.D. for this one, but it most definitely affects my overall opinion of the album. The music, at least for the most part, signals the return of the P.O.D. that saw huge success in the late 90's and early 00's. Tracks like "Eyez," "Higher," "Beautiful" and "On Fire" are outstanding. Many bands that lose notoriety tend to fall off into the oblivion, but not P.O.D. They have found a way to get back their sound and managed to do it in a way that brings their faith and beliefs to the forefront. This album is likely to fall squarely in between Southtown and Satellite for many fans. P.O.D. helped pave the way for Christian artists into the mainstream many years ago; while there are some mishaps on the album, P.O.D. give a pretty good reminder that Christians can still rock.

After coming off of what is often referred to as one of their weakest albums, P.O.D. is back with an anticipated new record. The styles found on Murdered Love echo previous albums such as Southtown and Satellite. Lyrically, this album is one of their boldest when it comes to speaking out about their faith, with just a few "party band" tracks included. Some of the album highlights are "Murdered Love," which is an aggressive track about the Crucifixion of Jesus and "Higher," which is a rap-infused/melodic track where lead singer Sonny Sandoval sings about Heaven, and his anticipation to spend eternity with God. P.O.D. slows things down on "Beautiful", where Sandoval sings about a girl who cuts herself to relieve the pain in her life, and he's telling her (and everyone) that "Life is beautiful, share a little love with the whole wide world." And "You're beautiful to me." "On Fire" sounds similar in content and style to Thousand Foot Krutch's "I Get Wicked," and would almost fit on their new record better than P.O.D.'s. "Panic and Run" closes the album on the Christian retail version, and opens to wildlife sounds and has a "punk rock/reggae" vibe which then goes into a metalcore bridge. The bonus track found on the mainstream release, and also the most controversial track, "I Am," has several bleeped f-words laced within the song. The song itself has a redeeming message, a sinner looking for grace and rescue, but unfortunately the swearing overshadows it. While this album features some of their strongest work to date, it also has their weakest. "West Coast Rock Steady" and "Bad Boy" are among the latter. Still, Murdered Love is quite an improvement from Angels and Serpents, and if listeners will look past the controversy associated with "I Am", they'll be sure to find some gems on here. - Cortney Warner, 6/8/12