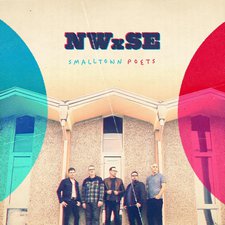 
As we've celebrated 25 years of JFH throughout 2021, one thought has surely struck many of us: "Wow, 25 years is a really long time." Yet, it was actually more than 25 years ago that the quintet of Michael Johnston, Byron Goggin, Danny Stephens, Kevin Breuner, and Miguel DeJesus first came together in Georgia as Villanelle, followed quickly by a well-advised name change to Smalltown Poets. They signed to ForeFront Records and produced a brand of very 1990's Christian lite-alternative rock with a bit of a clever lyrical edge and, particularly on sophomore 1998 release Listen Closely, very Christ-centered lyrics. After the first two albums, numerous lineup changes, and two more albums, the band halted for a 2004 hiatus, but the opportunity to make a Christmas album reunited the five original members (some who had been away from each other more than a decade at this point). And since 2011, Smalltown Poets in its original five-member form has continued to release what I would describe as very pleasant pop rock music, including two Christmas albums, an EP, and 2018's full-length album, Say Hello. Their newest release, NWxSE, is not just a pleasant album, but a great one, and one of the best surprises of the year to date.

Recorded virtually with the five members scattered between the northwest and southeast regions of the US (hence the album name), the album begins extremely strong with the dense and moody "See the Future," with sweeping guitar textures that blow in like the warm wind of the chorus's lyrics. With its minor key and claustrophobic and urgent drum sound, it's a grabber of an opening track and instantly more memorable than anything on Say Hello. Second track "Believe Me" is an outstandingly catchy and driving single tinged with a bit of vocal melancholy, building on an unassuming organ into one of the best anthemic-sounding choruses of 2021 to date. Though I found these first two tracks to be the strongest, the album is hardly front-loaded; the band gets into grittier rock with "Real Time," and features a sunny guitar hook in the upbeat and infectious "Monaco," while also exploring a more solemn and thoughtful tone with "Always Loved You" and "Love Is the Ocean." The guitar and keyboard sounds are intriguingly varied throughout; Danny Stephens' keys particularly have never been used to such great effect. The composition effort and outstanding mix creates the sound of a band that spent a great deal of time in the same room with each other working on music -- quite a feat, considering we know the opposite to be the case here.

Not every song resonates as well as the strongest tracks; "Couldn't See It" leans a little too hard into a processed, alternative sound in its verse and is a little too down-tempo to be interesting, and the awkwardly named "Stuff We Love" is a major-key poppy song that would be perfectly at home on an older SP release, but is among the least memorable here. Lyrically, NWxSE mostly stays a fair distance from the cleverness of the band's earliest works, and though prone to occasionally questionable moments of silliness ("Every wave of the ocean / is a salty solution"), when the veneer is stripped down and Johnston pours his honest heart out, it has a deep emotional impact that this band has not previously reached. "I'm climbing a prayer wall / where no sound is breaking through" from "Always Loved You" is a portrait of tired vulnerability that everyone can probably relate to in 2021. Even more raw is the moving piano-backed closer, "27," and its plea ("I know who you are / I know who you've always been / come sing over me so I can breathe again") is not so much worship as a prayer of desperation. This is a masterful vocal performance by Michael Johnston, for years an underrated lead singer, relying here on sincerity and tenderness in a way he never has.

Vulnerable, desperate, unsettling -- not the vibe you are likely expecting from a new Smalltown Poets release. One of my fellow JFH writers commented that it made them sad, and I can certainly appreciate how that may be a negative for a listener. For me personally, 2021 has already been by far the saddest and most frustrating year of my life. Nothing in life, or faith, feels simple these days and I found within NWxSE an emotional connection to the difficulties I'm experiencing on a daily basis. This is certainly not the Smalltown Poets of "Everything I Hate" or "Gloria," and it's not even the 2018 Smalltown Poets of "Song of Hallelujah." Instead, it feels like the most sincere and mature version of a band not afraid to climb out of its comfort zone. Without question, 25 years is in fact a really long time, but the same five nearly-teens who brought us "Prophet Priest & King" during much simpler times sound completely reborn, somehow now making the best music of their lengthy career. NWxSE is a musical processing of the sadness and frustration that many of us feel in present-times, a timely and thoughtful reflection on faith and distance, and an album of surprising musical cohesiveness and depth. It gets better with every listen and is one of the most pleasant surprises of 2021.