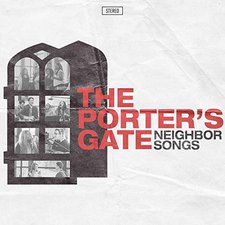 
Two years ago, Isaac Wardell provided Christian audiences with a thesis for his worship collective known as The Porter's Gate. Work Songs was not only an ecumenical call to vocationally live as Christ, it was a musical tour de force. Its simplicity made for an album that was easy to pick up and sing along with, and its beauty made for an album that artistically elevated itself above typical worship fare. That first album birthed exciting promise for what's possible in worship music, and now, we have Neighbor Songs. Although not as melodiously engaging as their previous effort, Neighbor Songs is grander, seasonable, and it cements the prophetic voice that this collective is bent on speaking out.

The disappointing elephant in the room that we must address is that "neighborliness" is something that has been taken captive by the modern political climate. Thankfully, this album works hard to de-stigmatize the concept by reminding us that it is in our tradition and mission to "heal the land, meet the need, set the captives free." Starting out with gang-led harmonies, "Blessed Are The Merciful" sets this tone well, as it is a reaffirmation that God is constantly working on us so that He may work through us. From there, we are encouraged by the simple magnetism of Audrey Assad's performance that there is "Nothing To Fear" since God is always with us. Throughout the rest of the album, we are consistently reminded that neighborliness is born out of the greatest commandment. That being said, the lyricists behind this work are willing to acknowledge that love itself requires more than positive feelings and prayers. "Jesus, Bread of Life" paints us a portrait of dramatic hospitality: truly being able to give all you have because Jesus will multiply that giving. It's safe to say that The Porter's Gate is still making music that is intent on challenging us as Christ-followers.

The live service sound initiated on Work Songs hasn't changed much. Most of the album is led by either an acoustic guitar or a piano, though there is much more energy present here. The gospel-inspired "The Earth Shall Know," Beatles-inspired piano ballad "Love Will Never Fail," and Josh Garrels groove-hymn "Daughters of Zion" provide the sonic variety that the album needs. Still, the musical aspect of the songwriting is the primary quality difference between the two albums. The performances are tight and appropriately understated, but they are generally not as memorable this time around. The most unique difference comes from the structure of the album, as it's broken up into thirds by Latin-guitar ballads from the enchanting Diana Gameros. Each of these tracks are true aural standouts, and ending the album with a song ("En Comunidad") that is almost entirely in Spanish is both beautiful and risky, and probably the perfect way to do so.

When I interviewed Isaac Wardell two years ago, he explained that the name of the collective comes from the Benedictine monks who would take people in. It was the duty of the porter at the gate to be on the lookout for those who needed sanctuary. In that sense, Neighbor Songs more acutely underlines the dramatic urgency that we must live our lives with. Even if it is not as musically memorable as their debut, it is just as inspiring and even more timely, and the lessons it graces us with are for all to hear.

With Neighbor Songs, The Porters Gate has gifted another timely offering of collaborative tunes for the church to be uplifted and mobilized to gospel action. Following up their excellent 2017 release, Work Songs, they return with inward directed encouragement for Christ-followers, and then a gentle challenge to look outward as a community toward the world in need. These are powerful songs, not to be overlooked due to their subtlety. They are true, noble, beautiful, relevant and answer the desperate cries of humanity that is plagued with loneliness. The musical approach is primarily understated, though when listening closely, the songs are deeply satisfying and inspirational. Community is the undergirded theme of the record, and it is woven throughout the album from the co-written songs, trade-off vocals, and lyrics urging the listener to take the gospel outside of the walls of the church, to the community at large. Highly featured throughout are subdued pianos, acoustic guitars, strings, organ, a light smattering of horns, and achingly beautiful vocals from a diverse cast of singers. No song overstays its welcome, with the longest track clocking in at 4:33 in length. This is a nice change up in the genre not typically known for its brevity, and had me on the hook, looking forward to repeat listens. The whole album is a highlight, but I returned to the trio, He Is Among Us (The Least Of Us), Teach Us Your Ways, and Daughters Of Zion (Reprise) the most. There really is not a weak track on this album, with each one cohesively supporting the theme and tone of each other, and culminating with the tender guitar-picked, bi-lingual closer En Comunidad. All in all, Neighbor Songs is one of the best, if not the best overall worship-based album of 2019. Give this whole album a listen with headphones to catch all the nuances. This one cannot be recommended enough. - Review date: 10/24/19, Josh Balogh of Jesusfreakhideout.com