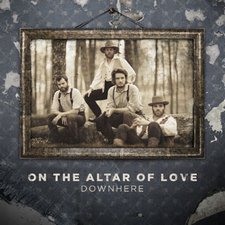 Downhere
On The Altar Of Love

For over a decade, Downhere has been making critically acclaimed records that deliver ministry-focused lyrics with a creative, pop-rock style. Their music has won a loyal fanbase and a number of awards over the years, but several popular singles from their 2008 album Ending is Beginning took their songs to a wider audience, as well as continued to evolve their sound in a more pop direction. Though described as the most "pop-friendly" project in their career, Downhere's sixth major studio album, On the Altar of Love, is not one that fits lightweight stereotypes. Instead, they build an anthemic sound that is layered and musically diverse, while keeping their straightforward songwriting fresh and sincere.

No matter how much their style evolves, Downhere's sound remains rooted in the work of co-vocalists Jason Germain and Marc Martel. Germain's gritty rock-singer edge and Martel's high-flying falsettos anchor the songs, complementing and balancing each other with equal strength, never overpowering each other. Though Martel's big voice can steal the spotlight, carrying songs like "Let Me Rediscover You" and "Altar of Love" to intense heights, Germain gets plenty of opportunity to shine, particularly in the gentle encouragement of "Glory by the Way of Shame" and his impassioned performance of "For Love."

Part of Downhere's appeal is an artistry of sound that's difficult to define, even in their most pop moments. On the Altar of Love marries elements of chamber pop, alternative rock, and even a touch of Americana folk for a sound more expansive than expected from a four-piece band. This isn't a highly upbeat record; with the exception of a few tracks, big ballads and serious moments dominate, but the building layers of sound are stirring. Words like "cinematic" or "theatrical" come to mind, but not in a cheesy, contrived sense. For example, the lead single "Let Me Rediscover You" almost sounds like a dramatic 90s ballad on the first impression, but multiple listens reveal the raw passion and longing in every note, and the music blends into something textured and lovely.

It's not all serious, however. "Living the Dream" is a playful nod to the Queen-esque style that fully embraces Martel's Freddie Mercury comparisons, similar to "My Last Amen" on their previous release. It's fun and delightful, and serves as both a counterpoint and lead-in to "Seek," one of the heaviest and most musically diverse tracks on the record. Germain and Martel deliver amazing vocal harmony in this one, and despite the driving rock anthem style, some well-hidden fiddles and banjos give a surprising texture to the song's bridge. Those Americana staple instruments make a more prominent return in "Altar of Love," a full-fledged folk tune in the vein of Mumford & Sons. The Germain-led closer "Reveal the Kingdom" turns the sound somber and classical, backed by Martel's harmony and an elegant swell of strings.

As for the lyrics, the focus is as ministry-minded as ever, but this time they shift the focus more on celebrating and proclaiming their heritage of faith. "Glory by the Way of Shame" highlights the human side of it, gently telling the stories of a prodigal and cheating wife, and how forgiveness turns their failure into beauty. Though the stories may be fiction, as the last verse says, the words turn inward, acknowledging "But in my own heart I know it goes much the same." Many lyrics, such as "Rest," are lifted straight from Scripture, and then there are the unconventional metphors, as in "Seek" describing the furious love of God "like a kid with a crush." "For the Heartbreak" and "For Life" are a standout set of tracks for their similar, but contrasting themes and styles. The former is light and upbeat, led by Martel singing, "Thank you for the heartbreak / Thank you for the pain... Thank you for the healing that makes the beauty shine," but the latter, in one of the album's most beautiful moments, takes a darker musical tone even though it lists the beautiful things worth our gratitude: "Thank you God for the open skies / The mysterious depths of her ocean eyes / Thank you for my dreams / Dreams of poetry both tragic and beautiful / Thank you for life."

It's the beauty of the music and the honesty of the lyrics bound together in two splendid voices that makes On the Altar of Love something more powerful and memorable than the average CCM pop record. While it may be a slightly different sound from Downhere, it's a wonderful addition to their catalog that only gets better with more listens and could be a late summer sleeper hit. Whether a longtime "downhomie" or brand new listener, On the Altar of Love is music worth discovering.

Canada's Downhere continue to prove themselves the "A" students of Christian Music, consistently turning in interesting yet accessible records year after year. Their new project, On The Altar Of Love, continues this streak. The album offers a musical stew that mixes the bombast of Queen and the driving rhythms of The Police and U2 with a few left field choices. Songs like the chirpy, 60's British pop of "Living The Dream" and the French Canadian folk music of the epic title track gives On The Altar Of Love a satisfyingly unique sound that is held together by the terrific voices and harmonies of lead singers Marc Martel and Jason Germain.

But it's the lyrics that earn this band its top grade. The album artfully examines the question of why believers do what they do, and that although we may not always understand God's ways, we can step out in faith because His love is always there "like the sun through shut eyes."

The combination of clever musical choices and deeply poetic and thoughtful lyrics makes On The Altar Of Love one of the best releases of the year and earns Downhere another "A" on their report card. - Tincan Caldwell, 8/19/11
class="coversize" align=right> Early Thoughts...

Though described as the most "pop-friendly" record in their decade-long career, Downhere's sixth major studio album On the Altar of Love is not one that fits the lightweight stereotypes of pop music. Instead, they build an anthemic sound that is layered and musically diverse, while keeping their straightforward, ministry-focused lyrics fresh and sincere. On the Altar of Love is made up of twelve songs that explore big-sounding ballads and worshipful moments, while still making room for some surprises, like a nod to Queen-esque pop in "Living the Dream," the driving rock of "Seek" or the folky vibe of the title track. Co-vocalists Jason Germain and Marc Martel give the record the signature Downhere sound, with Germain's gritty rock-singer edge and Martel's high-flying falsettos balancing and complementing each other with equal strength. This is one that only gets better with more listens, and just might be a late summer sleeper hit. Whether a longtime "downhomie" or brand new listener, On the Altar of Love is music worth discovering... - PReview date: 7/17/11, written by Jen Rose of Jesusfreakhideout.com --->