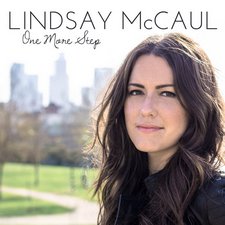 Life can change so much in a short amount of time, and for Lindsay McCaul, that statement is not just a cliché. Over the past two years since her debut album released, the promising new artist saw a lot of big life changes. From great personal loss of family members, to a long distance move and a new label home, these many altered paths converge on her newest release, One More Step. There's a touch more pop gloss over some of the tracks this time around, but the songs themselves stay true to her writer's heart, and tell the stories of God's faithfulness every step of the way.

The album opens with a pair of upbeat pop songs, the kind that shimmer with mass appeal. "Empty Handed" leads the way as the record's first radio single, but despite the driving beat and catchy hook, it sets the record's deeper emotional tone as well. Her vocals are understated and joyful, but her lyrics admit total dependence, having nothing to bring but open hands before God. It's the best place to begin for an album about the unfolding story of God's provision, and that theme continues with "A Little," a song that delivers a singable pop hook and the assurance that "a little faith, little love / will be more than enough." These two are a good bit more layered and less hushed than her debut, and in that respect more radio friendly, but they certainly aren't throwaway tracks in the record's greater journey.

Her earnest and gentle delivery was one of the most endearing aspects of her music before, and that vibe is preserved for the bulk of this album. Some of the highlights on the poppier side are "The In Between," a song about trusting God while waiting through uncertainty, and the playful, ukelele-driven "Mess Like Me," a song with a self-explanatory title. Perhaps two of the most powerful moments, though, come in a pair of ballads within the album's first half.

"One More Step" is a highlight for sure, and its personal nature makes a unique choice for a title track. Written for her late father, it tells the story of their relationship with all the marks of a traditional father/daughter song -- walking through memories of a toddler's stumbling steps and a woman's wedding day -- yet the personal connection and sincere closing verse of this piano ballad save it from falling into sentimentality, and could possibly mark it as a future classic. It's appropriate that the following track, "With the Brokenhearted," a duet with Brandon Heath, offers the comfort of a reminder of God's closeness in the midst of a broken heart. The pain of loss and the comfort of mercy meet in these two songs, and they form the heartbeat of this record.

Lindsay McCaul's earlier album was impressive in its mature songwriting and understated, organic sound, and One More Step does not disappoint as a followup. It doesn't beg to stand out, become a hit record, or try to reinvent her art, but it does mark a progression in the right direction and offers an encouraging collection of honest songs for those willing to spend time listening. For that, it's another step in a bright future career, and a lovely re-introduction to a writer worth getting to know.