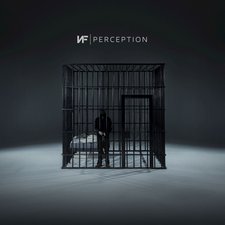 
When Michigan rapper Nate Feuerstein (stage name NF) first dropped his debut LP, Mansion, just two years ago, he struck a resonating chord with critics and listeners alike. Up until this point, there had been few quality rappers within the Christian music industry sporting the aggressive, contentious style made popular over the last two decades by mainstream rappers such as Eminem. From the very beginning, NF drew excessive amounts of comparison to his Detroit counterpart, much of which was over-exaggerated. Although their styles shared more than a few similarities, it was what differentiated them that delivered such potency to NF. He would rap about real life, real struggles, and real darkness. Having dealt with childhood abuse and the death of his mother, these realities weren't always resolved. His Christian faith, however, often shined through, providing listeners with a strong sense of hope in place of despair or apathy.

In my review of last year's Therapy Session, my central critique revolved around the sophomore album's underdevelopment and coadjuvant bloat. The many qualities found on Therapy Session were shadowed by these faults, all of which could have been avoided had the album spent an adequate amount of time in development. Needless to say, concern was raised when this latest LP, Perception, released only a year later.

NF kicks off his third LP with--you guessed it--"Intro III." He takes less of a power-house approach here than he did with the two previous intros, choosing instead to stage an odd, psychotic conversation between himself and his fear. For an artist so often compared to Eminem, this split-personality approach does him few favors. It could also be compared with Twenty One Pilots' Blurryface album, which, ironically, he seems to diss later on the album during the track "Know" ("I'm a little bit TØP Stressed Out / what does that mean? / I'm a rap fiend with a bad lead"). Throwing a reference to Mansion's title track, he drops the line "Hey, I'm NF / 'Is it me or the fear talkin'?' / Ha! What a dumb question!" It's clear that what NF is trying to do here is actually quite clever; the singular moment when this reality shines through is during the "grave-digging" sequence. Unfortunately, it doesn't quite come together and ends up being little more than laughable.

"Outcast" is pretty standard-fare for NF, but it serves to do little more than set a moderately low bar for the rest of the album. The amount of boasting and the insults directed at other artists is far from classy, but this trend is really just priming listeners for the latter half of the album. "10 Feet Down" is perhaps one of Perception's most disappointing offerings. NF's verses and flows are on-point here, but the song also guest features Ruelle. The bizarre digitization of her irrelevant, silly lyrics ("Hot days, cold nights / staring down at an empty cup like, / I'ma fill, I'ma fill it up / the good life doesn't seem so bad / the good life doesn't seem so sad") detract from the piece in an unprecedented manner, creating one of the album's most obnoxious tracks, which is quite an accomplishment.

"Green Lights" can be a polarizing track. He takes a different approach to his style here, which I don't personally enjoy. However, he does it well, so my own bias here will likely be irrelevant to some readers. "Dreams" isn't much better, and while the lyrics are decently respectable, his flow sounds like a carbon copy of artists heard on the last few year's pop radio hits (think of Justin Bieber's "Sorry").

Ironically enough, "Let You Down" is about the only track here which doesn't. One of NF's strengths has always been how he's able to pair his flow with some clean vocals. He has a unique and exceptional voice; something he could easily afford to lean on more. This piece has a strong flow, crisp vocals, and cutting lyrics ("walking towards you with my head down / lookin' at the ground, I'm embarrassed for you / paranoia, what did I do wrong this time? / that's parents for you, very loyal? / shoulda had my back, but you put a knife into my hands before / what else should I carry for you? I cared for you, but").

Unfortunately, "Destiny" fails to make much of an impact, and "My Life" has some rather grating backing music. "You're Special" is an okay track, and fits in perfectly with contemporary mainstream radio. "If You Want Love" is easily the second-best track on the album. Its honest, insightful lyrics can resonate with all listeners ("if you want love, you gon' have to go through the pain / if you want life, you gon' have to learn how to change / if you want trust, you gon' have to give some away"). It harkens back to (and seemingly references) the track on his 2014 EP, "Thing Called Love," one of my favorite NF tracks. "Remember This" is the final quality track offered on Perception. Bringing quality lyrics and ponderings to the table, it delivers a bit of what this album should have been.

From here on out, the remaining songs are hardly worth mentioning, full of awkward brag tracks and self-centered gripes. "Outro" has a good flow, but its lyrics are far from quality. He even references his differentiation from Eminem, yet all the while tries to duplicate the secular rapper and still boast about how original his own music is.

Ultimately, Perception essentially consists of NF spending an hour yelling at listeners about his thinly-veiled insecurities while simultaneously bragging about how great he is. There are a few glimmers of quality scattered throughout the album, but it grows increasingly hard to look over its continued inadequacies. It became clear that the album was going to go off the rails when on "Outcast," he dropped the lines "Same style, but the songs are better / been a year and a half, feels like he's gone forever." No, NF. It hasn't been forever. You just dropped a barely-above-average album last year, and the songs here are most decidedly not "better." Finally, when he goes off and claims "the fact that you think I'm average is maddening," it's almost as if he never considers how maddening it is that he's choosing to be average. NF exercises neither patience nor humility on Perception, and until he sorts those issues out, the quality of his releases will only continue to plummet.

The biggest difference between Therapy Session and Perception is that NF has turned up the mainstream elements, which, as we've already seen, has helped to boost his album sales. He's also turned down the "Christian" aspect in what seems to be a struggle for relevancy. Perhaps he's found it, but it would be worth it for NF to ask what he's lost in the process. In truth, I would rather not see another LP from NF slide across my desk until 2020, when perhaps some hindsight (and a little humility) has finally kicked in. Until then, the tracks worth checking out are "Let You Down," "If You Want Love," and "Remember This."

One of the greatest things about music is genres; there isn't one hard fast rule in order to love and appreciate music. NF is not only a rapper, but one that is clearly in a specific niche. He's definitely not for everyone, but for those who enjoy his style, he is amazing. NF is gritty, vulnerable, and has no problem sharing his thoughts, and Perception falls right in line with what we have come to expect from the Michigan native. The 60-minute journey starts with "Intro III," a perfect welcome to any NF release that showcases his ability to draw listeners into his world in ways that aren't matched by many. "Let You Down" and "Outcast" speak on personal struggles that can come along as we journey through life making mistakes. Another highlight would be "My Life," where Feuerstein depicts his troublesome upbringing offering perspective to others who find themselves in similar situations. Ending this album is "Outro," which is NF at his best. He spits fire over symphonic beats while speaking exactly what he thinks. While not every track listed here is stellar, most can be played without being skipped. The biggest flaw with Perception would be that it's very one-dimensional, but I'm not sure that's as much a flaw as it is just NF's style. Perception does not offer fans anything exceptionally new, but current fans will truly appreciate the fire Nate spits on these highly emotional rap tunes. As always, the thematic production is easily noticed making this a complete NF album, even though it falls short of his previous discography. If you didn't like NF before, this will not change your mind, but if you enjoyed Mansion or Therapy Session, you are sure to love Perception. - Kevin Hoskins, 10/6/17