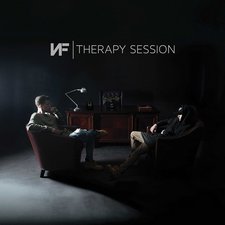 
Within a single year, Christian rap artist NF has made quite a name for himself. Aside from a few underexposed EPs and independent releases, 2015's Mansion was the world's first real exposure to the 23-year-old Michigan rapper. Last year's release introduced a surprisingly forceful (at least within the Christian subgenre) form of rap, with fast-paced rhythms, aggressive lyrics and emotional ballads. Often compared to Eminem, NF isn't unfamiliar with controversy, and his latest project, Therapy Session, isn't likely to shift that reputation.

The album opens up with "Intro 2," a continuation of "Intro" off of Mansion. While nearly a carbon copy, it doesn't quite pack quite the punch of its predecessor. Within the opening lines of the album, NF identifies the stigma of the sophomore slump, stating "I'm back, did anyone miss me? / They said the second record can be tricky / well that's kind of funny cause I am not tripping." The title track ("Therapy Session") shows up immediately after the introduction, and it certainly packs a punch. The lyrics are incredibly honest and carry with them a weight of sophistication previously unseen by the rapper: "I know I handle some things immaturely / I know that I need to grow in maturity / I ain't gon' walk on these stages in front of these people / and act like I live my life perfectly / that doesn't work for me / 'Christian' is not the definition of a perfect me." He closes the track with an extended monologue, thus kicking off his therapy session: "I write about life, I write about things that I'm actually dealing with; something that I'm actually experiencing, this is real for me. I need this, this is a therapy for me."

The album's third track and first single is the sentimental "I Just Wanna Know." The piece explores the relational rifts which can occur between people and the subsequent pain of working through them. The hook is quite catchy, and while the verses show NF demonstrating a healthy dose of control, he's not holding back. "How Could You Leave Us" is one of the most emotional tracks on the album, even apart from the sobbing in the background and tearful extro. Here, we see him dealing with the loss of his mother, "Our last conversation, you were sat in the living room / talking 'bout my music and I brought you something to listen to / you started crying, telling me this isn't you / couple weeks later, guess you were singing a different tune / you took them pills for the last time, didn't you? / they took you from us once, guess they came back to finish you."

"Oh Lord" is one of Therapy Session's best tracks, with the song's structure continually adapting throughout. NF opens in a slower, more rhythmic fashion akin to Paul Wright, before heavily dropping in on the third verse, questioning our collective view of God, "It's easy to blame God but harder to fix things  you see, the same God that you're saying might not even exist becomes real to us but only when we're dying in bed." Songs such as "Grindin'" and "All I Do" exhibit some of NF's growth as an artist, especially on the latter, where he competently dabbles with trap elements.

The album's real gem comes in the form of its closing song, "Lost in the Moment," featuring CCM soul artist Jonathan Thulin. Stylistically, this track is quite similar to some of NF's material off of Mansion, but feels far better developed. Thulin's hook is incredibly simple, yet pairs perfectly with NF's flow. The lyrics are profound and heavy-hitting, showcasing some of NF's strongest elements. The album closes with one of Thulin's signature vocal runs and the fading lines, "this may be the last song that I'll sing / so I'll take it in / this may be the last day that I'll breathe / so I'll breathe it in, I'll breathe it in."

After last year's bout with various Christian media review groups, NF has definitely gone on the defensive. Within Therapy Session's lyrics, he addresses prior album reviews and seems to feel the need to excessively explain himself to his critics. While this isn't particularly grating, it does feel a bit cumbersome when his lyrics could already be considered quite self-centric. Within the theme of this album, though, it makes sense that he talks a lot about his own life and experiences. Part of Therapy Session's appeal is its attitude of inward reflection while working through past hurts and personal struggles.

Ultimately, Therapy Session is an excellent album and borderline concept project, but it doesn't feel "finished." Some of the tracks seem a bit out of place, and while I don't think I've ever complained about an album being too long, Therapy Session pushes that limit at 14 tracks totalling almost an hour. The album's digestibility would be greatly improved if a couple of tracks were taken off of the roster. While nothing here is bad, subtracting a few pieces could have added more emphasis to others.

In no way is NF lacking in talent or creativity, but he could afford to exercise a tad more patience. This album doesn't seem quite ready for release, evidenced by the short, one-year gap between Mansion and Therapy Session. Regardless, NF has blown past the sophomore slump, creating a project well-worth listening to.

NF has probably been the most talked about rapper over the last year, gaining many fans and just as many criticisms along the way. His music is raw, serious and in your face, and if you're not a fan of that, you will not enjoy Therapy Session. However, if you are looking for something different from your everyday CHH, this may be exactly what you are looking for.

"Intro 2" perfectly picks up where "Intro" left off with a simply banging emotional welcoming to NF and his "Therapy Session." The title track follows with NF rapping fluidly over a haunting chorus in a song that speaks of the growth the he needs, but also realizing that he is being as real as he can be. "How Could You Leave Us" is one of the most emotionally gripping tracks I have heard in a long time as Nate opens his heart and past like a book for all of us to read with the ending product being absolutely stunning. Other standout tracks would be "I Can Feel It," where he raps with ferocity, "Grinding" which features new labelmate Marty of Social Club Misfits, and "All I Do," where he humorously takes shot at himself while chanting "I feel like LeBron," and as an avid NBA fan, I feel is superbly clever.

There are some softer sides to Therapy Session, too, such as "Oh Lord," which speaks to people who beg for God to be around at their own convenience, and "Lost In The Moment," which concludes the album with a stellar track speaking on relationship struggles. Not every song listed is stellar, but there isn't anything skip-worthy, either. Many are not going to like the pure raw emotions here, but I am a fan of someone who can offer something outside of the box and this fits that bill perfectly. - Review date: 4/20/16, Kevin Hoskins

Wow, does NF know how to make a memorable album! As if Mansion wasn't enough of an excursion inside his mind, Therepy Session digs even more into Nate Feuerstein's difficult past and encompassing passions like no other rapper in the Christian music industry. And his message is like no other Christian rapper; he is a broken, imperfect man for whom music is how he deals with life, his outlet, and his way of communicating. He will work himself to the bone for his music, and he doesn't care what anyone else thinks of that. I can get on board with that, but in his effort to communicate that message, NF runs into two pretty big problems. First, six or seven of the 14 songs within address, either fully or in part, his critics. If he really doesn't care about what his critics say, then why bring it up so much? It feels like a contradiction. Secondly, going out of his way to point out his own imperfections feels like (and I am sure he doesn't intend this, but this is how it comes across) he takes pride in them. But, then again, this is a therapy session. Don't we all unload garbage and contradictions in a therapy session? Personally, I'm ambivalent towards NF's approach, but it makes for a good, thoughtful, and memorable listen. I do hope. however, for NF's sake, that he experiences some personal growth before his next album so another dark excursion isn't necessary. - 4/22/16, Mark Rice of Jesusfreakhideout.com

It was just over a year ago when NF exploded into the scene with his darkly personal debut. Mansion was an album that left many either unimpressed or awestruck. Its follow-up, Therapy Session, is a strong step forward and delves into even darker themes. Uncomfortable subjects such as the struggle of an absent parent in "How Could You Leave Us" and the uncertainty of a relationship in "I Just Wanna Know" are among the most prominent examples. The tracks on Therapy Session are lyrically and musically stellar and easily some of NF's best work to date, but it isn't perfect. "Got You On My Mind," "Wish You Wouldn't" and especially "Statement," fail to leave much of an impression, but these exceptions make up only a small portion of an album full of stunning tracks. Therapy Session may be one of the year's most memorable rap albums, but I have a feeling it only scratches the surface of NF's talent. - 4/25/16, Lucas Munachen of Jesusfreakhideout.com

NF's raw emotion and self-praised rapping ability may be a tough pill for some to swallow, but like Mansion, Therapy Session is a rewarding and refreshingly honest listen if you can embrace it. Except for "How Could You Leave Us," which is NF's most personal song to date, the 14 tracks here don't quite pack quite the same powerful punch as his debut. Nonetheless, the solid bars, simplistic yet cinematic production, and honest songwriting make this a solid and memorable sophomore release. Any NF fan will not want to miss their appointment with Therapy Session. - 5/3/16, Christopher Smith of Jesusfreakhideout.com