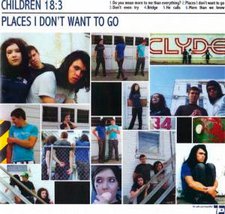 Children 18:3 have proven that they can produce energetic pop/punk and rock songs that crowds will love to mosh to. Their self-titled debut with Tooth and Nail was a was a collection of dark rock songs that sped along at a terrifying pace. Their second record, Rains 'A Comin', did not disappoint, showing a musical maturity and better production. Let's take a second to look back at their independently released EP from 2004, Places I Don't Want To Go.

Places I Don't Want to Go is a very enjoyable record to listen to. I would recommend any current Children 18:3 fans to listen to it if they can get their hands on a copy. As a whole, it's lighter than Children's Tooth and Nail records. It may remind you of early MxPx records with its rich, vivid tone. It definitely has a young, 'high school' vibe. David and Lee Marie's voices are not as polished, but the musicianship and songwriting are very strong for an up and coming band.

The first song, "Do You Mean More To Me Than Everything," starts out the record with passionate wails from David questioning his own love for God. It is backed by a pulsing beat and strong backup vocals from Lee Marie. Seth shows his ability to keep the song on course with a strong punk beat. David also throws in a nice guitar solo towards the end of the song.

"Places I Don't Want To Go" and "Don't Even Try" delve into the believer's struggle with temptation. Both are fast songs that will keep listeners rocking their heads and singing along. David and Lee Marie manage to create catchy choruses while jumping in and out from lead to backup vocals. The vocals are very prominent in the mix, giving you the feeling that David and Lee Marie are right in front of you delivering their defiant yells in your face. The raw delivery ensures that the listener doesn't lose any of the emotion of the song.

"Bridge" is a slower song that features Lee Marie on lead vocals. It explains how Jesus has made a way for us to be in a relationship with God in thoughtful, poetic language. The guitars keep things chugging along making sure that things don't get too slow. The last two songs, "He Calls" and "More Than We Know" are where things get shaky. The vocals aren't nearly as sharp as the other songs and they come off as rather gloomy. The slower, more contemplative sound isn't executed very well, although David does throw in a cool solo in "More Than We Know."

Overall, the EP is a very good effort for a young band looking to make music their career. Their songwriting showed a lot of potential, giving listeners fun, catchy choruses while making them think about some of the deeper issues of life.