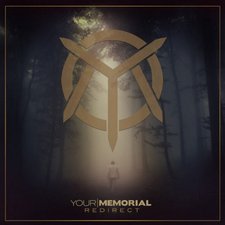 Minnesota metal band, Your Memorial, is back with their second album on Facedown Records. In recent years, Facedown has been pumping out solid metal material and one can only hope that this band can carry on with the trend. Redirect is their newest metal endeavor as they attempt to draw all of their influences into a worthy collection of songs.

The album starts off soft with some ambience on the track "Transfiguration." A voice comes on after several seconds and talks about what the Christian life is by saying, "The Christian life is simply a process of having your natural self change into a Christ self." The voice continues on a bit and sounds like something you would hear on some sort of old documentary or educational film. From there, the sound eventually builds into the title track. "Redirect" brings to light something that holds true through much of the album. While the production is good, for the most part, the album does not feel over-produced. The guitar riffs and chugs on most of the record sound believable and not something cut so clean that it sounds like it came from a computer. The same statement goes for the drums as well. One of the biggest problems any genre of music faces today is over-production. Labels and studios seem to want a "perfect" sound, but too many times it takes away from the rawness of a band; especially in the metal genres. After two quick metal tracks, the album shifts into the instrumental "The Substance of Things Hoped For."

After the short, one-minute instrumental, the Twin Cities natives jump back into the metal barrage with "Eternity." This is one of the occasions where it feels as if a little over-production seems to seep in, but the track holds its own. From there, "Change the World" starts with some guitar feedback and a tribal type drum beat. "Change the World" stands out with "Redirect" and the next track, "Transform," as notable songs on the album. The sounds of "Transform" are a bit of a melting pot; musically, it's not a very heavy song. The vocals make it feel heavier, but that is only until the clean vocals answer the screams. The guitar lead played in the background the entire time also sets it off nicely. What really makes you take notice is when the music dies completely for about ten seconds. The time is filled with ambience, what almost sounds like chirping birds and three simple notes plucked on a clean electric guitar.

"Anthem" isn't necessarily a bad song, but the riff sounds all too familiar. The band tries to add their own spin on it, but you can't help trying to name the songs where you've heard the same riff used in before. After "Anthem" is the second part of the instrumental started earlier with "Evidence of Things Unseen." The much longer instrumental is softer, features clean guitars, and more ambience. The song continues to build and eventually gets into some lightly distorted guitar with large ambient swells. What follows from here is possibly the album's best in "Trial and Triumph." The song starts lightly, but kicks in with a screamed "Rejoice!" twenty seconds in. With "Trial and Triumph," the band finds the best mix of all of their sounds. Disappointingly, the album is ended with yet another instrumental**. While "Cadence for a King" is the best sounding instrumental on the album, featuring four different sections, it is still another instrumental. For some reason, bands as of late have felt the need to load up on these on their records. [**The song "Legacy" was not provided for us ahead of time as part of the album for review]

While a lot of the riffing and chugging is fairly standard and generic throughout Redirect, Your Memorial is able to throw enough extra in to keep it interesting. Things like clean vocal harmonies underneath harshly growled vocals, interesting softer guitar sections coupled with ambient sounds in the middle of a song, a-la A Hope For Home, or the brighter guitar leads sometimes mixed in with the darker main riff set Your Memorial apart from the pack of cookie-cutter hardcore and metal bands ever so slightly. Your Memorial has some potential for sure, but still has some work to do in order to reach it all. Hopefully their attempt to stand out from the metal norm doesn't have them sounding exactly like other bands experimenting and featuring ambience as a major focus.