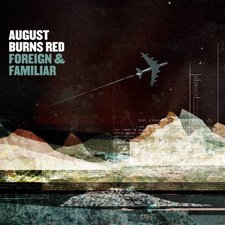 August Burns Red released their most highly successful album earlier this year with Rescue & Restore. Now the fans, or those who haven't purchased the release yet, can have an added bonus that contains a documentary on DVD (or Blu-Ray -- a Best Buy Exclusive). Foreign and Familiar is a documentary that provides an in-depth look at the band's enormous 18-month tour. We see the August Burns Red members having fun, finding ways to get along with each other, supporting their peers, getting to know their fans, giving us a quick summary of places that they perform concerts at, and complications that they had to deal with. Each member of the band gets to reflect on different moments regarding the history of the band, the concerts, and how they make it work. In August Burns Red, you have such dynamic personalities that consist of Matt Greiner (drummer), who is the nice guy who loves to be around all the fans; JB Brubaker (lead guitarist), who is the comical one that seems to make the best of each situation; Jake Luhrs (lead singer), who is very calm and the one that will tell how it is without sugarcoating it; Dustin Davidson (bass guitarist), who also is very calm and easygoing, while at the same time having a very humorous side; and Brent Rambler (rhythm guitar); who seems to have a tremendous amount of patience along with dedication.

There are moments that very serious in the documentary, such as Dustin discovering that his iPhone has been stolen in Spain and, of course, he doesn't seem too thrilled about it. He tries to make light of the situation by substituting his much larger iPad as an iPhone. We see moments where the band shows support to their devoted fans, like a very touching moment taking place in Anaheim, California where a fan from the Make A Wish Foundation flies in from Pennsylvania and shares the set on stage to play drums with the band. Matt follows it with a statement, "I never would have felt the way I felt on stage. I will never forget that, man. That is what it's all about." In Italy, Matt is much honored to have fan show his skills by air drumming the sequence with all the songs in the audience. We see footage of Matt going directly to the fan afterwards and thanking him for his involvement during the show. The hospitality in Okinawa was moving as we hear about military fans stationed there who expressed how the ABR songs have inspired them through day to day events. The band is very humble and doesn't seem to show any signs of conceit. They come across as 5 guys who want to have some fun and just like being around all their fans. It's also really refreshing to see a band use the word "Christian" when referring to the band as Jake Luhrs replied, "We're a Christian Metal Band" to a local in Japan.

It's very understandable that having little to no sleep can have an impact on anyone's daily routine, and August Burns Red makes it very apparent that they are exhausted after traveling on planes and buses nonstop with little sleep as they make their next stop in Manila, the capital of the Philippines to play for 30,000, one of their largest crowds ever. JB Brubaker is probably the one I would label as the funny guy in the group. He is very good with his connection to the audience when talking about the band's events as he describes the concert stage in the Philippines as one that looks like it was designed for Britney Spears. The band is rewarded with a visit in Hawaii where some of the ABR members are able to spend time with their girlfriends. The last remaining shows are located in Reno, NV and cities in California. ABR travel to a very unique facility that they use for a concert in Bogota, Columbia. Luhrs describes it as a disco setting, and the fumes were very difficult to tolerate as we see him holding a hand towel over his face while talking. They close the world tour with a final show in Mexico City, Mexico.

ABR highlights different segments throughout the 232 shows within 36 countries on 5 continents. The pace of this documentary is done very well as it moves along fast enough to where there leaves little to no room for boredom. You really do get a chance to know these guys. The reactions that they have with each other and their fans display some of the most fascinating documentary footage. We see that they are human and they face / react to situations in a manner that we can easily identify with. On the DVD, there is also bonus footage with 16 minutes of outtakes. It's still a worthwhile purchase even if one has already purchased Rescue and Restore earlier this year; Foreign & Familiar shows some remarkable footage of this metal band in concert and could possibly be one of the finest artist documentaries every produced in recent memory.

For our full review of the audio portion of Rescue & Restore, please click here.

Buy It: iTunes (Audio Only)

Buy It: iTunes (Video Only)

Buy It: AmazonMP3 (Audio Only)