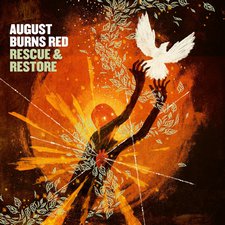 Metal is on its death bed -- or at least that is what the astute observer will argue. At first glance, it would appear that metal is in fact thriving like it never has before: there have never been so many fans; there have never been so many bands. But therein lies the problem. About ten years ago when the sub-genres were really starting to branch off, we had our selection of holy rollers like Blindside, As I Lay Dying, Extol, or Haste the Day while Jimmy was still vocalist. Our selection was limited and glorious. But now there are several "metal" albums out every week. Your options for heavy music are uncountable, yet finding quality music is like finding a needle in the haystack, the very very derivative haystack.

Lancaster, PA's August Burns Red, back then just writing chaotic metalcore like no one had ever heard it before, now giants and kings of their genre, have taken it upon themselves to ignite a revolution under our feet as well as shepherd us in the right direction. Their fifth studio album, Rescue and Restore is their (possibly presumptuous) attempt at educating us on what a metalcore album can sound like when you throw away the cookie cutter. Lead guitarist JB Brubaker is quoted saying "I notice trends in the genre that I'm not really fond of and I was doing my best to avoid those clichés that I see just getting completely overplayed."

Though many of their fans are wishing every time for another Messengers, their progressive morph into what they are now could be seen coming ever since they released "Little Drummer Boy" (a single that shocked or impressed many) several Christmases ago. Rescue and Restore proves that the musicians in ABR can write much more than just breakdowns and blast beats. Exemplified in the second track, "Treatment", they have tried their hand at progressive metal (not Celestial Completion progressive, but still new for ABR), and it has cause to raise a fair few eyebrows. There are straightforward tracks like "Sincerity," "Animals" and "Provision" that keep the fire hot and loud; it's expertly executed metal. Though for most of the album, the word "straightforward" is rather nebulous. Various unorthodox instruments are used once again, including violin in "Spirit Breaker," brass horns, and what I suspect is the Chinese pipa in "Creative Captivity."

But Rescue and Restore is much more than just metal with a few odd interludes sprinkled throughout. That is the real difference between this and Leveler; they've taken it to the next level. Last time, I said that the vocals were really pushed, or the bass had its own identity, but this time, the music as a whole is pushed. There's a metal foundation under it, Jake Luhrs' vocals are still diverse and crisp, Matt Greiner's drumming is still ridiculously energetic, Dustin Davidson's bass is still groovy and extra noticeable. But on top of that is a blended mesh of different styles of metal and different styles of music in general. There are weaker parts than others, but not on a track by track basis. The flavour of every song changes at the drop of a hat. One minute you're listening to a breakdown; the next, samba; the next, the catchiest riff of your life; the next, post-rock; the next, a creepy propaganda speech. But it seldom sounds awkward. Jake Luhrs said about this record, "there's more art to it. It's music instead of being metal."

So is Rescue and Restore ABR's best album? Well, it's not the longest, or the heaviest, but it's certainly the most musically diverse, the most ambitious, and possibly the most relatable lyrically. The album ends with the words "Evolve or die. Move on or drown," which is a call both for the genre to move forward from its stagnant pool and also for humanity to realize its brokenness and accept help from God. "Losing it all let me realize I am the victim, the culprit, the casualty, and the cause. Losing it all led me to you". "Treatment" deals specifically with equality, and how diversity is not a disease. "We're here to say, the world needs more diversity... Stop dwelling on what happens when we die. Start helping all those who are still alive." Other themes include depression ("Spirit Breaker"), dependence on God ("Count It All As Lost"), strength that can be gained from faith ("Beauty In Tragedy"); "I can't hear Your voice, but that's okay, 'cause I can feel You in my heart." But "Creative Captivity" leads the album in musical diversity as well as carrying the mantra for the entire album; "Rescue the beauty that's left. Restore the character that's long since gone, because these colours must never fade. This beat must carry on. We will fight to save this. We will fight to keep it alive. This is a cause worth fighting for."

Leveler, perhaps, asked what metal can be, and did a bit of a sloppy job at answering. Rescue and Restore, however, doesn't just ask what metal can be, it encourages musicians to not just write metal, but to write music, make art. Don't pen yourself in or sell yourself short. Back in the day, August Burns Red wrote magnificent metalcore, but I believe the reason they are more successful than most of their peers can be attributed to their dedication to progression. They haven't just attempted to break metal stereotypes, but also their own.

August Burns Red has returned with another technically sound metalcore album. Their newest effort, Rescue and Restore, features music as solid as expected from an ABR record and the overall product is stepped up a notch from their previous attempt. While the guitars and screaming can sound a little generic at times, the outstanding execution makes it better than most other competitors in the genre. ABR also make a concerted effort to break up the monotony by throwing in new and different things throughout. A couple of examples are the acoustic guitar and violin interlude that starts about 1:57 into "Treatment," and the slower, clean guitar and spoken word section that starts 3:30 into "Spirit Breaker" (there is also a similar section in "Beauty In Tragedy"). Another interesting track of note is the mostly instrumental "Creative Captivity." The beginning of the track is more straightforward metalcore, but fades to a slower and softer section just after the halfway mark. As it picks back up to a rocking pace, it soon turns just a little odd and briefly features what sounds like a marimba. August Burns Red gives you just enough to keep you guessing on each track, but don't go so foreign and out there that you can't recognize them. While Rescue and Restore may not be as good or feature quite the raw energy of an album like Thrill Seeker, songs like "Count It All As Lost," "Animals," and "Echoes" make it a worthwhile venture. This album shows ABR experimenting a bit and refusing to be caught in the miry breakdown-fueled genre that is metalcore. - Michael Weaver, 6/23/13