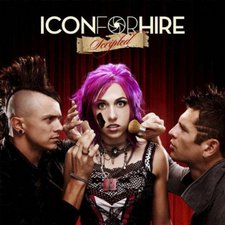 For whatever reason, Tooth & Nail just hasn't really offered that many headline female-fronted artists in their lineup. But last year, we did get a dose of their latest sensation The Letter Black, whose vocals belonged to Sarah Anthony. But like some of the staff on JFH, I found The Letter Black to be generally lacking in sensation. However, on the heels of TLB's first album is the debut of another one of T&N's recent signings, Icon For Hire. This girl driven trio is poised to offer steady rock tunes with an edge in their first project, Scripted.

So why should you be interested in Scripted? Well, the vocals for one thing. Lead singer Ariel's voice runs seamlessly through the tunes without ever going overboard like her fellow label mates in The Letter Black. Aside from her gifted voice, the production is sharp, and flaws are few and far between. Icon For Hire has a good, clean, fast-paced approach to their rock music, and their album overall is quite enjoyable. However, the reason you shouldn't be interested in the trio is the fact that you have heard it all before. The band borrows their elements from other female fronted acts like Flyleaf, Fireflight, and Paramore at an alarming degree.

With some synth alongside, the first single "Make A Move" provides a good reference point for potential buyers who want to get a feel for the group's style. The impassioned vocals on top of the catchy beat and aggressive guitars provide a good listen. The chorus in "Get Well" is effective, and the tune on "Iodine" is brief but infectious. The piano-driven ballads, "The Grey" and "Only A Memory," contain a fair amount of emotion, but both lack staying power. The album ends crisply with "Pieces," a song which only improves as it progresses.

Like the music, Icon For Hire's lyrics are also a mixed bag. The band showcases some pretty decent songwriting throughout the album ("Get Well" says "And being lonely's only fun in a group/It sort of loses its charm when it's true"). However, in their attempts to be poignant, the band's lyrics tend to go over the top, like in "Iodine" ("Depression's like a big fur coat/It's made of dead things but it keeps me warm"). Although the group doesn't wear their faith on their sleeve in their messages, the lyrics encourage their listeners to confront their inner demons while often focusing specifically on self pity. "The Grey" does sport some spiritual references though, "I don't wanna look you in the eyes you might call me away/I don't wanna give you the chance to make me stay/ You tell me/In your deepest pain/In your weakest hour/In your darkest night/You are lovely."

Lyrics aside, Scripted is really for two kinds of people: fans of chick-rock fronted bands with a pop edge, or those who have never heard of Fireflight or Flyleaf and think they might enjoy what rock might sound like with female vocals at the helm. However, if you are the type who has serious peeves about artists who simply walk in the paths others have paved, then the well-produced, debut album will probably not impress you on any level. To recap, complete with puns: although Icon For Hire's first album is well-acted with slick, catchy refrains, they never deviate from the script to truly be a genuinely remarkable production.

If you take Fireflight, Flyleaf, and a Paramore and mash them all together, you would end up with Icon For Hire, Tooth and Nail's latest female fronted band. If you are wondering about the meaning of the band's somewhat out of the ordinary name, Ariel, the band's lead singer, explains it as, "We're basically making fun of how our culture makes idols out of musicians" While there are some fun songs on the album, like "Theater" and "Make a Move," Scripted seems to be just that scripted. Anyone who has listened to the aforementioned bands knows exactly where this album is going before it gets there and the originality is almost non-existent. Although it is painful to say, it seems that Tooth and Nail, as well as several other labels, may just be trying to cash in on the success of these other female fronted rock acts. Don't think I'm against lady singers, but I would like to hear something different than the same ol' rock sound these groups typically release. While there is nothing mind blowing to be found on the record, there is still some potential. I would already recommend Icon For Hire over Fireflight or label mate, The Letter Black. The tongue-in-cheek mentality of the band, from their name to the album cover, coupled with the genuine thought behind their new album's title, gives the mid-west trio a little credibility in my opinion. They have a ways to go to catch up with the likes of a group like Flyleaf, but I am pulling for these guys, and gal, to break the chains of conformity within the genre and grow. Hopefully album number two will be powerful and a little more unique. - Michael Weaver, 8/22/11