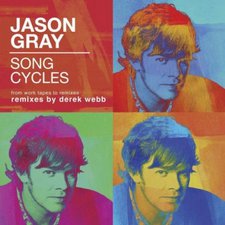 In a shifting, struggling music industry where songs become products that live and die by trends, navigating the tension between commercial success and artistic integrity seems like a lost art. But there are the rare artists that prove depth and crowd appeal don't have to be mutually exclusive, and one of those is Jason Gray, a Minnesotan songwriter who quietly built his grassroots career for a decade before surprise radio success brought his introspective folk-pop to a whole new audience. Great songs don't drop fully formed from the writer's page to the recording studio however; it takes a great deal of work that's rarely seen from the outside. Between his career-defining 2009 record Everything Sad is Coming Untrue and an upcoming fall release, Gray offers that rare glimpse into the birth and growth of songs in his new EP, Song Cycles.

Song Cycles features only four songs, but clocks in at 16 tracks, over an hour of music. Each song is showcased in four versions: work tape, demo, studio master, and remix. It's worth noting that a chunk of the track list is previously released material, but the format makes this an intriguing side project. His most familiar singles are represented, along with "Jesus, Use Me, I'm Yours," a deep cut from Everything Sad... Instead of an EP, it might be better to think of this as a four-part story of creativity at work.

First up are work tapes, musical sketches with mistakes, false starts, and co-writer banter left intact. Usually a rough recording with just an acoustic guitar, they're unfinished and raw, a rare peek at the inception of the songs they'd eventually become. "Jesus, Use Me, I'm Yours" shows the biggest evolution, starting with an original, eventually scrapped melody followed by Gray and Matt Hammitt (Sanctus Real) working out a complete transformation to the final version. Except for a discarded first verse, "I Am New" isn't too different, but it does feature an alternate duet ending with co-writer Joel Hanson (formerly of PFR). All the songs have lyrical changes and unfinished bits, and the work tapes, rough as they are, have a special charm all their own.

Demos are closer to finished, with extra synths and percussion in the mix. Once again, "Jesus, Use Me, I'm Yours" is a highlight, with a more acoustic guitar and beat-driven sound than the airy, synth-based studio version. The acoustic "Blessed Be" has a relaxed folk-pop feel with shuffling drums and synth backing, unlike the bigger, poppier studio take. The studio masters are the same tracks found on his Centricity albums, and show the transition to a fully produced sound when paired with their sparse early versions.

All of that is interesting on its own, though might not be enough to convince some listeners to buy songs they already have, but this EP's most exciting aspect is a collection of remixes by Derek Webb. If the word "remix" conjures up ideas of "More Like Falling in Love" as a twelve minute club anthem, know that in Webb's hands that's not the case. Instead, he strips the songs to their core and rebuilds them into unique pieces that feel completely fresh while keeping the spirit of the originals. "More Like Falling in Love" begins with a lone piano and builds layer upon layer into almost danceable electronic beats. "Blessed Be" is the most organic of the four, led by a quirky melody and filled in with bright strings, while "I Am New" is a crashing wave of electronic sound and fuzzed-out vocals that heightens the drama of one of Gray's strongest anthems. Yet again, "Jesus, Use Me, I'm Yours" shines brightest, beginning with a dark synth melody and Gray's voice multiplied and washed in gentle reverb. As it swells to a thundering climax, the song feels liberated, yet restrained somehow, not quite reaching the intensity of "I Am New," but not following the lilting, mellow path of the original either.

Song Cycles is an unusual project, one that risks appearing self-indulgent at best, an effort to squeeze more money out of existing material at worst. Considering Gray's and Webb's commitment to artistic excellence, both of those ideas could not be farther from the truth. Instead, it's a celebration of the art of songcraft, honoring the effort, love, and care poured into these songs. So to those asking if it's worthwhile to buy songs they already own, really, it depends. Newcomers who caught his singles on the radio or saw him on tour may find this a unique and affordable introduction to his best-known songs, but should still consider picking up his studio albums to get to know his work better. Longtime fans, especially those who find music-making intriguing, will find this a unique treasure, particularly for the subtle art in the work tapes and Derek Webb's creative reinventions.

If Jason Gray's catalog is the main feature, then consider this the commentary and deleted scenes rolled into sixteen tracks. Song Cycles unveils the labor of love that is song writing, and is enough to give a whole new appreciation for his next project's September release.