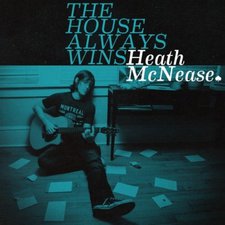 We know Heath McNease as the emcee from the fan club meetings and gun shows, where we've seen his incredible ability to flow with the best of them, keeping a good mixture of silliness and faith-inspired lyrics. In the midst of the hip hop shenanigans, there were always a few tracks where McNease changed it up quite a bit, and showed himself to be quite the accomplished singer/songwriter. In 2010, he not only released a new hip hop album, but an acoustic album that accompanied it called Shine On. Not a year later, McNease has crafted ten more songs in the vain of Shine On titled The House Always Wins.

McNease's sound doesn't differ too incredibly much between Shine On and The House Always Wins, but this newer offering is definitely able to stand on its own and, for the most part, avoid too many comparisons. There's still some of that Jason Mraz-influenced stuff, but McNease also has some songs that could be somewhat inspired by the likes of Jack Johnson or The Shins (it has more indie flair). He adds cool things to his songs that may seem silly on paper, but work very well for the respective songs. "Come Prepared" may be my favorite of these new songs, for numerous reasons. The guitar work is fairly simple, acting as the backbone of the song while the other aspects carry it along. There's something that sounds like whistling throughout the song that sounds delightful, the beat is comprised of some thick hand claps, the hook has some perfectly-executed synthy sounds, and the effect on McNease's voice sounds pretty good as well. Did I mention that the bridge is done in hip hop fashion? The music stays the same as the rest of the track, but instead of any sort of singing, he just flows a little bit. It's nothing intricate, but it's a nice little addition to the song.

"On and Down" is one of those "I don't think he's entirely serious" songs about his misfires with the ladies. "All the girls that turn me on, well they turn me down," he sings, reminding all us awkward guys about our own lives. Later in the album, "Blend" turns out to be more of a love song. Musically it's a gem, with a down-tempo, quasi-hip hop beat and some upbeat guitar and "whoa-oh-oh-oh-oh" throughout the verses. He says "It's not where I end or you begin, it's where we blend." Maybe he's not so unlucky after all.

McNease doesn't just stick to the guitar and some drums for The House Always Wins. He experiments with some piano on occasion too. "Your Enemy" is a bit of a haunting song that humbly asks God if there's room enough at His table for us. The piano acts as the rhythm-keeper, while the guitar takes center stage. You can also find hints of piano in the album closer, "Selah," but it's most prominent in "Waiting For Godot." It's inspired by a play of the same name and features a piano-led melody and what sounds like a theremin that, when combined with each other, makes me feel like I'm in the middle of a really creepy carnival. The play is based on two characters who keep waiting for a character named Godot to arrive. Neither of the characters really knows Godot, but they are waiting for him anyway, and in the end he never comes, thus they have waited in vain for absolutely nothing. Heath sings about the future finding them, but it "won't find us waiting for Godot." In addition, "Blend" features a beautifully-played harp in the midsection of the track. It adds a nice touch to the lovely feel of the song.

Despite the frequency with which artists are putting out new music these days, it's still a little unsettling to hear that one of your favorite artists is doing it. Needless to say that I was a little worried about this release, simply for the fact that it hasn't even been a year since McNease's two albums hit streets last year. But it was a complete underestimate on my part, and I guess the house won. If anyone at all thought that McNease's Shine On album was a fluke, they need to listen to The House Always Wins. They will be proved wrong. McNease proves himself to be not just a good hip hop artist, but also a good musician and songwriter. Whether it's irresistable pop hooks or toned-down, melancholy tunes, there's a lot to like about The House Always Wins. It's only available in digital format, and it's a pretty cheap buy, so there's very little reason to not get a copy.

If there's anything fans of Heath McNease don't have to worry about, it's time. Less than a year after his simultaneous release of two albums (The Gun Show and Shine On), totaling nearly 30 songs, he's back again with The House Always Wins. While a couple songs still have hip hop aspects thrown in vocally ("Too Much Love," and the stunning "Come Prepared"), the majority of the sound is reflective of the acoustic sound to be found on Shine On. Thankfully, this acoustic work is hardly limited to a guitar and light drums. One also finds a variety of claps, snaps, whistles, harmonica, and even some light synth. Songs like "Cause and Cure" and "Your Enemy" feature simple arrangements with echoing vocals and haunting melodies. The lyrics throughout are honest and thoughtful, covering topics from down-and-out relationships to musings about faith. While The House Always Wins has a low production feel, its quality is definitely high and worth many listens. - Sam Schaumberg, 2/20/11