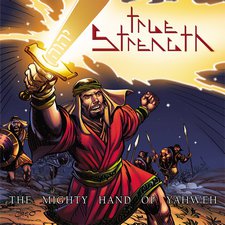 
Generally, when one thinks of '80s nostalgia in music, one thinks of the synths and bass that inhabited the era's pop music. Not everyone will think of someone like Roxx Records band True Strength, with gritty production, shredding solos, and high-pitched power vocals. Yes, this is the heavy metal of the '80s, though some aspects of modern power metal are apparent as well. But while The Mighty Hand of Yahweh carries some well-played musicianship, the songwriting often leaves much to be desired.

"Vision of the Commander" stumbles a bit out of the blocks. There's an attempt at a spoken-word intro track, which doesn't fit well with the guitar riffs and drum pattern. "Joshua," with its monotonous rhythm and frankly dull melody, fares little better. Based solely on these tracks, the album seems entirely doomed. But, fortunately, it doesn't stay this way. "Burning of Ai" is a solid metal track, and "Kings Put to the Sword" has a creative bass-led intro which leads into what may be the best track on the album. But the closer, "Rest from War," feels like the band took a track as intense as the rest of the album and shoehorned it into a ballad. Placing the strongest tracks at the middle is always a major album construction flaw; the fact that many of the songs follow the same verse-chorus-solo-verse-chorus structure doesn't help.

The Mighty Hand of Yahweh is a concept album based on the book of Joshua, and, in fact, many of the song lyrics are pulled straight from scripture. Sometimes this works well enough, but on some songs the words just don't fit into the music (such as in "Joshua" or "Waters of Merom") or unnecessarily repeat the same words (as in "Kings Put to the Sword"). In addition, one can't help but feel that a couple of tracks could have used some thinning down--"Sounding of the Shofar" and "Waters of Merom" in particular overstay their welcome--and a couple new tracks could have been added in (where is the death of Achan, or the deception of Gibeon?). But ultimately, the biblical concept is commendable, and the band deserves kudos for this feat.

All of which is to say that, as an album, The Mighty Hand of Yahweh is neither a masterpiece nor a trainwreck. At its best moments, the album is an enjoyable retro metal record; at its worst, it painfully drags. "Burning of Ai," "The Sun Stands Still," or "Kings Put to the Sword" all are fine, commendable metal songs, but many of the other tracks have little to recommend about them, and start to run together as the album continues. If you're really into '80s metal, check out a song or two and consider diving in.