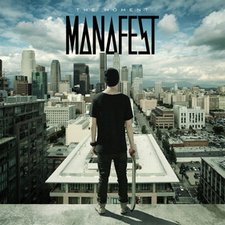 Manafest is quite an inspirational figure. He's dealt with many trying circumstances throughout his life, including the suicide of his father, as outlined in his book Fighter. His last album, sharing the same name as his book, was a slight step down in intensity from The Chase, but he still managed to keep things pretty energetic. His newest effort, The Moment, finds him at a different level of maturity and on a different plane musically. Manafest's previous works have been rock driven rap anthems, but this time around, the rock aspect has largely been dropped for a more pop influenced sound; the rap side of things has also been toned down a bit.

The title track opens the record up with a song that initially sounds something like Linkin Park's "Bleed it Out," but changes directions at the chorus. Unfortunately, "The Moment" doesn't have anywhere near the energy that "Fighter" had to open the previous release; this sets the album off on a rather slow start. As you're waiting for that ball of fire that is Manafest to explode, you get the acoustic fronted "Edge of My Life." The acoustic guitar in the verse gives way to a pop/dance feel in the chorus and the bewilderment really begins. The first really interesting song to be found is "Criminal." This is the first track to really feature Manafest rapping, and the chorus is rather catchy, but the Manafest fans have grown accustomed to still hasn't arrived. Another few songs go by before the next track to catch your attention pops out. Trevor McNevan's easily recognizable voice starts "Diamonds" off. Trevor powers the songs through the chorus and makes the track one of the best on the album. McNevan's inevitable guest spot leads to a string of enjoyable songs. "Paradise" and "Bull in a China Shop" are the most rocking songs on the album and sound closest to Manafest's past work. Both are nice additions and make this three-song stretch the brightest part of the album. "Startup Kid" has a bit of an old school rap feel and is a decent addition, but the closers "My Way" and "Thrill of it All" don't really separate themselves from the pack.

Manafest has made a clear decision to head in a different direction with The Moment. Musically, the edge is gone. Manafest seems content to focus more on grooves and pop sensibilities in the music more than the high energy he is known for. I wouldn't say that the record is inherently bad, but this new version of Manafest on display is a bit puzzling. Manafest is at his best in high energy moments when he lets it all hang out, but that moment never arrives on this album. What you get here are a few decent tracks mixed with several that really don't contest for your attention. While the messages are positive and uplifting as one would expect, the music just isn't on point. Perhaps Manafest is going for a wider fan base, or maybe he just wanted to challenge himself by doing something different, but the result doesn't really pay off. Hopefully when we see him next, Manafest will be living up to his full potential. In the meantime, maybe you should go back and revisit The Chase instead.