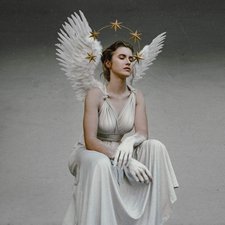 Fit for a King
The Path


Regardless of the events of the year, Texas-based metalcore outfit Fit for a King is taking a markedly more optimistic turn on The Path. Largely abandoning the desperate-but-hopeful lyricism found on 2018's Dark Skies, the album embraces instead the bold and triumphant declarations of Slave to Nothing, complementing the anthemic, metal-focused rock sound of the record. Shaking up the formula that has defined their past discography, The Path keeps up the band's consistent reputation while changing enough to avoid feeling stale.

More electronics and keyboards are present than usual, lending a cinematic atmosphere to go with the anthemic nature of the first half of the album. And for tracks 1-5, "anthemic" is almost an understatement; choruses positively soar, and breakdowns are led off by battlecry screams (and punctuated, interestingly enough, by the tolling of bells.) While some of the lyrics come off as a bit cheesy (such as "You tried to crush my soul, you failed / I conquered and prevailed / You'll never break me" from "Breaking the Mirror"), the chants of "Rebuild, redemption" from "Annihilation" and the cry "Prophet, what are your words for me? / Savior, am I too blind to see?" from "Prophet" work positively in the album's favor. In addition, the band has also gained a gem in the form of lead guitarist Dan Gailey (Phinehas, Becoming the Archetype), who lends some solid solos on "Louder Voice," "Breaking the Mirror," and the title track.

The back half of the album wanders a bit more stylistically. "God of Fire" starts off with an electronic drum beat and extra compression on the vocals, from Ryan Kirby and featured Crystal Lake vocalist Ryo Kinoshita, before jumping into the chorus. "Stockholm" stands out as one of the album's heaviest cuts before progressing into "Louder Voice," which contrasts electronic-influenced verses and bridge with a chorus that would have fit easily on one of their earlier releases. "Vendetta" rivals "Stockholm" for the heaviest track and closes out the album in a satisfying manner--although the theme of the song ("vendetta" is an Italian loanword meaning "vengeance") feels a little out of place, especially as the final track.

Dark Skies was the sound of a band perfecting music they were comfortable with. By departing somewhat from their former sound, The Path ushers in moments that just don't fit as well (e.g., parts of "God of Fire" or "Vendetta") and, consequently, misses on the cohesion that Dark Skies had. But overall, the band plays their music well, and the variety is a welcome addition. Even on their new path, Fit for a King shows they have the ability to travel it well.