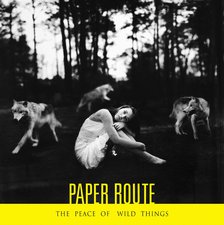 For fans of indie alt-rock in 2009, Paper Route was quite the treat. With elaborate melodies and meticulously stitched musicianship, the quartet's debut album on Universal Motown Records, Absence, was a deliciously received project from the start that only found more and more fans. Fast-forward three years to find the band one member fewer and without a home label, and things look pretty bleak for the talented group. But with these dreary conditions in the background, an album on the level of The Peace of Wild Things is just that much more unexpected and incredibly appealing.

At first, The Peace of Wild Things feels like an odd follow-up to an album constructed like Absence. Paper Route made their moves convincingly with the tightly wound instrumentation in tracks like "Carousel," "Last Time," and "Are We All Forgotten," and this was a true distinctive for the band in the alternative rock circle to have their musicianship so intricate and collected. With this in mind, The Peace of Wild Things feels quite a bit simpler in its approach, and those who encounter it with certain expectations could be slightly staggered by its straightforward nature. Thankfully, this new songwriting philosophy doesn't hurt Paper Route's excellence much (if at all), as evidenced by its ten fine tracks. Some of the most notable moments include "Glass Heart Hymn," which begins and ends with murky bass-induced synths that crescendos up and treads down in one fluid motion. "Tamed" is a short and sweet breathy ballad to usher in the epic "Rabbit Holes," which boasts 80's style keyboards and trademark soaring vocals courtesy of JT Daly. For any possible shortcomings in complexity, there are enough moments of inspiration that keep The Peace of Wild Things savory and succulent on the musical side.

At the end of the day, the songs have to be strong, and each one in this collection fulfills that criterion. "Love Letters" starts things out with brisk percussion to get the album's blood pumping from the get-go, but it also introduces another noticeable change from prior precedent: more lyrical transparency. The Peace of Wild Things makes no mistake in opening up JT Daly's heart that's full of a longing for love, starting with the willingness to change behavior on the very first track, "Love Letters" ("I'll do anything it takes to get through/I can carry you to any distance/no one's ever gonna love you like I do/this time I'm different"). In the same thematic vein, "Better Life" and "You And I" come the closest to the true accessibility of a radio single, but they realistically look at broken relationships, looking for a way to bridge the emotional gaps ("I've waited for this/I'm the letter you never sent/I'm just a shot at forgiveness/all the words now taken back/in every way I need you/pull me through every memory you thread"). When it comes to soul-baring, however, "Letting You Let Go" is the prime example of brokenness after a failed relationship produces the true emotive apex of the album, "Standing in the doorway/I don't wanna hear a sound/If you gotta go then I'd go now/You always wanted the best around/So you messed around/On the blessed ground we stood/Well it's now or never"). It all ends on a hopeful note, however, as "Calm My Soul" yearns for the pain to subside and Daly's spirit to be filled once again in a powerful ode to close the album ("God, calm my soul/I have walked behind for too long/now I will lead the way/I have strayed/strayed away").

Due to Paper Route's visible stylistic changes on The Peace of Wild Things, it's entirely possible that some older fans will have trouble buying into their new methods (if they haven't already), and though that's natural whenever changes like these are made, both old and new fans will do themselves a supreme service to investigate the album regardless. While clearly not the band they were three years ago, Paper Route carries a sound that's all their own, and this element hasn't changed in the slightest. It's still the case that no one else really sounds like them, and that, plus the sentiment and heartache lyrically evident, only adds to the enduring value of The Peace of Wild Things. If nothing else, Paper Route's still in the game of making truly unique, and heart-filled, music, and some of the year's best indie alt-rock at that.

Indie electronic pop band Paper Route has been making waves in the underground for years now, with the biggest of them being their Universal Motown release Absence in 2009. The quirky, creative, and wholly satisfying album paved new roads for the band to travel, but hardship was not far behind. A shattered heart was just one of the major catalysts for the themes inherent in the band's latest studio album, the independently released The Peace of Wild Things. At first listen, big changes are apparent, as the sound is noticeably more poppy and accessible than before. Given the lyrical nature of Wild Things, it serves as a perfect, albeit sometimes strange, packaging for songs about broken love. I say "strange" because songs like "Better Life" and "Letting You Let Go" are big, catchy pop songs with a lyrical weightyness not usually found in songs otherwise so upbeat. There's a strong sense of self-healing being sought after, and hopefully achieved, by vocalist JT Daly as songs like "Letting You Let Go" serve as anthems for moving on. Daly sings these songs with such emotion and passion that there's no question how personal they are to him.

As far as spiritual content, "Glass Heart Hymn" may be the apex, as Daly contemplates "My feet have led me straight into my grave / Oh Lord have you walked away from me?" just before a chorus of voices exclaim "Hallelu, hallelu, hallelujah / Let it rain, let it pour down on ya;" it's as if the song serves as the answer to his own question. The album closes (unless you purchase it on iTunes) with "Calm My Soul," a lovely ballad that prayerfully sings "...God / Calm my soul / Who bleeds more," seeking comfort from Someone who truly understands sorrow. Otherwise, the core of Wild Things focuses on love ("Sugar"), loss ("Two Hearts," "Better Life") and everything in between, with artistic lyrical musings and some of the more textured and thoughtful pop you may hear all year. Fans of their more obscure Absence will love songs like the electronic heavy "Rabbit Holes" and the uniqueness of "Glass Heart Hymn," but those hoping for an Absence II will be terribly disappointed. As is, however, The Peace of Wild Things is easily one of the best records of 2012. - John DiBiase, 10/18/12