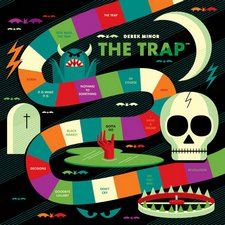 
Before Christopher Nolan signed on to helm 2013's The Dark Knight Rises, he candidly stated "how many good third movies in a franchise can people name?" The director's words struck an agonizing and real chord for creatives who construct their art in trilogies. Unfortunately, many "part 3"'s, whether in film or in music, either attempt to recapture the novelty of "part 1" or settle for "merely continuing" a story instead of being innovative, grand, and conclusive. Admittedly, RMG co-founder Derek Minor's Up and Away series consists of four components, yet his third installment, The Trap, while not the denouement, is perhaps his most definitive work to date. With vociferous production and incisive lyrics, The Trap sees Minor at his most vulnerable and honest as he critiques the unchecked systems of power and abuse that have disproportionately affected minorities, specifically African-Americans, and perhaps most tragically, the church's own failure to address these issues. Though he raps on the titular opening track "This record might be the end of me," he nonetheless remains rooted in his convictions and says, "This what the Lord been giving me / Someone to re-envision our history." Thus, Minor seeks to do more than just craft music based in the trenches of reality and critique solely out of anger, but keeps one eye to the sky, wishing and working for a better future.

But before Minor can dream about a better tomorrow, he must acknowledge the issues of today and the authenticity with which he describes the issues here is unapologetic yet judicious. Deep and pithy cuts like "It Is What It Is" and "God Bless The Trap" talk about how, in impoverished neighborhoods, for many the prospect of using education to find better opportunity for oneself seems implausible and difficult, largely in part due to the systematic racism and oppression. As a result, many communities "create their own economies with dope money as their salary", which further perpetuates stereotypes and promotes a destructive cycle of survival. "Robin" shows the consequences of such a culture and is a sobering look at how, in the trap, "there are no heroes" because many fathers have been given life sentences for petty crimes. This results in many young men having the responsibility of taking care of their families and how their choice to resort to violence, robbery, and drug selling to make an income stems both from a deep love they have for their families and a willingness to do whatever it takes to provide for them. Throughout all these experiences, Minor articulates how the trap is more than just a physical place but a mindset as well, and that those who "escape" either find themselves still resorting to habits despite being a "regular" member of society, or they simply forget about the neighborhoods from which they came. Yet, the emcee never tackles these issues head-on and is egalitarian in sharing his minutes with fellow featured artists. Thi'sl, Greg James, and Propaganda spit the most convicting bars on their respective tracks.

In addition to having a diverse consortium of guests, the album deviates sonically by not consisting solely of typical trap beats. "I Have a Dream" listens more like a spoken word piece and over heavy drums, where the emcee prophetically envisions a world where "The #MeToo Movement was not needed and all of our women like queens we were treated." Of course, Minor is also a veteran at weaving bangers and club hits in between his more socially conscious raps, and with labelmate Byron Juane, he celebrates his successes of making it "out of the bottom" while reminding listeners that "It's never been about the money for me / it's always been about the Kingdom, dummy." "Don't Cry" is an album highlight and with electric guitars, The Wright Way's chorales, and Aaron Cole's silky vocals, it transforms the album into pure lucid harmony. Likewise, while a less-seasoned emcee may have resorted to simply venting and complaining about issues, Minor employs a whole array of storytelling tools best exemplified on "Decisions," which, over a haunting instrumental, he raps about a boy who gets brutally shot and killed by a police officer, sadly stating how even the best intentions can still shape bad perceptions. While I enjoyed tracks like "See You Win" and "Revolution," their awkward placement at the end of "Don't Cry" was somewhat jarring and they would have benefited from being sandwiched in the earlier or middle sections of the tracklist.

Derek Minor has managed to put together a heavy and tightly woven project that is not for the faint of heart. His bars bristle with confidence and energy and yet, for all the poignant critiques, it is evident that he raps knowing that both the people who suffer in the trap and those who perpetuate such torment are meant to live and be better. He groans with apprehension yet fights for restoration and this is the beauty of The Trap. Unlike so many other projects that choose to simply remain in the valley of the shadow of death, Minor ultimately knows that he does not need to fear any evil. He knows his Lord as his shepherd will lead him and his community to green pastures and still waters, by any means.