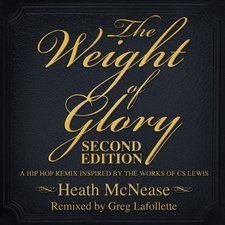 Heath McNease
The Weight of Glory: Second Edition (A Hip Hop Remix Inspired by the Works of CS Lewis)

In 2012, Heath McNease released one of the finest singer/songwriter albums of the year, if not even the finest, in his tribute to C.S. Lewis, The Weight of Glory. Interestingly enough, only six months earlier, he also released arguably the finest hip hop album of the year in Thrift Store Jesus. What does this mean? Well, the really short answer is that he possesses insane talent to create a lot of great music is short amounts of time. Already this year, he has also released a massive 77-minute mixtape. This time, McNease has mixed up some of his own work in a most delightful way, and that is a Hip Hop remix of his phenomenal aformentioned album Weight of Glory.

Now, in light of my highlights of McNease's massive skill set, I need to admit that this album, in terms of quality, does not measure up to the standards of his usual work. Why? Well, remix albums almost by definition are forced to add elements to the music that were never meant to be there in the first place, and usually thus come across as either awkward, pointless, or painfully forced. The original album was brilliant, and the reason it was brilliant is because McNease carefully and singlehandedly created each and every song from scratch to create little magnificent moments of gorgeous art just the way that he wanted to without any constraints whatsoever. But remixes need to, at least in some way, shape or form, stay true to the source material. Therefore, if an album was crafted to be an indie acoustic folk album, any sort of translation to something else (ie, hip hop) will lose much of the beauty of the original. With all due respect to McNease and this album, that is what has happened here. As such, many of these songs come across as seemingly lacking sincerity, either because they received too much of a facelift ("Mere Christianity," "Weight of Glory") or too little of one ("The World's Last Night," "Perelandra").

All that said, it is slightly unfair to compare any remix to its source material, particularly when the source material was as good as it was. After all, McNease is too talented and takes his craft too seriously to deliberately release a less-than-stellar project. In fact, as far as remix albums go, this is without a doubt one of the better ones. In fact, if one were unfamiliar with last year's masterpiece, they might not even be able to tell these are remixes. For the most part, the songs make a pretty natural transition to their new hip hop stylings, and some of these new versions ("The Great Divorce," "A Grief Observed," "The Four Loves") are just as strong as the originals. As straight-up hip hop tunes, they appeal most to those who best enjoy their beats in diet-sized portions. Of course, knowing that these are remixes of acoustic tunes, one of the most unnatural things McNease could have done is turn these songs into absolutely bangin' beats, and with the possible exception of "Mere Christianity" (which was already a tune with some hip-hop influence), thankfully he avoided that. The raps that he added to most of the songs flow well with the restructured music for the most part ("The Problem of Pain," "The Screwtape Letters"), but a couple, while being admittedly impeccably written, have a more unnatural feel ("Til We Have Faces," "Edmund"), as if they oughtn't be there.

So who is this album geared to? Well, the ones who will most appreciate this album will definitely be those who are already fans of McNease, specifically fans of the original Weight of Glory who are also hip hop fans. It fulfills that question burning in the back of such fans' heads of "What would a Heath McNease hip hop tribute to C.S. Lewis sound like?" And I can say without a doubt that this album fills that role well (though perhaps not as well as an album made from scratch as opposed to remixes). It is thoroughly enjoyable and strictly McNease, and like all his recent releases, he is presenting it on a pay-what-you-feel basis through Noisetrade alongside his two previous 2012 projects. And I can definitely recommend for all members of the Heath McNease Fan Club to give it a turn or two.