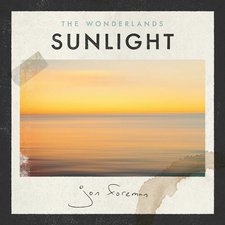 
Surely one of the most prolific songwriters of the current era is Jon Foreman. Even forsaking his ever-growing body of work with Switchfoot, he's made a large footprint with his solo material and his intermittent work with Fiction Family, so much so that almost everything new he releases is difficult to compare to something in his past. That's very much the case with Sunlight, which is the first of four new solo EPs from Foreman in a series called The Wonderlands.

With the four projects symbolizing the parts of the day (and with every track seemingly adding up to represent a 24-hour day), it's truly difficult for the seasonal EPs not to spring to mind. However, one listen to Sunlight's opener "Terminal" disrupts the comparisons. While the introspective "The Cure for Pain" was a brilliant and inconspicuous opener for the FallEP, "Terminal" clearly isn't attempting to replicate that approach. Instead, it lets the song's atmosphere build up to set the tone of the EP well, much like watching the sun set to create a beautiful picture. Stylistically, Sunlight feels much like a late afternoon summer soundtrack, though it might be difficult to notice it at first. There's a solid balance between the quieter acoustic numbers ("The Mountain," "Caroline," and "All of God's Children") and the more energetic tracks ("Terminal," "You Don't Know How Beautiful You Are," "Patron Saint of Rock and Roll"), making for an eclectic mix. This in turn makes the EP feel much more like a front-to-back experience instead of six unrelated songs in one place, much like Foreman's prior solo work.

In proper Jon Foreman fashion, all six songs here thrive on their thoughtful nature, and they're the kind of songs that maintain their value for the long-term. "Terminal" centralizes around the finiteness of life, while "The Mountain" recounts the ever-present struggle to stick to one's guns in the faith. The latter is particularly profound as Scripturally-inspired take on the battle for one's soul ("Oh the feeling comes to me again/the feeling the give up and to give in/the feeling that I've already lost the war/a pure heart is worth waiting for"). Another highlight is the lead single "Caroline," a heartfelt ode to a young woman's search for life's meaning. Perhaps the most biting track, however, is "Patron Saint of Rock and Roll," which uses its singalong style to thinly veil some strong critiques of some pockets of Christian culture ("There's a park downtown where the homeless get ignored/the church next door is a crowd singing 'blessed are the poor'/where the bumper sticker displays 'my copilot is the Lord'"). With tracks like these, Foreman draws from his experience effectively, clearly indicating that the seasoned songwriter still has much left to say.

What's curious is that the tracks of Sunlight don't tend to relate to each other terribly well, but the stylistic tone throughout the project keeps things held together. At the end of these six songs, it leaves the listener ready for the rest of the day to come. The next EP, Shadows, is due to land later in the summer, but for now, Sunlight is a refreshing piece of artistry that blends the familiar Foreman sound with some new flavors. While it might be harder to see songs on this EP becoming as memorable as previous tracks like "White as Snow," "The Cure for Pain," or "Your Love is Strong," but Sunlight is definitely the beginning of something very special, and The Wonderlands promises to be a fine series.

The Wonderlands: Sunlight is the first of four EP's Jon Foreman will release over the next five months. The overall quality of Sunlight is similar to Foreman's seasonal EP's, minus the high and low points. "Terminal" opens the album with a reminder of the inevitability of death, intending to discredit its hold on our hope and to spur us to be more loving towards others. It's a respectable tune but it isn't as gripping as you would expect with such weighty material. Taking a mellower approach, "The Mountain" ushers in a classic sound with a dusty string sample and elaborate acoustic guitar work. It has a pleasant melody, but it's somewhat recycled lyrics render it the least memorable track of the bunch. The anthemic "You Don't Know How Beautiful You Are" and the folksy "Caroline" progressively show improvement--especially on the lyrical front--but Foreman really hits his stride with "Patron Saint of Rock and Roll," which exposes common counterfeit gods and declares that nothing can satisfy our souls but Christ. The song's dynamic musical arrangement has a strong emotional impact as it is playful, reserved, and groovy at all the right moments, but what is most convincing about Foreman's delivery is the conviction and earnestness in his voice. The album quietly closes with "All of God's Children," another stand out track that dates back to the Vice Verses writing sessions. But even these two highlights aren't as remarkable as "Your Love Is Strong," "Instead of a Show," or the majority of the Fall EP before it. Even still, Sunlight is far from a disappointment--think of it more as an appetizer to another promising music series. - Review date: 5/24/15, Christopher Smith

From 2007 to 2008, Jon Foreman gave Switchfoot fans something completely unique and intimate with his very own solo project. 7 years later, he's back with his long hoped for The Wonderlands project and its first of four EPs: Sunlight. Those expecting a mirror image of previous releases will be both sorely disappointed and pleasantly surprised. Songs like "Terminal" and "You Don't Know How Beautiful You Are" have a sound that is reminiscent of Switchfoot b-sides without the more aggressive instrumentation. On the flipside, "The Mountain" and "Patron Saint of Rock & Roll" sound like something more along the lines of Fiction Family, as they feature organic sounds but with a pinch of eclectic synths and strings. However "Caroline" and "All of God's Children" are what many will find to be classic Foreman - acoustic guitar and growling raspy vocals. Without a doubt, these songs are all lyrically rich and musically diverse with a distinctive West Coast sound. If there is any uncertainty whether or not to purchase this album just remember these two simple words: JON. FOREMAN. If this is just the first chapter of The Wonderlands, this is going to be a joy-filled adventure. Enjoy the sunlight. - 5/24/15, Ryan Barbee of Jesusfreakhideout.com