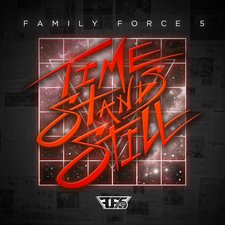 Family Force 5 is one of those bands where you never really know what to expect. They've released rock albums. They've released pop albums. They've even released a Christmas album. But one thing that's stayed constant throughout their career, is the ever present desire to not change for anyone. They've been maligned by the Christian industry for not being Christian enough. They've been rejected by the mainstream public for having too much faith. But the more you listen to them, the more you realize they're not trying to please anyone. They have a story to tell, and they're going to do it in the way they see fit. So what do you get when you combine a "new" lead singer with a debut on a record label known more for its traditional worship than its experimentation? You get Time Stands Still.

Honestly, it's an album that has to be heard to be understood. If you've followed the band's career, you'll recognize a lot of influences from their earlier work. Songs like "Jet Pack Kicks" and "Raised by Wolves" are very reminiscent of their major label debut, Business Up Front, Party in the Back. They're raw. They're brash. And most of all, they're the type of fun that just keeps getting better with each listen. There's even a song on the album inspired by the 1984 cult film, The Karate Kid. Most bands would throw in a track like that just for fun, but Family Force 5 isn't just any band; the track, "Sweep the Leg," is the album's opener. It's the perfect choice to start things off, and it sets the tone in the best way. From one listener to another, don't play Time Stands Still in a place you'd be embarrassed to be seen dancing. You've been warned.

But the greatest strength of Family Force 5 over the years has been their ability to surprise you, even when you expect it. That sounds funny, but it's true. Despite the fact that Time Stands Still is a return to form in many ways, it's also probably more melodic than anything the band has ever released. "Let It Be Love," Time Stands Still's lead single, is a perfect example of this. Not only is it lyrically one of the strongest tracks of the band's career, but it provides a sharp contrast to the harder sound that they're known for. The most surprising track on the album though, is "Walk on Water," which features Melodie Wagner of Hillsong Young & Free. Yes, Family Force 5 and Hillsong. It takes a while to get used to, but it works surprisingly well. When the band signed to a more traditional Christian record label, it was to be expected that their lyrical content would shift somewhat, but this collaboration came out of nowhere. Even though the pairing seems awkward at first, it provides a level of accessibility that perhaps wasn't there before.

Time Stands Still is an answer to some big questions. How much will Solomon Olds be missed on a full album? How much will the new label influence the music? How will Jacob Olds handle the transition from drums to lead vocals? In short, this is not a Newsboys/Furler-level change, but the changes are noticeable. That doesn't, however, mean they're disappointing.

If a group of random listeners familiar with FF5 heard "Walk on Water," they might have no who clue who the band is. If they heard "BZRK," they'd recognize Olds et al. right away. The former is a fairly conventional CCM song without much innovation. It might satisfy critics of the band's lack of spiritual content, and it's actually really well done, but it's just so ordinary. The latter is almost devoid of spiritual references, but it has a killer baseline and it's just so fun.

Parenthetically, this continues a bit of a conundrum that has followed FF5 throughout their career. There's an equation at work in their songs: spiritual depth is inversely proportional to cleverness and innovation. This album is no exception. The better songs are the party songs ("Raised by Wolves" and the so-nonsensical-it's-awesome "Jet Pack Kicks"), and they happen to be the ones focused exclusively on a good time. This is not to say there's no place for such songs - we desperately need them - but it would be nice if the equation could be flipped every once in a while.

This album is uneven but really good, and it demonstrates that FF5 should continue undaunted through the changes. For fans of the band and of Christian music in general, that's a sigh of relief. - Review date: 8/3/14, Mark D. Geil

Family Force 5 is back. While the exit of Solomon "Soul Glow Activatur" Olds is a big sound change (at least in attitude maybe), hearing Jacob "Crouton" Olds and his brother Josh ("Fatty") sharing lead vocals isn't as big a style shift as some may have expected, especially when the style of this album hearkens back to their first two albums. Time Stands Still quite literally sounds like two albums in one, with 15 tracks allowing for a fair mix between radio efforts ("Show Love," "Walk On Water," "Let It Be Love") and true FF5 party jams ("Sweep The Leg," "Glow In The Dark," "Raised By Wolves," "Jet Pack Kicks"). It's slightly schizophrenic, especially when a song like "Walk On Water" that features Melodie Wagner of Hillsong Young & Free sounds more like a dance-pop-worship track from Tomlin or Hillsong UNITED than FF5, but the variety and passion spread throughout Times Stand Still is tangible. If you've been missing what you originally loved so much about Family Force 5 in the beginning, Time Stands Still just might be what you've been waiting for. They do the CCM pop sound surprisingly well, and even better than some of the veterans in that arena, but it nevertheless feels out of place on a "Family Force 5" album. Still, for those put off by that style, the generous 15-track outing allows for your own personal playlist trimming, leaving plenty of material to fill up a normal album's-worth of new tunes (Let us not forget III was a mere 10 tracks). Times Stand Still is still a gem despite its own vastly broad spectrum of sounds and themes. (The Josh Olds-sung chorus of the deliciously rowdy "Raised By Wolves" may be the most infectious and fun song you'll hear all summer. Get ready to want to blast this album with your windows down.) - Preview Review: 7/3/14; Final Review: 7/31/14 John DiBiase of Jesusfreakhideout.com

So the "new" Family Force 5 is a bit odd. More so than usual, might I add. I mean, when the average Family Force 5 fan listens to the fiery dance rock tracks like "Sweep The Leg" and "Raised By Wolves," said fan will most assuredly feel right at home. But other tracks may leave those same fans scratching their heads. "Walk On Water" (which features Melodie Wagner of Hillsong Young & Free, who sounds like a poor Carly Rae Jepsen impersonator) is one of those tracks. If you couldn't tell from the guest vocalist, it's a quasi-worship song, just done in more of a Family Force 5 kind of way. It's also just a bad song, and definitely the weakest of the album (alongside the horribly-repetitive "Never Say Never"). I feel like this song (and the other worship tunes here...yes, there are more) were in response to their recent signing with Word Records, but regardless, they don't work for Family Force 5. There are also a few tracks where it feels like new lead singer, Jacob Olds (Crouton), has a difficult time coming out as the official frontman. "Sweep The Leg" and "BZRK," for instance, seem led by a rather timid Crouton who hasn't fully realized his new responsibility. He breaks out of that later, and actually does seem more comfortable in the less intense tracks, like "Show Love" and "Time Stands Still." Overall, Time Stands Still is a stronger offering than III (and even The Third), but as much as I dig some of the new material, I think this officially cements the fact that my days as a true Family Force 5 fan are done and gone. That being said, those fans looking for something more akin to Business Up Front, Party in the Back or Dance or Die should pick this one up and jam to "Glow in the Dark," "Raised By Wolves," "Jet Pack Kicks," and "Everybody Lose Your Mind." - 7/8/14, Scott Fryberger of Jesusfreakhideout.com

The departure of a lead singer usually means either the death of that band or a totally new direction. However, that's not the case at all for FF5 and their new album, Time Stands Still. This 15-track album is filled with a lot of what fans remembered from years past: crunk rock and dance tunes for loads of house parties. Throw in a handful of radio play (dare I say worshipful?) songs, most of which come out well, and this is a fairly complete album for the crafty crunk veterans. I doubt FF5 will ever reach the bar that they so highly set in the first years of their existence, but fans certainly won't want to miss this one. - 7/23/14, Kevin Hoskins of Jesusfreakhideout.com

In spite of the underwhelming reception of III, the change of lead singers, and their subsequent signing to Word Records, my worries of "Family Force 5: Generic Worship Edition" have been proven to be unfounded (mostly). Indeed, this might be the Family's most stylistically diverse album ever, not only with solid doses of their previous crunk-rock and dance-party styles ("Jet Pack Kicks" is awesomely corny and fun), but with some straight-up hip-hop, some alternative rock, and even some well-done worship (namely "Show Love" and "Glow In The Dark") mixed in. New lead singer (and former drummer) "Crouton" also puts in a very solid and versatile performance in his new role, with his one real setback being his sometimes awkwardly-forced raps. The thing that holds this album back from being a very solid 4 stars is the inclusion of "Walk On Water," "Let It Be Love," and "When Everything's Changing," which are all rather ordinary pop-worship tracks that I suspect (but have no real evidence in favor of) were included to satisfy label requests. - 8/6/14, Mark Rice of Jesusfreakhideout.com