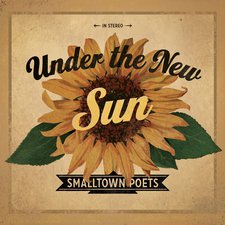 Smalltown Poets formed in Georgia in 1996 during the glory days of CCM. A year later they released their highly successful debut self-titled album on the then-thriving Forefront Records. While album sales weren't over the top for the band, they did manage to grab a Grammy nomination and a Dove Award for it, along with several successful singles. Seven years and three albums later found the band on what appeared to be permanent hiatus. Seemingly out of nowhere, the Poets were revived last year with their holiday album, Smalltown Poets Christmas. For fans of Smalltown Poets, it was exciting to see the band back, though a Christmas album wasn't what was necessarily hoped for. An enjoyable holiday record for fans led to an enjoyable experience for the band. Now we find ourselves with the Poets' newest release, Under the New Sun EP.

Under the New Sun opens with an instrumental; while not a bad listen, it fails to cash in on what Smalltown Poets have the potential of offering musically. After the instrumental, the band shifts to their most upbeat song on the album with "Turn Around." It doesn't quite hit the energy of a track like "Monkey's Paw" from their debut, but it is a solid enough pop rock tune. After a so-so start, the band hits pay dirt with "Charlie Brown's Lament," a track that may remind one of something like "I'll Give," also from their debut, musically speaking. This track takes top honors from this EP and should be enjoyed by music fans across contemporary and pop genres. "Grace is a Song" is a beautiful musical arrangement and nearly captures the listener on the level of "Charlie Brown's Lament." "Jesus, I Come" is next up and is one of two covers on the EP. The song is very simple musically, but its appeal should win listeners over as it easily outshines the album's final track in "I'll Fly Away," which falls a little flat of other versions and what is expected from Smalltown. "The Ballad of Time and Eternity" is another solid track and is also reminiscent of early Poets' records. While not the strongest effort on the record, it is still an enjoyable listen nonetheless.

On a short playing seven-track EP, Smalltown Poets turn out a product that is sadly hit-and-miss. While gems like "Charlie Brown's Lament" and "Grace is a Song" are sure to win listeners old and new over to the Georgia boys' charm, others like their rendition of "I'll Fly Away" may leave some wondering if they still have it. Under the New Sun certainly isn't the Poets' best work to date, but it still manages to top an album like Third Verse overall. For any long time fan of the band, this EP is a must-have. For any person looking to see what Smalltown Poets are all about, I might suggest a better starting place to be either their self-titled debut or Listen Closely. Under the New Sun does, however, give enough hope that if Michael Johnston and company continue to make music they will be on top of their game soon enough. That is something, I believe, that all fans of Christian pop/rock can be happy about.

The great philosopher once said that life is a marathon, not a sprint. For Michael Johnston, the road to the present has arguably been a little bit of both. In the spring of 1997, he and his fellow Poets shot out of nowhere with their self-titled effort - a wildly successful project boasting six Top 10 singles, sales of over 100,000 units and the distinction of being the best-selling group debut in the history of the Forefront label. A mere ten months later, they followed with the equally-impressive and also successful Listen Closely. Over the course of the next twelve years, though, things slowed considerably and the STP cooperative managed to eke out only three albums, one of them a holiday-themed outing and none of which were nearly as well-received as the first two releases. While ...New Sun doesn't feature the raw immediacy or a slew of sure-fire hits like the freshman and sophomore records, its underlying weight and beauty are just as imposing. After a brief orchestral introduction, the group starts things off with the slightly ethereal "Turn Around," which adorns the band's characteristic power pop inclinations with just the right amount of '60s sunshine pop. The irresistible melody, crisp instrumental section, soaring vocal work and air-tight harmonies of "Charlie Brown's Lament" render the similarly standout track equal to any cut on the inaugural effort - a complement that could scarcely be applied to the decided majority of the group's post-millennial output. And even though the subtle, piano-based structures of "Grace Is a Song" don't grab the listener as forcefully as early radio staples like "Everything I Hate" or "Anything Genuine," the track possesses an underlying splendor that becomes more and more apparent with each successive listen. The inclusion of not one but two covers of classic hymns ("Jesus I Come" and "I'll Fly Away") stalls the album's momentum a bit and is, at best, puzzling in light of Sun's all-too-short running time. And "The Ballad of Time and Eternity" pales slightly next to the superior abovementioned band-penned compositions. But even these drawbacks are merely relative within the context of what is easily the band's finest piece of work since the turn of the new millennium. If there is any justice in the world, Johnston will convince his cohorts to follow suit in short order with a likewise winning full-length affair. - Bert Gangl, 10/15/12