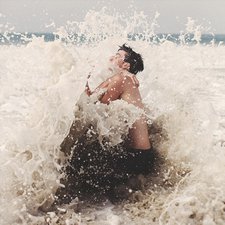 Early in 2012, Anberlin fans heard news that they could only infer to be good: Aaron Sprinkle is back. With the trio of merit that was Anberlin's first three records released on Tooth & Nail Records, their fanbase garnered newfound interest in Anberlin's next foray, and with that influence in the background, it makes an album such as Vital all the more exciting. Vital has been given life, and one of the most anticipated rock releases of 2012 is finally upon us.

Early on in Vital's production stages, Anberlin vowed to bring fans their most "aggressive" album yet. An assertive fan, however, could have been a little dubious of this strong, albeit daring, promise. Ever since the band's early days, Anberlin's alternative rock tendencies have been deeply rooted in energetic flow and soaring vocals, and any ballads aside, there's rarely been an exception to that rule in their tenure as a Tooth & Nail band. Signing with Universal Republic Records in 2007, however, resulted in a less edgy, but more modern, rock approach that met with mixed reception from fans. A return to the aggression would be welcomed with open arms, and thankfully, even down to the album's title, Vital delivers exactly on that promise. Anberlin wastes no time in fulfilling that promise with the very first track, "Self-Starter." Nathan Young's drumming has never sounded quicker and more gratifying, and the immensely powerful, almost string instrument-like, guitar riffs take the listener down the road of absolute enjoyment. "Little Tyrants," a true album highlight, follows in much the same footsteps, with a deftly executed solo from Joseph Milligan and scream-sung vocals from Stephen Christian covering the chorus with simultaneous authority and desperateness. This is the Anberlin fans fell in love with in the first place.

The action continues with the proverbially precipitous "Someone Anyone," expertly mixing guitars and synths the best that fans have heard from the band. Inspired by the recent events surrounding the Arab Spring, it's a question of action and inaction and the decisions and objectives behind both ("Someone, someone, tell me what we're fighting for/anyone, anyone can start a war/no one can walk away truly alive/forward we find yesterdays gone, and I hope that I'm wrong/if we don't learn from their past, we'll repeat their history"). The short-but-sweet "Intentions" and "Desires" bookend the serene "Innocent" in a similar fashion. "Intentions" and "Desires" both address the inner mindsets of influencing others, but "Desires" addresses a spiteful former lover ("a liar, a liar/that's what you made of me/a wire, a wire/that's what we're walking on/the knife that's resting in my back is proof enough for me/that you're a one-sided catastrophe"). Seemingly in answer to Dark Is the Way, Light Is A Place's weakest track, "To the Wolves," Anberlin turns the concept of a breakup on its head for an effective track devoid of clichés. All this aside, the energy just rarely lets up, and when it rarely does, it's only to the album's advantage.

As usual, Anberlin's spiritual lyrics are up for interpretation, but "Other Side" is about as spiritual as Anberlin's lyrics get here, seemingly yearns for God's presence through vertical communication ("I can finally forget a past you say you never knew/I reach my hands to the sky/love me why don't you know me/hold me and trust me"). But when it comes to soul-baring ballads, "Innocent" captures what fans have come to expect from Anberlin's sensitive songwriting style, focusing on the beauty of a young child's inexperience and naivety ("we are all born the innocent/we were born to run carefree/you will live on in the hearts of men constantly"). The electronic influence in the drums and keyboard, however, break new ground decisively, and "Innocent" is a Vital distinctive as a result. Similarly bridging the gap between intensity and serenity, "Modern Age" (another especially solid track with a composition unique to this release) is the penultimate track to usher in the epic closer, "God, Drugs & Sex," the story of a failed relationship and the reasons for its dissolution. With Christie DuPree (the youngest of the DuPree sisters of Eisley fame) contributing her angelic vocals to echo Christian's, it's another supreme album closer dripping with robust emotional power ("a grand blank look on your face/when you learned it was over/do you ever question why/what could have been different/we were so comfortable living in each other's skin/meanwhile I was dying from within/'cause God, drugs, and sex don't mean a thing/to you now do they now, baby").

Vital sums up Anberlin's career in a concise, but still absolutely complete, manner. The uncompromising power and musical tenacity of the band's past has finally caught up with the smooth, delicate, and modern edge New Surrender and Dark Is the Way both set as a musical and lyrical precedent, and Vital is the combination of the old and the new of Anberlin's musical philosophy in an unfiltered and genuine way. While New Surrender and Dark Is the Way all had their individual strengths, Vital is the album fans have waited for to restore the band's fullest grandeur from their Tooth & Nail days. It was made to be a crowd-pleaser, and the crowd in question is going to be enveloped.

Standing on its own merit, Vital is a particularly durable alternative rock release with eleven tracks of excellence. But in light of Anberlin's history and the unceasingly high expectations their fans have set for them, their sixth studio record is even more rewarding as the quintet's strongest effort this side of Cities. The most accomplished alternative rock album this fall, and possibly even the year, Vital forcefully satisfies to the very last drop.

- PReview date: 9/23/12, Review date: 10/14/12, written by Roger Gelwicks of Jesusfreakhideout.com class="coversize" align=right> Early Thoughts...
Anytime there's a new release from Anberlin on the horizon, it's a hotly anticipated one. Hitting #1 on our Highlighting 2012 list for the latter half of the year, this time marks the return of Aaron Sprinkle on producing duties, and his involvement raises the hype to an all-time high. Vital, seemingly in answer, is ready to take October by storm, bringing eleven solid tracks of thoughtfully constructed alternative rock to the table. Vital duly delivers on the promise for a more aggressive record; aside from the proven examples of relentless musical passion in "Self-Starter" and "Someone Anyone," brisk guitars on "Little Tyrants" and "Desires" and murky synth work in "Other Side," "Innocent," and "Type Three" give the record a darker, but immensely enthralling, atmosphere. With plenty of contrast throughout for apt balance, Vital goes from forceful to serene seamlessly on a dime, and the charmingly foreboding closer "God, Drugs, and Sex," featuring guest vocals from Christie DuPree, finishes off the album in trademark epic fashion. On the whole, the boys of Anberlin have brought a rich, layered, and tight texture to their musical landscape that's a true distinctive from their past material, and after five albums of varying degrees of excellence, this is a welcome change; Vital showcases the quintet's ability to break out of their norm but still stay faithful to the sound that their fans have embraced most. Looking to be an unforgettable chapter of the band's history, Vital could very well be Anberlin's greatest achievement this side of Cities... - PReview date: 9/23/12, written by Roger Gelwicks of Jesusfreakhideout.com -->

Since leaving Tooth & Nail almost five years ago, Anberlin has morphed their sound in more accessible ways to try to win over a broader crowd. Unfortunately, this hasn't exactly worked for them as well as they may have hoped, with the two albums following Cities viewed as a mixed bag of sorts to fans. Vital reunites the band with talented producer Aaron Sprinkle and forges the next chapter in the band's musical journey that feels like a worthy successor to their 2007 epic project Cities that the band never had. With lyrics that once again address relationships with hints at more deeper, spiritual themes, Vital is everything one can expect from an Anberlin album. At first listen, it sounds like a conglomeration of the past three albums with little new brought to the table, but further listens reveal deeper layers beneath the surface. "Innocent" and "Type Three" are some of the album's softer moments and actually serve as some of its best (I love the lyric of the latter, "I look to heaven to save me and you call me naïve / rather been a hopeless lover than cursed with disbelief"), while "Other Side," "Intentions" and "Desires" are among the best rockers. Vital is definitely amid Anberlin's best records yet and, in a time where a lot of today's modern rock music feels like it's the byproduct of a just-add-water mixture, this is a truly refreshing album. - John DiBiase, 10/14/12