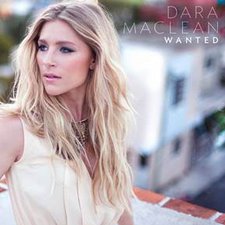 Two years ago, Dara Maclean got our attention thanks to her winning combination of soul and pop. Her sense of fun and ministry intertwined to make her freshman effort a rewarding listen, and her quality lead single "Suitcases" offered some much-needed life and lyrical polish ("You can't run when you're holding suitcases/It's a new day, throw away all your mistakes now") to radio consumers. Indeed, it was an excellent album to introduce her to the CCM scene, and a perfect springboard to leap into her next step, coming in the form of her sophomore album Wanted.

Unfortunately, I cannot say that she has stuck the landing. In Wanted, Dara has backed off from the jazziness and R&B influence that dotted her debut, instead offering a sound that is overall more contemporary in nature. For sure, her vocals are as soulful as ever, and it can't be said that her penmanship has suffered in the least. But, in regards to the musical direction she has taken, some listeners, like this reviewer, will have undoutedly been hoping for a continuation and maturation of her soulful sound instead of a regression into a more (if you excuse the word) "safe" sound which easily pleases the most basic musical hunger.

This is not to say that Wanted does not have its highlights. "Step Into The Light" offers a bouncy ukulele-driven melody and tender vocal stylings that recall some of her past work in a way that I had hoped would be more prevalent on this album. "Made" is another highlight as a worshipful piano ballad and one of the most soothing and gentile songs Dara has produced yet. "Nobody But You" features a return of the jazzier, R&B side of her that was heavily featured on her debut. The rest of the album, however, falls mostly flat. Some of the bigger problems concern the underutilization of Maclean's vocal power (particularly "Set My People Free," which could have been used as a vehicle to showcase it, but instead relied too much on percussion and low orchestral tones for the song's power), leaning too close to a generic radio formula (such as in the title track and "Our Only Hope"), and a few too many slower ballads clumped together on the latter half of the album to severely limit the amount of diversity Maclean could have offered here (and, indeed, did offer in her debut).

The album's lyrical content is all connected by a tight bond expressed by the simple title of Wanted, in that God loves us in spite of our human condition and anything we could have done in the past to disappoint him, to the point that it fits the definition of a "concept record" even better than many so-called "concept records" that have been released. As noble as this is, herein lies the problem; this theme has been done to death in Christian music through the years. And in an environment like this, it becomes nigh impossible, unless the artist is truly extraordinary, for an album solely centered on such themes to actually stand out among all the rest. It is far from a bad theme, of course, but the album could have benefited from some more diversity, topically speaking.

Overall, Wanted doesn't quite merit the sort of attention her debut earned. Dara Maclean possesses so much more potential than what is shown here. Hopefully this is merely a case of the sophomore slump and we can expect a rebound back into doing what she does best on her next effort.