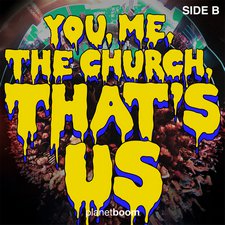 planetboom
You, Me, The Church, That's Us - Side B


I recently reviewed Side A of Planetboom's two-part installment titled You, Me, The Church, That's Us, eagerly awaiting Side B. With that now upon us, I have to say, I find the sides uncannily similar to each other. In fact, the progression from song to song follows almost the exact same formula as Side A, with the opening four tracks being completely rambunctious, and the four that follow being slow-moving worship ballads. The only negative with presenting it this way is it's a fairly predictable pattern and doesn't have the same ebbs-and-flows of a studio album. Side B opener "I Will Follow You" is perhaps more happy than the heavy hip-hop/rock of Side A's "The Core." This opening track reminded me of older Hillsong Young & Free, especially noting its simple "give your all up for God" type lyrics, "I lay my whole life down and I pick up my cross/cause I know that being with You is better, whatever the cost." As in Side A, the lyrics as a whole bring hard-hitting biblical truth in a simple, yet fresh, way. Take the following number, my personal favorite, "Word," which trades off between Jesus and Scripture as being the word of God, "It is written, God said/cover to cover/Your chapt?rs of love/it changed my life/And it's full of Your promises/it's full of the truth/just a word from the Holy Scripture changed my whole world." Again, there's nothing particularly groundbreaking about these lyrics, but it's that simplicity of the gospel that today's youth need, and that many other youth-centered groups seem to be missing.

Next up is the upbeat hip/hop of "I'm Free, I'm Fearless," which really banks on this live setting due to its call-and-response participation and the dance-break in the bridge. There is energy to spare here, as the lead vocalist shouts out the words while behind him there's a hundred and fifty different things happening; choreographed dancers, a funky live-drum set, multiple guitars and synths, and a plethora of background singers (though you can't hear them, a small bone I have to pick with the modern worship band, but that's for another time). It's a different animal than anything I've quite seen before, and being a purveyor of live-shows myself, it looks like a show I'd not want to miss. Rounding out these first four barnburners is the dark rap/rock "Resume Check" which, as the title suggests, goes through attributes and miracles of God extolling Him for all He's done. I did find the dance-break to be missing something, perhaps a sing-along portion to go along with it or something; it just seemed a little empty. However, the stringed synth escalating the bridge to a major chord structure really showcases the songwriting and musical talent of the creators of the songs.

Going into the final four tracks, we know the pace is going to slow down to a halt, a detraction from the flow of the album as I've noted above. That being said, the opening ballad, "I Am Found," is the best of the bunch, with a catchy piano lead, honest prayer-like lyrics, a powerful chorus with a strong melody, and a solid electric guitar lead in the bridge, "Your strength is made perfect in the presence of weakness/Your grace is sufficient irrespective of what I face/You turn it all around/in Your presence, I am found." Following that is really a two-part track, "Let My Life Give You Glory" which leads into an instrumental addendum titled "Selah Moment 2," which takes more of a cookie-cutter "youth conference" type approach, obviously allowing a moment of reflection with the audience. Again, it's hard to gauge how much the live setting would impact what Planetboom is trying to achieve here, but as a standalone track, especially including the instrumental that follows, it's just a bit too long without going anywhere too special. The last track follows suit with an eerily similar sound as the song before it, including the same female lead vocalist, slow tempo, and building bridge. Again, the lyrics are strong, but I would have liked to see more variety from song-to-song, even just a slightly more upbeat section in one of the ballads. As it stands, the album trails off in the second-half, and I lost interest towards the last few songs.

All in all, Planetboom has gone for something that should be applauded: biblically based lyrics that are relatable to today's teens, and a culmination of years of modern musical tricks that sees the synthesizer taking center stage, without sacrificing the organic sound of real instruments to supplement it. As a whole, the execution was solid, the sound quality top-notch, and hopefully the listeners were impacted to act on what they were shouting, to give their hearts fully to God.