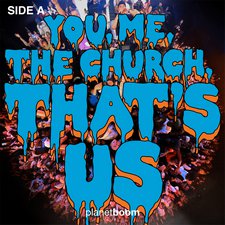 planetboom
You, Me, The Church, That's Us - Side A


Planetshakers are no stranger to releasing music in spurts. Now, this intermittent trend has made its way to the worship band's youth-centered derivative, planetboom. The first half of You, Me, The Church, That's Us was released as a Side A in January, with Side B set to release this April. In preparation for this next installment, let's revisit what Side A had to offer.

Planetshakers have always teetered on the edge of being too rowdy for some, even to the point of being viewed as "disingenuous" or "sacrilegious." Well, if you fall into that camp, don't even bother with planetboom. The first four tracks of Side A (visually as well as musically) resembles a teen dance party, mixed with hip-hop, a tinge of funk, and an eclectic array of instrumentation, all structured around the modern worship band.

While this may not be suitable for Sunday morning worship, the lyrical content is perhaps better than most modern worship groups. I was expecting the lyrical side of this to be a throwaway, but it ended up being the strongest aspect of the entire project. The overall theme is giving our whole heart to the Lord, as He is eminently worth it. In fact, if all of the bells and whistles detract from anything, it's the serious and deep messages presented. Take the opener "The Core," which proclaims, "I should be dead in my sin/But I'm living and free/cause Jesus died in my place/Jesus wiped my slate clean/now, I'm giving Him my best/cause He's given me His/He's the undisputed king/He's the best that there is." Other youth-centered worship bands would be wise to use such hard-hitting truths in their attempt to reach teenagers. The next track, "Jesus Got A Hold Of Me," has about ten different sections, ranging from R&B, to hip-hop, to movie-score orchestration, to an "out of left field" dance break, and by the time it was over, I was well out of breath. But this is not a detriment as it keeps you interested and shows compositional talent, without sacrificing sincerity. The title track and "I Believe" continue this opening sprint, swerving this way and that, but throughout all the ruckus, I was still most enthralled by the turns of phrase and deep biblical foundations, like this from the title track, "Belonging to Your family is the greatest thing in my life/so, every day of my life/I'ma tell my world how good it is to be a part of this/there's nothing else that could compare to this/I'm adopted by the Father/and what You join together, none can separate/You, me, the church, that's us." The next track, "Nothing On You" is a beautiful ballad that drills home the album's thesis statement by declaring, "Somebody told me that the best thing/I could live for is my dreams coming true/But nothing else will do compared to You/You're so much better than any other offer/More than dreams, more than needs/Jesus, all I live for."

The rest of Side A slows down to a halt, as the next three songs meld into one another in a "worship moment," which was clearly recorded live. I wasn't as big of a fan of this portion, because it seems to take away from the proprietary nature of the opening songs, and lost the flow of the album in favor of a drawn-out worship moment. In my opinion, this would have been better served as a separate release.

If reaching the youth of today using a specific style of music is to be done, I can't think of a better example than what planetboom is achieving with You, Me, The Church, That's Us - Side A. For me, a big hang-up with youth centered bands has been the sacrificing of lyrical depth in favor of watered-down, inoffensive tokens. Happily, nothing could be further from the truth here, and as long as the "show" doesn't distract from the wholehearted call-to-actions the band is prescribing, I'm all for it... and I'll be looking forward to Side B.