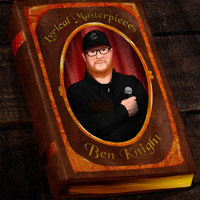 
Punk rocker turned nerdcore rapper Ben Knight impressed me with his I Don't Wanna Be a Gryffindor EP. Knight is already churning out his next collection of songs in an EP titled Lyrical Masterpieces. In Gryffindor, Knight explored nerd culture in the areas of Harry Potter, Nintendo, and others. With Masterpieces, he raps about Dr. Seuss, Back to the Future, Star Trek/Star Wars, Peter Pan, and the X-Men. "Shawty Likes My Seuss Collection" starts the EP off, but is actually one of the weakest tracks. Knight's flow isn't as strong in this one and, unfortunately, he doesn't take advantage of the opportunity to throw down some Seuss-esque rhymes. "My New DeLorean" starts with a line from the original film as Marty is a bit surprised and confused as Doc Brown unveils his DeLorean. While the song isn't directly about Back to the Future, Knight does drop tons of BTTF references throughout and it's a fun listen to fans of the franchise.

The top track on the album is a long fought battle in the nerd world: Star Wars vs. Star Trek. In the "battle rap" set-up of "To Boldly Go to a Galaxy Far Far Away," featured rapper Mega Ran takes the side of Star Wars while Knight takes the side of Star Trek. While each rapper spits "insults" about the opposite franchise, the song calls for fans of each series to come together. As a fan of both brands, it's really fun to hear the disses on each side -- plus Mega Ran is a great addition. "Never Ending in Neverland" tackles Peter Pan and never growing up. Knight presents a case of being "conned" by Peter by going to Neverland and staying young. Erik Stephen, Knight's brother in this story, has a great verse about his disgust of Peter. He raps lines such as, "He promised me eternal life, but he wasn't Christian," "It'd be great to go on a date with Tink, but I've been eight -- Yeah, eight -- for like 5,000 weeks, which means girls are gross; I hang with my lost bros," "I'm getting' irate that I never age; I thought he was cool, but now I see he's deranged," and when talking about escaping Neverland, finishes with, "Yo, come at me, bro; turn you into Peter Pancakes." The final track goes a little deeper into the world of comics with "Warren Worthington is No Angel." People not deeply familiar with the X-Men may not realize that Warren Worthington is a mutant known as Angel (later as Archangel). The song talks about Warren's struggle with being a mutant and his love for Jean Grey -- which draws the ire of both Cyclopes and Wolverine. The song is actually one of my favorites to listen to and Angel's story is an intriguing one. Ben goes a little deeper on this one, but it pays off.

While "Shawty Likes My Seuss Collection" falls a little flat, the rest of the EP surpasses Gryffindor. Nerdcore is a special genre and an acquired taste for some. It's nice to have a nerdcore rapper putting out fun and clean songs. Guys like MC Chris are talented, but their lyrics can be harsh. Fans of nerd culture in any way should give Ben Knight a listen. Lyrical Masterpieces, a joke title itself, offers up some fun tunes and goofy lyrics about topics many of us hold near and dear to our hearts. I honestly can't recommend Ben Knight enough. Take a listen to Lyrical Masterpieces and look at Knight's previous work as well. 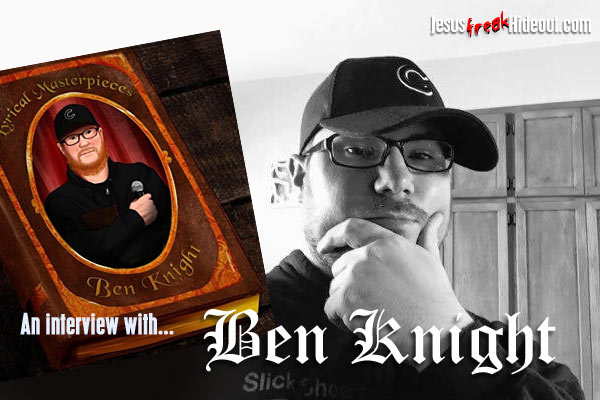 Ben Knight: Ive always been a fan of melody, in all genres of music. I grew up hearing my mom's music and it really formed who I am today. She would listen to John Mellencamp, Patsy Cline, Van Morrison, the Beatles and tons of other singer-songwriters. The common theme for all these artists was that they had an innate ability to write incredible hooks. I was never the kid who only liked one type of music or felt that one genre was below the others. Whether it was Rivers Cuomo belting out Buddy Holly, Boyz II Men harmonizing through Motownphilly or George Strait describing a hard headed bull rider, there always seemed to be a common goal. Write with a melody in mind.

As a teenager I fell in love with bands like The Ramones, The Clash, Operation Ivy and The Descendents. Later on Christian punk bands like 90 Pound Wuss, MxPx, Officer Negative and Dogwood would play the same role. These bands all seemed to have aggression, angst and a way of speaking to the confusion we felt about the world around us. I was like a moth to a flame devouring as much punk and pop punk I could get my hands on.

I played drums in a Christian gutter pop punk band called Broken for a while and then graduated to playing bass and singing in the pop punk band Ace High. I would wear merch from bands on Tooth and Nail and Drive Thru Records and subscribe to every zine and mail order I could (remember those kids). While I loved these bands there was always a part of my brain that loved hip hop.

In 2006, I discovered The Graduate by MC Lars and it really opened my eyes. Here was a guy who took the music, production and form seriously but wrote about silly topics. He did write about these topics but there was also an honest approach he took that caught me off guard. Since then I've really grown fond of the genre.

Ben: MC Lars and Mega Ran are two of my favorites. Every now and then I find other Nerdcore artists that have a song or two I enjoy. When it comes to Nerdcore and rap in general I'm pretty picky.

Ben: It does have a pretty big underground following. Some of the bigger artists perform at a large number of cons and festivals. Everything from video game and sci-fi conventions to the biggest Comic Cons. There is a con for just about every nerdy or geeky thing you can think of which is great! I wouldn't say a lot of artists are doing it but there are definitely more than you would think. The number of Christian Nerdcore artists is definitely in the minority.

As far as gaining major notoriety for the genre I really don't know. I think there is a certain lack of respect for Nerdcore but I think that's in a lot music. You don't usually find a lot of polka fans in the hip hop community but you also don't find a lot of country fans at Metallica shows either. Nerdcore done right takes just as much musical know how and lyric writing skill as any other genre, it just doesn't get the credit. I would love to see it grow in popularity. Especially in the Christian music community.

Ben: Mega Ran aka Raheem Jarbo is a really cool guy. I honestly just reached out to him, told him the concept and he agreed to do it. I really enjoyed working with him. I hope we can do more together. Erik is a really nice guy. I did a couple features for him and I thought his voice would work well for Never Ending In Neverland. It did and I'm really glad he took time to be a part of it.

Ben: Thanks. I appreciate that. I originally wanted to do a three part "Space Opera" about a Great War between the two groups. A fight that would start at the San Diego Comic Con and end after an intense battle brought them to a realization. They could each learn to appreciate the others sci-fi preference and still retain their own fandom. With this new approach it was Raheem and I poking fun at each other but concluding our verses with peace. While I took the side of Star Trek my personal loyalty would go to Star Wars. However, I still believe Wrath of Khan to be better than Phantom Menace.

Ben: What might surprise a lot of people is that Angel (Warren Worthington) is a founding member of the X-Men. Even though he's not as flashy as Wolverine, Cyclops or Storm he does have a compelling story. While I had never been a die hard fan of the character he was interesting to explore. Much like other comic book characters he struggles with the everyday battle between who he is as a mutant and who he used to be before that mutation.

One of his greatest struggles is unrequited love from Jean Grey. Which also gives Scott (Cyclops) and Logan (Wolverine) more reason to dislike Warren. I think the overall story of trying to find where you fit is fairy universal. That's what really interested me about his particular journey. Even though the song is about a fictional X-Men character there are still moral lessons to be taken from the lyrics.

Ben: I won't be performing any concerts for the rest of the year unless something specific comes up. However, I am planning a 2-3 week tour next year and some other things. For anyone interested they can just follow my social media. Twitter: @benknighthiphop Facebook: www.facebook.com/benknighthiphop

Ben: Well I don't have a particular Springer-esque final thought but I do want to encourage people to get out there and give Nerdcore a try. With my music in particular I am trying to cultivate a different kind of audience. So far it seems to be working. I've heard from moms who love listening to my stuff in the car with their kids as well as hardcore rap fans. That's another thing I love about this genre. There are no concrete parameters when it comes to the form or the audience. I fee like music is heading for another change. Perhaps Nerdcore could be a part of that new wave.