An up-and-coming rapper from Muncie, Indiana, Luke Knodel has finally dropped his first full-length album after a few years of releasing singles. Inspired by his own faith journey (and the rappers that got him interested in the genre in the first place), Knodel is aiming to let us know that Progress Isn't A Straight Line.

If there's one word that could encompass the entirety of the lyrics here, that word would be "relatable." To really hammer home the concept of the album (see the album title), Knodel wrote his raps with the utmost honesty and transparency, not shying away from his struggles and downfalls in his faith that are common amongst Christ-followers. "Drifter" is an excellent example, as he opens the first verse saying, "I've been drifting lately, faith's been getting lazy / wish I would pray, open His word on the daily / but I keep turning away, Lord I need Your grace / I don't need my works, I know You made me from the dirt / I need to see change before I return." Tracks like "Back Road" and "Repentance" follow suit, highlighting the difficulty of following the Lord's commands and choosing our flesh instead. But Knodel doesn't leave it at that, instead he opts to focus more on God's goodness, salvation, and the hope He offers. He outright worships God in "Hope's Side" and "Won't Let Go," and he sums up the whole album - from his life story to his thankfulness for God keeping him through the years - in the title track, which closes the album out. The song's chorus says, "Walking the straight and narrow path / trust in His grace, my faith gon' last / I just wanna see Your face / help me to complete the race," and the album closes by quoting the beginning of Hebrews 12: "Let us also lay aside every weight and sin which clings so closely, and let us run with endurance the race that is set before us, looking to Jesus."

Along with the relatable and faith-filled lyrics, Knodel's music benefits from being easily accessible. While bits and pieces remind me of some of my favorite independent rappers like Psalm and Paradox, Progress Isn't A Straight Line is much more radio-friendly. After all, one of Knodel's biggest influences is Lecrae, who he mentions several times on this album. Some mild NF influence is also pretty noticeable from time to time, and I'm also reminded of artists like PEABOD ("Stay With Me") and the king of Christian pop/rap, TobyMac ("Back Road," "Repentance"). Regardless of who all has an influence on Knodel's music and flow, there's no shortage of diversity. There's plenty of enjoyable hooks, melodies, and solid beats and production (with the trap sound of "Going Straight" being the only real miss for me). It's quite enjoyable the whole way through.

One could certainly run through the album with a fine-tooth comb and find things to dislike. Truth be told, it's not a perfect album. Knodel's flow doesn't always sound entirely natural, and some of the melodies are unappealing. But, after repeat listens, any negatives to be found seem to be due to simply being a newer, more inexperienced artist. With all the talent to be found here, though, I feel pretty confident that these things will be worked out with each new release. With a heart for Jesus and an accessible sound, Luke Knodel could be on the doorstep of being a household name for the broader Christian music audience. 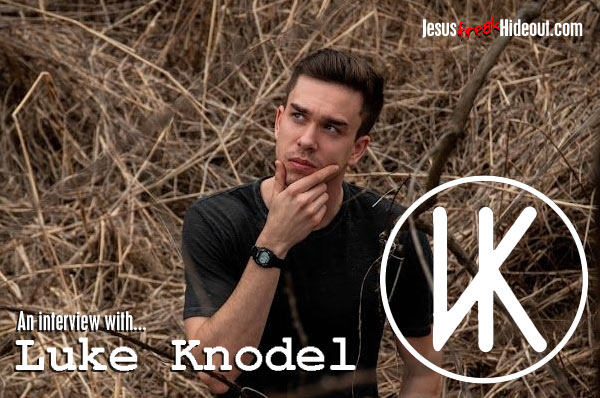 Luke Knodel: At age 10, I heard rap music for the first time when my dad played Lecrae's Rehab CD. I distinctly remember watching his "Just Like You" video and being interested in the art form. The first song I ever memorized was "Don't Waste Your Life" off of the album Rebel. From there I was strictly a Lecrae fan all the way through his release of Anomaly. In middle school, I started writing unstructured rhyming poetry that I called "rap" and would share with friends on occasion. In high school, I started trying to write over beats and figured out song structure, temp, etc. from a YouTuber named Cole Mize. In 2018, my friend Josh sent me a beat to rap over after I sent him some snippets of me covering a rap song. I would write my first structured song over that beat and released it that summer. Around that time I connected with Tyler Eads, a producer through my church and we recorded in the church offices! We've been working together ever since. I recorded this whole album at his home studio in Indianapolis. He's an amazing dude to work with.

Luke: Thanks! Early on in my music career, I was introduced to a few production companies that sell large, high-quality beat packages for cheap. I have not gotten into beat-making simply because there are people out there who are really talented at making beats and willing to work with me on songs. I'll buy track-out versions of the beats and Tyler will add his special spin on them by adding melodies or extra instruments, he's a wizard.

Luke: The phrase is inspired by the sanctification process in my life. When you come to saving faith in Christ, Justification is a straight line because you have received the righteousness of Christ. However, on earth, sanctification is not a straight line, you will have your ups and downs spiritually. Throughout the whole project, I go on a journey of processing the highs and lows I've experienced in my life.

Luke: If I could go on tour with NXT Move, indie tribe, or Peabod that would be incredible.

Luke: If a favorable opportunity presents itself I would consider signing with a label but I do know that a lot of artists are doing things independently these days with success. I am still pretty new to music and performing so I am looking to start doing more shows this summer and connecting with more people in the industry.

Luke: I would pick "Drifter" because it addresses spiritual backsliding and ends with God calling me back to himself and reaffirming that he still loves me despite my mistakes.

Luke: I hope that people will take away from my music that Christians are not perfect and should not pretend to have it all together. But I ultimately want to show that God is compassionate and gracious, slow to anger, and abounding in love. He wants everyone to come to repentance through his son Jesus Christ.