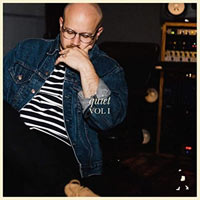 
Swingin Hammers, aka Ben Rupe, is back with a new EP following his 2017 self-titled release. The singer/songwriter continues his musical approach of a blend of country, folk, and Americana -- roots music. Quiet Vol. 1 is fronted by acoustic guitar, but steel guitar and a few other instruments highlight the mix nicely. The EP has a largely somber and melancholy feel musically. The lyrics also dip into the political arena, but do so without coming off as harsh or offensive. Rupe simply declares Jesus over politics.

"God of the Bible Belt" starts off less political as Rupe criticizes improper thinking often perceived or pushed from the "bible belt." The lyrics here focus on a "god" invented by man. It's a religious thing and not a God and Jesus thing. "The god of the bible belt sounds a lot like you. On every single issue he wouldn't dare disagree," "The god of the bible belt doesn't care if you're holy. He's grateful for time on a Sunday morning," and "The god of the bible belt says you don't need a savior. Let's just fix your behavior; you'll be alright," are some of the most telling commentaries provided in the song. However, the bridge of the song has Rupe singing about the true Savior that he needs. It's a track that hits pretty hard at religion vs. relationship. "The Truth," however, starts more into the political arena. Rupe sings, "If I say your child deserves to live; you'll say I'm just a Christian. If I say the refugees just need some help; you'll say I'm not right. But the house is burning down and there's only way to quench it: Love your neighbor as yourself." With abortion often seen as a Christian or rightwing talking point, and helping immigrants and refugees seen a leftwing viewpoint, Rupe splits the middle and says both are loving your neighbor as God commanded. Though he knows people won't accept those explanations without hurling accusations, the lyrics beautifully represent Christ's love that he commanded we show to others.

The lyrics get a little deeper into the political with "Nod Your Head." In this song, Rupe addresses the saying "American first" -- popularized by President Donald Trump during his 2016 election campaign. Rupe talks about Christians falling into this ideology while forgetting the great commission to reach the entire world. Rupe sings poetically, "Share the good news from east to west. We are on a mission; not to be the best, but to show the love of God to a world of unrest. When you hear America first, don't nod your head. It's simply not the mission; this world is not the end. Kindly you can listen and kindly disagree. And tell them of the Kingdom that's much more than you and me." They lyrics cut right through the political and get to the heart of Jesus and reaching others for Him. Finally, "A Broken Heart" is another song for the Christian that is mostly on doing the things we should do, but also touches on the political side of things just a touch in bridge. Mostly though, Rupe sings about how we should be living and how "bad things" are better than "good things" when those things are done in vain. Rupe sings, "A broken heart is much better than a joyful heart that should be broke. Don't mind if I disturb your slumber; it's high time that you awoke."

This little four-song EP carries a heavy weight. In the end, Rupe is pleading for Christians to put religion and politics aside and focus on Jesus and reaching others in need of a Savior. The lyrics and music are so simplistic, but the power carried behind them is enormous. While I'm typically not a fan of political lyrics -- and will admit that I had my own toes stepped on a touch -- this is a MUCH-needed EP in today's world. If we could all just focus on the Savior and reaching the world for Him as commanded, we would all be in a much better place. The somber tone of the music beautifully matches the heartbreak heard in the lyrics. I'd highly recommend giving Quiet Vol. 1 a listen. I'm already eagerly awaiting a Vol. 2.

It was three years ago that we were introduced to the debut of Swingin Hammers. The self-titled debut was a terrific acoustic and folk album that left me wanting more. Now I'm getting what I asked for, and I couldn't be happier. Quiet, Vol. 1 lives up to its namesake, with songs that are quieter and simpler than what's on the debut, featuring not much more than vocalist Benjamin Rupe and his acoustic guitar. However, what the album lacks in musical layers it makes up for in hard-hitting and convicting lyrics. I'm particularly drawn to the second half of the EP: "God of the Bible Belt" and "Nod Your Head." Rupe summons his inner Steve Taylor in "God of the Bible Belt," as he wonderfully satirizes American Christian culture. On the one hand, it's great to hear him calling out the culture's hypocrisy, but on the other hand, it will honestly make true believers want to get down on their knees and pray for them. "Nod Your Head" goes even further on the offense against American Christianity, but instead of satire, Rupe shoots straight this time. I especially love the final few lines of the song: "When you hear 'America first,' don't nod your head / it's simply not the mission, this world is not the end / kindly you can listen, and kindly disagree / and tell them of the Kingdom that's much more than you and me ." Quiet, Vol. 1 is a very pleasing EP that definitely leaves me wanting more. Between the subject matter and the terrific, albeit minimal amount of music, I'm hooked. I expect to revisit this quite a bit while I wait for new music to arrive. - Review date: 4/10/20, written by Scott Fryberger of Jesusfreakhideout.com