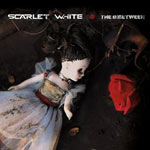 Scarlet White is a hard rock band whose name is based on the scripture found in Isaiah 1:18 (Though your sins are as scarlet, they will be as white as snow... - NASB). The Inbetween is the group's second full-length album and this time around, they enlisted the help of composer Richie English (The Goo Goo Dolls and The Reign of Kindo). Stylistically, Scarlet White probably fits in best with post-grunge artists, but not of the normal variety. They have a much heavier musical influence than most of their peers. Their sound truly reminds me of some late 90s and early 00s artists I used to listen to. Whether it is the short-lived Pressure 4-5, or the more established, Flaw, the music and vocals take me back to my high school days. That's not to say the music feels old and dated; it simply just reminds of a better time in music. That's a good thing. "Draggin Them Down" is a great start coming off of the short and dissonant opener. The chunky riff will get you moving and it eventually leads to some screams. From there, the album doesn't slow down too much until the first ballad, "A Letter." The music picks back up with two more hard rockers in "Fire" and "Bury Me," but the two have intros that sound alarmingly similar. While most of the album is hard rocking, it ends on a slow note. Nothing from "I Am Yours" (track 10) to the end touches the energy and heaviness of the preceding tracks. These songs are nice additions, but it's still unfortunate that the softer songs piled up on the backend. In the end, tracks like "Draggin Them Down," "By Your Throne," "A Letter," and "Bury Me" make getting this album a no-brainer. Scarlet White has tapped into something that has been missing from rock music for some time. They don't seem to worry about the type of "rock music" that is popular on the radio, but instead play their own mix of heavy post-grunge rock. Perhaps this is the reason they are charting so well on the Billboard Christian rock chart right now; they really don't sound like anyone else in the top 10. Excellent vocals, meaningful lyrics, and solid instrumentation make The Inbetween an album that could land Scarlet White in the spotlight very soon. - Review date: 10/9/14, written by Michael Weaver of Jesusfreakhideout.com

Michigan-based rock band Scarlet White have seen a small amount of success after their self-titled debut album, including some recognition from HM Magazine, and are ready to follow it up with The Inbetween. From start to finish, The Inbetween is a solid rock album that follows in the footsteps of bands like Skillet and older Falling Up, while breaking out into some hardcore from time to time as well. Unfortunately, the Skillet and Falling Up influence is such that hardly a moment goes by where I'm not reminded of either one of them; the song structures, vocal melodies, and guitar riffs of most of these songs bring to mind countless songs from these artists, just without the synths and cryptic lyrics. When the hardcore music comes in, it's pretty good, but only lasts long enough for you to realize that it's happening, and then it's gone. Other than the music itself, I do appreciate the openness of the songs' themes and lyrics. "Wake of the King" says, "I move when You move, every time I hear You speak, it brings me to my knees," indicating real closeness with, and devotion to, God. Earlier in the tracklist, "Draggin' Them Down" seems to be a calling-out to false Christianity, "Brother to brother, you let the fallen drown, while they reach for hope, you let them go, they see no Savior now...you don't care what's going on (draggin' them down)." Scarlet White is bold in their message, and their style of music will appeal to many rock fans. The production isn't golden, but it's very good for an independent act, and isn't too far off from some of the heavy hitters in the scene today. These guys could have bigger things in store for them soon. I would like to hear something a little more original in future releases; even if the genre stays the same, there's something to be done to not have almost every song sound like a literal copy of another band. But all that aside, the Scarlet White boys are on their way up. - Review date: 10/2/14, Scott Fryberger of Jesusfreakhideout.com 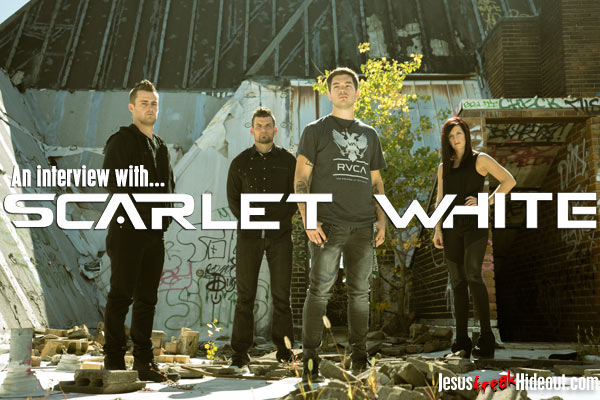 Jacob Hendricks: Our biggest musical influences would have to be Skillet, Red, Breaking Benjamin, Chevelle, and Creed. We're really into the heavy guitars, soaring vocals, and dynamics of these bands. We love heavy riffs and at the same time epic melodies and ballads. You will find both of these on the new album.

Jacob: God did bless Spencer with a powerful and unique voice. Sometimes just adding a little reverb and slight delay to a voice can give it a certain mood as well.

Jacob: We're glad you like it! "Draggin' Them Down" talks about how the corruption in society ultimately will bring us down. More specifically, about how corrupt leaders can lead people down the wrong path whether they realize their actions are harmful or not.

Jacob: First of all, Richie is a genius. Not just musically. Richie was the composer for The Inbetween, which means all the orchestrations (strings) were scored by him. He also played all the piano parts on the album and sings some background vocals. We worked alongside him for most of the project, but we never got to hear what was in his head until the album was finished. We think he hit the nail right on the head. His movie style scoring of the album really put a unique twist on our songs. Very theatrical. It also inspired the format for the liner notes in the album. It is written like an old style playbill. With each song being a different scene. It's very cool; you should definitely pick up a physical copy to see all this inside work.

Jacob: The doll/rose idea definitely symbolizes "The Inbetween." We decided the theme of the album early on in the writing process. There is a constant and very real battle between good and evil in this world. And everyone is stuck in the in-between. The doll represents the sadness and hopelessness one might face during life while the rose symbolizes hope. And somewhere between them is the in-between. See what I did there?...

Jacob: It is absolutely unbelievable that we have seen our names next to the industry big dogs! Top 10 with our last two singles off this new album has truly been a huge blessing. Being categorized with some of our musical heroes is a very surreal feeling.

Jacob: Right now, we are willing to travel anywhere and everywhere in North America, haha! We are working on booking our own stuff, but we also have a few other tours we're looking at jumping on with other bands.

Jacob: He's been seriously working on improving our faith and patience. No doubt. Lots of obstacles have been thrown at us during the making of this album and the releasing of it. We're taking the resistance as a good sign though. Life isn't easy. And nothing gets handed to you. We're hoping that the rewards will be that much sweeter since we have dug so deep and worked so hard for this album.

Jacob: Marvel or DC, eh? It might come as a disappointment, but I don't think any of us are that into comics. That's not to say we don't enjoy watching Batman kick some bad guy butt every once in awhile. If we were into comics, I think The Walking Dead would be a pretty sweet one to get into.