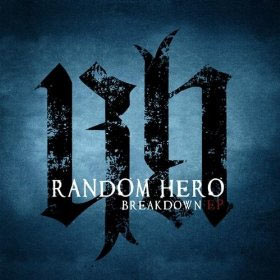 Last year, independent music was treated to a small offering by rock band Random Hero. The EP was called Breakdown and featured three songs, all of which were produced and co-written by former Skillet guitarist Ben Kasica. Knowing Kasica was involved becomes all too apparent when you listen to Breakdown, as each song sounds like it could've been a Skillet b-side (but maybe with a different vocalist, although John Cooper definitely has some sort of influence on the vocals). There's also a little bit of Nickelback influence in the music (not really the lyrics at all, thankfully), and "Freak Show" brings to mind Three Days Grace. The strongest point of "Freak Show" (and the rest of the EP) is the driving force of the guitars. There's no doubt that these guys know how to rock, and I can imagine that their live show is probably very energetic. "Honey" is definitely the weakest of the three tracks, sounding like something from Hinder (and not straying too far from their formula). The lyrics focus on the emotional conflict that ensues when we can't decide whether something we really want is actually good or bad for us. The chorus, while a smidge on the confusing side, captures this relatively well. "Breakdown" is quite possibly the high point of the EP. I like the chugging guitars in the chorus, and the early 12 Stones feel that the chorus brings. If you're interested in checking out Random Hero's EP, this is the song to start with, as it best represents what the band does well, and it ends the EP on the strongest note possible given the three songs here. Despite sounding very similar to a menagerie of modern rock bands (which is hard not to do when playing this style of rock), Random Hero is a good recommendation for those who follow any of the bands listed in this review. It was a good move to incorporate Kasica into the production, as he's very familiar with the style and was able to help Random Hero achieve the sound they were going for, and with very clean production on top of it. I honestly wouldn't be surprised to see these guys sign with a major label like Essential or BEC. Keep an eye out for them, and in the meantime, check out Breakdown. - Review date: 7/17/12, written by Scott Fryberger of Jesusfreakhideout.com 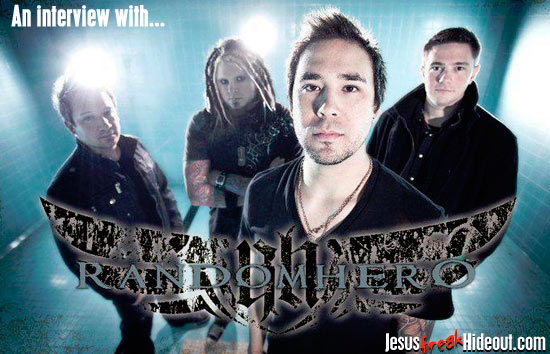 Aaron Watkins: The meaning behind the name Random Hero, to us, was a perfect fit, as everyone at some point in their life dreams of wanting to be a hero; you just have to be up to the challenge when the time comes. And we are just four random guys that love Jesus. We all answered His call to bring a message of hope in our music. That's our way of being a hero, but we all know who the real hero is: Jesus. That's the meaning behind it.

Aaron: Bertrand and I have been playing with Random Hero together for six years. But as life moves on, God has called some of our original line up to other things, so we've had some line up changes and we've recently got some new brothers with Los on bass and Jon on the drums.

Aaron: We play a lot of shows, and for the 2013 year, we are planning to get in at least 200 shows. It's our passion and what God has called us to, so we'll be working hard.

Aaron: Aside from the usual stretching and vocal warm ups Bertrand and I do, all clichés aside, we like to pray, and pray for not only a good show but for God to move, even if it's in one person's heart. We also like to slam energy drinks... Haha.

Aaron: We love so many bands, but our top 3 right now would be with Skillet, Love and Death and Red. Those bands rock so hard and have such great hearts for Jesus.

Aaron: "Honey" is actually not about a girl; it's funny we get that a lot. It's actually about a "love affair" could be with substance abuse, an individual, depression or anger and how we often hold on to those things that we know have negative effects on our lives and finally taking the steps to letting them go as it's for the best.

Aaron: Yes and no... You know, we would love to, but honestly, if we find a great label, major or not, that will be a good home for us and understands the heart of our ministry -- that's what we want.

Aaron: That's a funny story; we played with Skillet here in Denver, and Ben approached us asking if we were signed and if we had a CD that he could have. So we gave him some records, not really thinking anything of it. The next night, I checked our MySpace page--yup I said Myspace--and saw a message from him at like 2:30 in the morning. I actually had to re-read it several times cause I thought I was dreaming! So I called everyone waking them all up to tell them. Then we started talking with him and the rest is history! He's a great producer. He really understands the music process and how to push us to write better. And he helps us find that perfect and fresh sound. We love Ben and have been blessed to work with him.

Aaron: Yes, we are currently working on a full-length! We're finishing up vocals and it should be ready for release in the coming months. We're very excited about it. We have been able to play around with new ideas, and so far what we've got is by far some of the best we've written to date.

Aaron: God has been teaching us so much lately, but the biggest thing is trust and to not worry. We get drawn to the book of Matthew, chapter 6, and how it talks about not worrying and trusting that He is in control and knows what He's doing. We all try to do things on our own and freak out at times, but He always humbles us so we realize that He's in control with this; it's not our music, but His and things will happen in His time, not ours.