As a frontman for independent acts Crown Point and Silversafe, having released albums with both, Jon Davidson isn't exactly a rookie in the music scene. He's also released several solo albums, yet he still flies a bit under the radar. Despite relative obscurity, he's managed to book solo and full band gigs with the likes of Mat Kearney, Powerman 5000, Red, He Is We, and other notable acts in a variety of genres. And he continues his musical journey in 2016 with a new full-length album called Hymn, which contains Davidson's take on a handful of hymns. So, of course, this begs a couple of questions: what do they sound like, and does he do the hymns justice? Well, they're fairly unique as far as modernized hymns go, though I can't really say the same for Davidson's overall sound. Vocally, he's very reminiscent of Jeremy Camp, though he enunciates his words very thickly, and in that sense, he sounds more like Mac Powell. The music, all of which was written and recorded by Davidson himself, again sounds reminiscent of the likes of Jeremy Camp, but there's also an electropop vibe to it. Anyone familiar with the short-lived BEC Recordings group An Echo, No Less may hear some similarities between them and Davidson. By now (and if you haven't already looked), you may be wondering what songs Davidson chose to record for Hymn. Seven of the eleven tracks are classics, from "Nothing But The Blood" to "The Solid Rock" to "The Love of God." Most of them are fairly well-known; whether it's other artists covering them (like The Digital Age covering "It Is Well" or Citizens & Saints covering "Before the Throne") or just popularity amid your local church, you're probably familiar with the majority of this track list. The other four songs were penned by Davidson himself. And listening to the melodies and arrangements of the songs, there quickly comes a clear difference between the classic hymns and the Davidson originals. "Father," "I Need More," "What Kind of Love Is This," and "Dust and Promises" have a stronger contemporary pop-style melody than something like "The Solid Rock" or "I Have Decided." Hymn is the kind of album that I can really picture gaining Jon Davidson a respectable amount of momentum. It boasts a sound that can easily win the ears of many modern Christian pop lovers and give Davidson enough exposure to tour with the Christian music elite. - Review date: 9/30/15, written by Scott Fryberger of Jesusfreakhideout.com 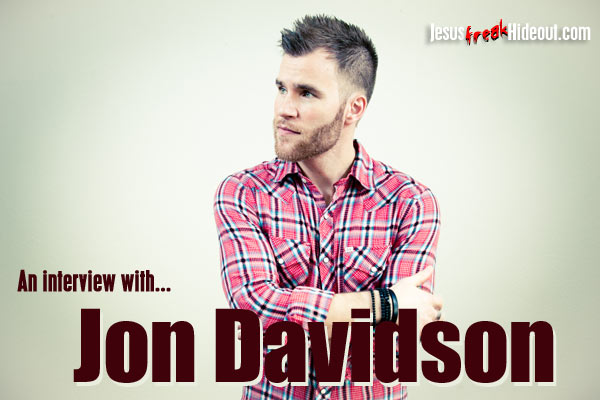 Jon Davidson: Well, there's nothing quite like the energy of being on stage with my bands, running all over the place with my wireless mic, and putting on a show. Also, touring with a band is way more fun than sitting in a car with yourself, your guitar, and your merch person for a month. However, playing solo is logistically easier, and I feel like I'm able to bare my soul during shows in a way that playing with a band seldom affords.

Jon: Ever since I learned to play the guitar at age 13, I knew I wanted to write my own music. I started writing my freshman year of high school, although I wouldn't let the general public hear most of the songs to come out of that era. One early song of mine, "Going Home," actually stood the test of time and has ended up on a solo album as well as a Silversafe (one of my bands) album.

Jon: It is! The album contains seven classics I didn't write, and four new hymns that I did.

Jon: A couple more, yeah. Maybe for a future album.

Jon: You guessed it! From start to finish, the recording process took a year and a half. A lot of that time was spent on the piano and organ parts (I'm a hack at keyboard). I'm pretty pleased with the end result, though.

Jon: In the Christian music realm, I'm a huge fan of Tenth Avenue North, Crowder, and Switchfoot. I grew up loving Jars of Clay, Bleach, Jennifer Knapp, even some Steven Curtis Chapman. I'm also a huge fan of bands like Thrice, NEEDTOBREATHE, Live, Brand New...bands whose lyrics contain some of the most profound truths ever penned.

Jon: I would say David, a man who struggled, who sinned, who repented, who repeated the whole cycle again. Yet, through everything, God called him a man after His own heart. I would take David...hmm...probably to some hipster vegan restaurant in Portland.

Jon: I'm not a Christmas music hater, per se, but the cheesy stuff drives me crazy. I feel like after Thanksgiving, everything is fair game, but if I walk into a store in October and hear "Santa Baby," I'm walking right back out. As for my favorite album: Dustin Kensrue's This Good Night Is Still Everywhere.

Jon: Well, these past couple of years, I've been going through some significant health struggles. Last year, I tore my Achilles playing basketball, and was on crutches for four months. This year, I'm dealing with two herniated discs in my neck, as well as a whole slew of other unexplained symptoms that began a couple months ago. I'm currently being tested for all kinds of conditions, and it's actually forced me into a live show hiatus. God has been teaching me that I do a pretty decent job of trusting Him when things are going smoothly, but I have a lot to learn about trust when life isn't going the way that I'd planned. I'm learning that through struggles, through pain, through doubt, and through hard times, God shows up in some of the most unexpected ways. Hopefully, He can use my experiences to help others He's put in my life, as well.