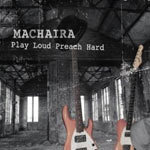 Machaira is a jazz and blues foursome from the Northern California area, and is composed of four tight-knit friends and believers in Jesus. The group has been playing for more than twenty years (in various incarnations), and have even traveled the world with their music. Machaira released a couple of albums during the nineties and then released their first album with frontman Jon Brown in 2002. Their sixth album release is a very full, full-length album called Play Loud, Preach Hard. The album's tracklist is definitely an intimidating one, as far as song length goes; eight of the eleven tracks are over six minutes long, with a couple of them reaching eight and a half minutes. Machaira feels very much like a "jam band," though, with the extensive guitar and saxophone solos that almost appear in more abundance than vocals; this aspect helps to justify the longer songs. This is important to keep in mind as you look into Machaira's music; if you're going to enjoy the musical offering, it's almost required that you have some sort of taste for jam bands or jazzy pop rock. This can easily be chalked up to what we like to call the "generational gap." Some styles of music don't translate to the newer generation as well as others, and jam bands often fall into that category. That being said, Machaira does come with a recommendation for those who are fans of classic musicianship; "Healing For The Pain" has some Stevie Wonder influence, with hints of Stevie Ray Vaughn in "Mercy is the Cry of My Heart." In addition, Machaira was able to snag some talent such as Michael Hossack on percussion (known for his work with The Doobie Brothers) and Mic Gillette on horns (known for his work with the Rolling Stones). That's some big name talent for a relatively unknown independent ministry band. Unlike most of what you probably know from these artists, Machaira has much more spiritually-focused lyrics. "The Forgotten" is a reminder to not forget about those less fortunate than we are: "It's a sad day in the neighborhood, I see a man that says 'Will work for food,' oh his dignity he has left behind, and the light goes green and off we drive, and he's forgotten as we go our way, just a fading image in the rearview mirror, have we forgotten, if not for God's grace, we could be there, forgotten." The album closes in somewhat of a worshipful fashion with "I Have Decided," as the band pledges their dedication to Jesus, singing "I have decided to open my heart, I have decided to give Jesus every part." It's short and simple, and lyrically, it's a great way to end the album, summing up what these guys stand for. Play Loud, Preach Hard is a culmination of all the things that Machaira has learned and stood for over their twenty-two years as a band, and it helps define who they are as brothers in Christ. Classic rock and jazz fans may be interested in what Machaira has to offer. - Review date: 9/27/12, written by Scott Fryberger of Jesusfreakhideout.com 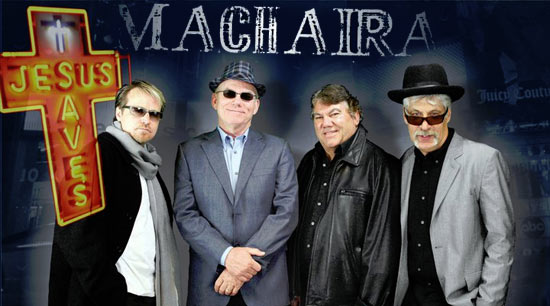 Dennis Hulbert: Machaira was originally a local effort between myself and a pastor named John Voelz. John was a good songwriter and we were collaborating on material as well. In an effort to take the music to the next step, we formed a band.

Dennis: To be honest, in the beginning, Machaira (ma-ki-ra) wouldn't have been my first choice. It's hard for people to say or recognize the name. It was John Voels's idea. If comes from Hebrews 4:12 -- "For the word of God is living and active. Sharper than any double-edge sword, it penetrates even the dividing soul and marrow; it judges the thoughts and attitudes of the heart." Machaira is Greek for "sword." Over time, the word/name "Machaira" has become more commonplace. We even had a young woman who got saved at a Machaira concert name our first born child Machaira and we had to trademark the name because more than once other bands have tried to use it.

Dennis: This would have to be to the Glory of God. Machaira has been through 20+ members over the years and has seen many changes musically and in direction. Many have gone on to be pastors or persue other interests. However, growing into a band that puts evangelism as its core purpose, never charging and performing out in the world, we have always seen God providing in a big way, giving us all the resources to continue. We presently have a professional semi-truck pulled stage, a sound system big enough for 10,000, jump houses, and all the resources and talent to facilitate large outreach events, and we do it all for free. We normally give away our CD's and we have given away thousands of Bibles through the years. We have toured Russia, which produced a documentary, been in a major motion picture and most importantly seen thousands come to know our Lord and Savior Jesus Christ.

Dennis: Actually Machaira released their first album in 1993, Lead Me Home. Then in 1997, we released Live At The Pilgrim, which also spun off several MTV style videos. It was in 2002 that Machaira recorded their first CD with present front man/songwriter Jon Brown. Play Loud, Preach Hard is our sixth album.

Dennis: This is a good question and we are humbled to have had such great musicians on this recording. This is another one of those "God things." As it turns out, Michael Hossack, legendary drummer of the Doobie Brothers was a close friend with our Engineer for the project, Rich Ayres. We wanted the style of percussion that Michael is famous for and Rich was able to facilitate getting Michael. The true blessing is this was the last recorded work of Michael for he passed away this year. Through this recording (hearing the words over and over) and the witness of Rich, the love of Christ was shared in his time of need. As for Mic Gillette (Tower Of Power) and Marc Russo (Doobie Brothers), they are considered two of the best horn session guys on the west coast. The material that Jon Brown wrote for Play Loud, Preach Hard is our most technical effort to date and we were striving for the horn parts to take it to the next level and they were the guys that could do that. After having such powerful horn parts, we then needed the background vocals to keep up. That's why we brought in Brent Bourgeois (producer of Michael W. Smith, Jars of Clay, 4Him, Robert Palmer, etc) to produce the vocals. Brent also did all the keyboard work on the project.

Dennis: Normally after I finish a recording I'm not in the mood to keep listening to it, but this hasn't been the case with Play Loud, Preach Hard. This CD has been in my car stereo for weeks now and I'm still finding it exciting. I really enjoy "Mercy" for its more of a musical journey, taking the listener to different places and grooves. I also enjoy "Fallen Down World." Originally, this song was kind of a sleeper and it almost didn't make the project, but once the horn section did their parts, it put this song in a whole new light.

Dennis: Jon Brown writes all our material. He has no set processes and he waits on God for inspiration. Sometimes, he comes up with material with little effort/time while some of the songs evolve over months. Normally, he introduces a song to the band and we jam it into existence over a period of several months. Not all the songs make it to our set list. The songs on Play Loud, Preach Hard is a collective work from the past five years.

Dennis: Twenty one years ago, Machaira needed a place to play so we came up with the idea to put on a Christian Concert event called Praise In The Mountains. This annual event has turned into the longest running FREE Christian outreach concert that we are aware of. Machaira Ministries does several similar outreach events each year, but PITM is our largest. We have grown as a band and ministry through hosting this event and most importantly we have seen many come to know Christ at Praise In The Mountains.

Dennis: It's not about Machaira, it's not about our music or clever songs, but it's being faithful with what God has given us. Learning the art of receiving is essentially an act of faith. The world with its nonstop demands needs to be put on hold from time to time and God needs to be center stage. Serving Him is truly the blessing and Machaira has allowed me to serve Him through the years in a very humbling and rewarding ministry.