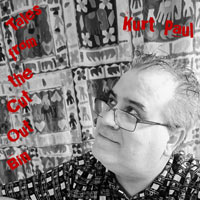 Kurt Paul
Tales from the Cut Out Bin


After years of playing with various acts, as well as honing his skills as an acoustic performer, Kurt Paul is now taking the leap into making his first solo record. Tales from the Cut Out Bin is not an acoustic record, though; in fact, it's just about anything but acoustic. Instead of a minimalistic approach, it's almost as if Paul's tactic is to throw together as many sounds as he can and see what sticks. This results in tracks like "POP!," "Kick Me While I'm Down," "Rest," and several others, which are cacophonous tracks filled to the brim with sounds and instruments that, while played in sync with each other, don't otherwise complement each other. It's rather odd to hear songs with a clear rhythm and time signature that simultaneously sound so offbeat and chaotic. Thankfully, the album's lyrics fare a bit better, and are even occasionally convicting. The prime example is "Let's Talk About The Weather," which uses satire while basically talking about being ashamed of the faith and/or afraid to take a stand on issues that are hard to talk about ("At the end of a long, long line / they all agree that the weather is fine / but outside you see the stormy cloud / hold your tongue, don't say it out loud / you wouldn't want to be the cause of division / don't want to end up in a social prison / you cross your fingers and you say / 'it's a beautiful day, it's a beautiful day'"). But even when the lyrics are at their best, the vocal effects can often make them hard to understand. Overall, Tales from the Cut Out Bin is a challenging listen. Hopefully future releases will rely more on the acoustic sound he's more known for.
- Review date: 6/15/20, written by Scott Fryberger of Jesusfreakhideout.com 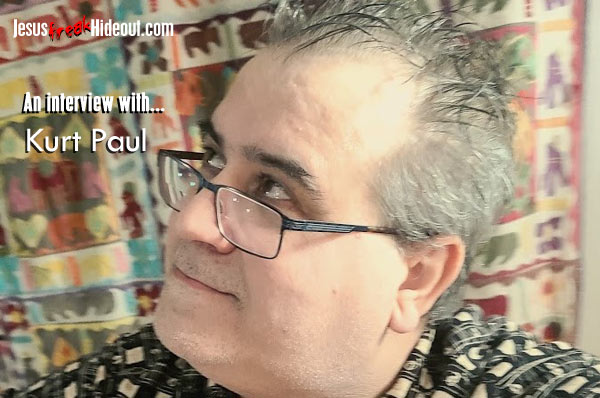 Kurt Paul: I started playing guitar when I was nine. I didn't have a lot of support in it, while growing up, so I didn't really practice enough, till I was around eighteen. I've played percussion with bands. Congas and bongos. I also play keys, drums & bass. Not really well, but enough to get by.

Kurt: I moved from Oklahoma to Colorado for a career change. So, I didn't know any musicians in the area, to start. Also, I'm a massive home-body. I didn't want to get out there and go through the whole "trying to find a band that has a shared vision." As you have probably noticed, I have a bit of an odd approach to music. So, I could spend years trying to find musicians that would enjoy what I'm writing. Plus, I like a good challenge. I first had to rise up to that challenge. But, once I got started, I couldn't put it down.

Kurt: I could make a list a mile long. But the main ones should do. In Christian music, I'd say Neal Morse, the man is an amazingly talented songwriter. The Myriad, Burlap to Cashmere. Outside of that, Brian Eno, Peter Gabriel, Erik Satie. I listen to a lot of German music. That goes by the, mildly, derogatory term, "Krautrock." I'm also a big fan of world & African beats. Odd meter stuff. Lyrically though, I have to shout out to this guy named David. I think he was a king or something. He had a way with expressing the awesomeness of God, as well as, his personal pain from his many trials. He had that goin' on.

Kurt: Well, the "Cut Out," for all them young'ins, (I'm showing my age here) is music that was rejected by the industry as unsellable. So, they would put a physical cut on the sleeve to let record stores know that they were unreturnable & had to be sold at a discount. But, some people, like myself, really liked looking through those bins to find treasures. I've often felt like one of those scarred records waiting to be picked up. Fortunately, for me, Jesus is a music nerd.

Kurt: Not really. I do this on my own, for one. Now if a group showed up at my door and we all got along, I could probably be swayed. I like playing live. I really love working in the studio. Music is more like painting for me. I love creating the work, more than showing it off to others.

Kurt: To be creative as our Lord is creative. To have hope, when things seem dire. And to let them know bad things can happen to believers. We can fall, but we can get back up. And Jesus will be with us, even in our darkest of days.

Kurt: My family suffered a pretty horrible tragedy several years ago. It took us years to finally fix the issue, but it really took a toll on me. I was in a lull, where all I could say in my prayers was, "I don't know." Making this album was actually very therapeutic for me. I was able to get a lot of the pain out of my system. But I do realize, that God was talking to me, through the whole ordeal. He never left me. What I've learned, is that sometimes you have to do like that David guy, and just blurt it out.

Kurt: I have the "Lamb Up Productions" Facebook page. The album is on all sorts of music sites. I've been thinking about doing a vlog, but that would take away from recording time. And that's what think I'd rather do. I have several songs that I've written, but never recorded. And they are, for the most part, on a lighter note.

Kurt: love you all. But not as much as Jesus does. I would say, one of the most important things I learned as a believer is you need to be brutally honest and sincere with God. If you are confused, hurting, lonely, angry, whatever. Talk to God about it. Trust me, you can't hurt him. He's God.