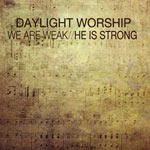 Daylight Worship
We are Weak//He Is Strong

In late 2009, Canadian worshippers Daylight got together and recorded a seven-song EP called Behold The King, which they released October of that year. It wasn't great, but the guys in the band displayed their passion for worship and ministry through their songs well. This year, they have a new set of songs for everyone to hear, and it's their first full-length album, which they've titled We are Weak//He Is Strong. The biggest positive aspect of the album, as well as Daylight's music in general, is their passion. It's very clear that not only are they fervent about worshipping the Lord and bringing people into a state of worship with them, they're also passionate about the music that they make. You can hear it in Jeremy King's singing, as well as in each part of the music. The opening track, "We Arise," may be the album's strongest track. It serves well as an opening song, and the music and lyrics are fairly well-written. "Christ Is Risen" is alright overall, but the quality of the music and lyrics starts to drop slightly from there on out. Songs like "Mighty God" and "He Alone" are typical corporate worship songs that are great for a live setting, but for an album, they don't work quite the same way. "We Set Our Hearts," however, is rather enjoyable, bearing a sound that resembles The Fray's piano-based pop rock, with a little bit of synth mixed in as well. Along with "We Arise," it makes for a highlight of the eleven tracks. The album ends with a live rendition of their song "Our Rock." I found it a little odd to include a live track at the end of an otherwise non-live album, but it actually works pretty well for Daylight to include the very worshipful song in its live format. Maybe it's the fact that it's not blatantly obvious that it's a live version when you're listening (other than some of the vocal work sounding off key once or twice), but it's a nice addition. We are Weak//He Is Strong is a step in the right direction for Daylight, both musically and lyrically. It's not a great album, but it has plenty of enjoyable factors that tell me that Daylight has a lot of potential to create something very good. Worship music fans will be delighted at what We are Weak//He Is Strong offers. - Review date: 9/1/11, written by Scott Fryberger of Jesusfreakhideout.com 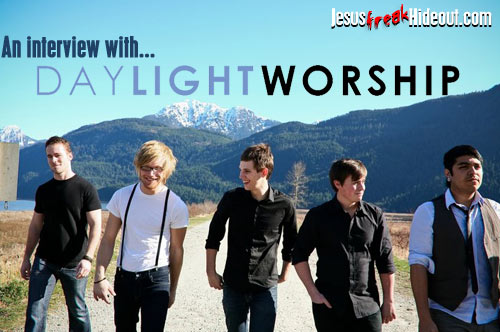