In the midst of playing a few random shows after a successful tour with his band The Almost, frontman Aaron Gillespie took a few minutes after a show to speak to JFH's Scott Fryberger about his new solo album, upcoming tours and the bad weather outside...
This interview took place on: 12/11/10.


Aaron Gillespie: Alright, you get one question.

Aaron: No, we're gonna start a big worship night tour in January. I just got home from 75 dates with The Almost. So we just did that. I just do a lot of weekend stuff when I'm home, just 'cause it's fun. So yeah, I'm off tour right now.

Aaron: I do like two shows a week, when I'm home.

Aaron: I hate snow. I hate how it smells, looks, feels. I hate that it's wet.

Aaron: Yeah man. I mean, it all kinda runs together after a while. I hate that I can't provide you with a fantastic story, but we just met so many kids that are just busted and broken-hearted and need help, and it's just wonderful to offer Jesus to them, even if it's just for a minute, you know? We got to tour with Switchfoot, which was cool.

Aaron: The Almost was all mainstream attention until last year.

Aaron: It's a long story, but I really feel like we just had a story to tell within the Christian market about what we had seen outside. God had kinda impressed upon me to do so.

Aaron: I had a band for that.

Aaron: Pretty much. Friends and people that I know from other places and stuff like that. 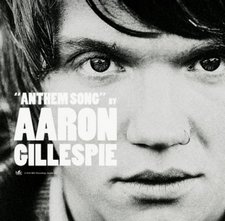 Aaron: I've just always wanted to make that record my whole life. I got my start as a musician leading worship as a kid, like fourteen. I always wanted to do it and never could. I never had time. It never worked. But now it's finally working and I'm finally able to just drop everything to do it. So we did.

Aaron: Nah. The Almost is actually doing like sixteen Acquire The Fire's at the beginning of the year. And I'll be doing worship dates in between those. It's a little crazy, but yeah. And we're gonna start working on a new record soon.

Aaron: Nah, not that I can tell you right now.

Aaron: I don't know. I think so. I think I considered putting other songs out, like other projects. But I don't know that I'd be allowed. I'd like to do something. But I don't know if I'd be allowed to do a whole record. I don't really know how that works. But you know, Chad [Johnson] is the first guy I ever met in the music industry. Chad offered me my first shot when I was sixteen. It was for the record deal for Underoath. It was before Tooth & Nail, even. Before he worked there, he had an indie record label called Takehold. It was when Underoath was just me and three other guys, guys that aren't in the band now.

Aaron: Oh I just don't know if I could put out a whole record. I have a record deal and I don't know how that works.

Aaron: Yeah, it's Tooth & Nail and BEC, it's all one thing. It's all one office.

Aaron: Yeah. Most record labels are contractually binding, so you can't just like jump ship and do something else. It doesn't really work that way.

Aaron: Maybe. I was in the studio for that. I did some stuff, but I don't remember what it was, or what songs they were. It all kinda runs together.

Aaron: I've been doing a lot of weird guest stuff, yeah. There's a Universal/Motown band called He Is We. I just sang a duet with that girl. It's pretty much just a girl. There's a guy there too, but I don't know what he does. I think he might just help her write songs. I have no idea. But anyways, it's a duet for kind of a pop song. It was fun. Uh, I've written two songs for the new Run Kid Run record, then two songs for the new Abandon record. And yeah, I do a lot of stuff like that.

Aaron: I did sing in one of the Run Kid Run songs, yeah. I sang on Relient K's newest record, Forget and Not Slow Down. That came out [in '09]. I like doing stuff like that, it's fun.

Aaron: Oh thanks! I love that song man. I love them, they're so good.

Aaron: Yeah. Yeah, like Botch and The Refused and Converge... that's pretty much it. I don't like a lot of heavy music. Never really have. I like the idea of it and the heart of it. But I never really got into every band that came around the corner playing D chug music. I never really understood it.

Aaron: I love the artistic ones though. I mean, more power to anybody who's out there doing what they love and doing it for a reason and having a good time doing it. I just never got into it or understood a lot of it. I like a lot of it, but yeah.

Aaron: Out of like the four or five that I played, two.

Aaron: Yeah. You just can't release records around this time of year because they just get ignored.

Aaron: Yeah. You just can't do it. And if you release it in January, all the music business people are kinda closed down. I don't know, I don't really care about all that stuff. But the label won't put it out until March, so whatever *laughter*

Aaron: They are. Yes they are.

Aaron: We have the worship tour that starts in January, and it's like two and a half months long, and it goes through when the record's released. And then we're going to South America with The Almost in April. Then Europe in May. I don't know dude. My phone's dead or I'd look at my calendar and tell you *laughter*. But I'm going somewhere. I'm always somewhere.

Aaron: No, just thanks for talking. *yawns*