If you've heard of Fusebox, caught the !Hero Tour live last year, or some of Rebecca St. James' shows a few years back, then you're pretty familiar with Billy Buchanan. Billy is the frontman for the modern worship act Fusebox and he recently took a few moments to answer some questions on the band's latest record Once Again and he experiences with the !Hero Tour...
This interview took place in October, 2004

Billy Buchanan: We started out as the touring band behind Rebecca St. James. We eventually got our own record deal, and toured as her opening band and back up band for 3 years.

Billy: We went through a ton of names, and this one just stuck. There's no deep spiritual meaning behind it.

Billy: I was much more hands on this time around. I wrote or co-wrote 7 of the 10 songs on the album. I also co-produced most of it. I really wanted it to be more of a personal album.

Billy: "Hello" is my favorite song on the album. When I wrote the words for this song I felt so inspired. Also, I think it's a very modern track, with the spoken word sections and all.

Billy: "Once Again" has become a very meaningful song to me. That song has changed a lot of peoples lives. I get the emails everyday about it.

Billy: This is a good question. John Cooper and I are great friends. I felt more honored than anything. I think John is one of the best rock singers out there. And I don't mean just in Christian music. I mean period. So for Eddie Degarmo and Bob Farrell to approach me and offer me the role, man it was pretty mindblowing. I didn't feel any pressure to do what John did on the album. As a matter of fact, Eddie and Bob really leaned on me a lot to develop the character live. I was one of the only cast members who had any acting experience. They really trusted me with the character. I just felt like I knew Kai. He reminded me of a lot of preachers I grew up watching on TV. :-)

Billy: You know at first I really struggled with it. Here I am a Christian having to play a guy who hates Christ with a passion. It was difficult. But you know, I told myself that if I play this role the way that it should be played, then maybe the audience can get a glimpse of what Jesus went through for us. From that moment on, I enjoyed beating up on Tait every night. :-)

Billy: Hero made it so much more real to me. It was kind of like watching The Passion. I got a whole new perspective on what Jesus went through for us.

Billy: I got to hang out with the some of the most talented people on the planet. It was truly inspirational.

Billy: Yea. I had to wear these huge ear rings every night. Well one night, right in the middle of one of my songs, one of them flew off on the stage. Everyone thought I had ripped my ear off. It was pretty hilarious.

Billy: I would love to. It, so far, has been one of the highlights of my career. I don't know what Eddie and Bob have planned for the future of Hero.

Billy: To treasure my wife. She is amazing, and sometimes I take her for granted. he has been my best friend for almost 14 years. God's really been showing me how to love her like Christ loves the church. It's taken our marriage to a whole new level.

Billy: Relevant music that ministers to them on their level.

Billy: God's been putting a lot on my heart lately. I've been writing a book tentatively titled "Ten miles to Georgia". I played the Atlanta club scene for ten years before I got into Christian music. The book is about the years I spent on that scene, the people I met and worked with, and eventually my conversion. The music on the next album will tie into this.

Billy: Thanks for showing Fusebox so much love on your site. We really appreciate it. 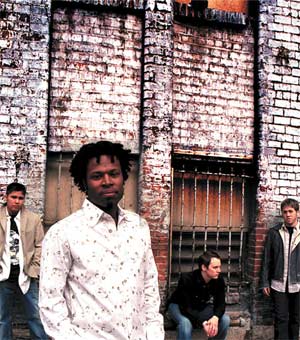