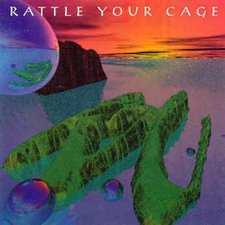 Rattle Your Cage
by Barren Cross

A man walks into a corner grocery on 5th street
Points his gun at the unsuspecting
Says give me your money. Give it now
But if you move Ill pump you full of lead to the ground
With trembling hands, he's handed a bag of small bills
That dont add up to his mainline price tag
In a fit of rage he puts the barrel in the man's mouth
Pulls the trigger and is off with a blood thirsty shout

Next day he rises from his sleep full of hunger
No money for food cause he spent it on dope
So he goes in search for another unsuspecting
He eyes a bank but invades without logic
He saw who pushed the button, and gunned him down
But he got caught this time how he's downtown
So the court gives mercy to a still merciless man
Out on parole years later the victim's forgotten

Now he's out but it hasn't changed him a bit
He's still the killer inside, and he'll steal in a minute
That day a corner preacher said God can heal ya man
Just get on your knees and ask forgiveness. He'll set ya free
But he knows his way into a store where the money looks good
But this time he's met by a suspecting man
Who raises a gun but still not quick on the draw
And is gunned down quickly his face filled with awe...

Tyson Mostenbocker Someday I'll Make It All Up To You: Summer Songs (Acoustic) EP [Tooth & Nail]

idle threat Nothing Is Broken For Good EP [Tooth & Nail]