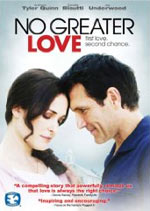 Jeff and Heather were the "lucky ones." Best friends from childhood, high school sweethearts, and married by 22, they were inseparable soul mates.

After the birth of her first and only child, Heather Baker (Danielle Bisutti) fell into a deep depression. Hopelessly lost, she did the unthinkable - she abandoned her husband and her infant son - and vanished. Jeff Baker (Anthony Tyler Quinn) was forced to raise their son Ethan as a single father.

Ten years after his wife's disappearance, Jeff is finally ready to move on and is on the verge of marrying his new girlfriend. His world, however, is dramatically rocked when Heather shockingly reappears in the most unusual place. (from NoGreaterLovethemovie.com)

Most film genres stick pretty faithfully to a certain formula. And for anyone familiar with Christian films can probably spot the evangelical film formula pretty easily. But just as other genres vary in the quality of the execution, so do such movies in the Christian industry. Mainstream film company Lionsgate surprising presents No Greater Love - a unique story about a man whose wife disappears for ten years and is unexpectedly found one day working for a local church. While the story feels a bit contrived at times, what makes No Greater Love work as a whole is a strong cast who turn in convincing performances and a script that succeeds more often than not.

My problem with a lot of Christian films is in the quality of the production. Just like with music, it isn't always enough for the heart of those behind the project to be in the right place. It takes a lot to create a great film and rookie director Brad J. Silverman does a decent job piecing together an impactful final product. No Greater Love gets off to sort of a bumpy start, feeling like the usual indie Christian film. However, central character Jeff Baker is strongly performed by Anthony Tyler Quinn, which gives the film credibility through his deliverance of even some iffy dialog. Veteran actor Jay Underwood, who had left the film business to become a pastor, pretty much plays himself as Jeff's church-going friend, Dave. Underwood goes a bit farther than playing a token happy-go-lucky Christian, thankfully, giving a genuine performance here. But what really helps make No Greater Love probably better than it really is, is the added strength of Danielle Bisutti's performance as Heather and her chemistry with Jeff. There's an unmistakable love between the two of them brought to the screen by these actors, and that's precisely what this film needs. You aren't expected to just buy into their love because you're told to. Much in the same way that Fireproof managed to, despite its mediocre acting and average production, I found the story pulling at the heartstrings more than a couple times.

It's difficult to make a story like No Greater Love without it feeling preachy at times. While it in no way was nearly as ham fisted or poorly executed as seen in last year's deservedly straight-to-video In The Blink Of An Eye, No Greater Love makes no bones about existing to present the Gospel message. And much like Fireproof, it ends up dealing a lot with marriage. The unique approach to having an emotional story about a spouse gone missing but returning at an entirely inopportune, yet timely moment in someone's life years later might cause classic movie fans to recall Cary Grant's comedy My Favorite Wife, but No Greater Love plays it completely straight and dramatic. To add to that vibe, CCM artist Michelle Tumes (formerly on Sparrow Records) channels her Enya influences found on a few of her albums to write a score for No Greater Love. And although Tumes does manage to create some lovely melodies at times, none of it ever really seems to match the feel of the film. I can't say I'd ever envision the soundtrack to Jeff's turmoils and trials to sound anything remotely like Enya, but that's the feel Tumes chooses and, along with some typical CCM pop radio fare from other artists in addition to Tumes' score, it just doesn't fit here. The end result actually detracts a bit, and adds to that "Christian home video" vibe.

When it comes to content, No Greater Love is a safe one for family, but I can't imagine the premise being too interesting for younger audiences. It's a pretty serious film, despite some charming moments, and with the film opening immediately with a flashback to a verbal fight between our central characters, it kind of gives the feel from the start that this one is mainly aimed at adults. No Greater Love gives plenty of food for thought on marriage and divorce, as well as love and the kind of changes God can bring to a person's life. Thankfully, No Greater Love doesn't rush too hastily into showing any spiritual conversions, and instead takes a more thoughtful if not realistic approach to it. Most of the way Silverman chooses to direct these sensitive moments is thoughtfully done, even if the script isn't as strong as it needs to be. And that's where Quinn and Bisutti make up the difference with their performance. However, Silverman's direction feels most heavy handed or maybe even a little sloppy, when he chooses to toss in a flashback (complete with a wooshing sound, whisking us back to the past) or he chooses to end a scene rather abruptly without a sense of resolution.

No Greater Love isn't a perfect film by any means, but it's yet another step in the right direction for Christian filmmaking. Most of its flaws are forgivable, even though it tends to suffer from some preachy moments that are likely to alienate the very audience those scenes are intended for. First and foremost, No Greater Love will be most appreciated by Christian adults who are experiencing some marital problems or have even gone through a divorce. It's a nice look into relationship-based love as well as the love of our Heavenly Father.

Alcohol/Drugs: The movie opens with an argument and shots of Heather drinking to deal with it; Jeff and his friend drink champagne while celebrating a business deal; After an argument with someone, we see Jeff get out a bottle of alcohol and pour himself a drink; We see Jeff and Kate drinking wine at his house

Violence: We see a flashback of a heated argument between Jeff and Heather; Jeff snaps at Ethan while on the phone (but apologizes to him later). Disclaimer: All reviews are based solely on the opinions of the reviewer. Most reviews are rated on how the reviewer enjoyed the film overall, not exclusively on content. However, if the content really affects the reviewer's opinion and experience of the film, it will definitely affect the reviewer's overall rating.