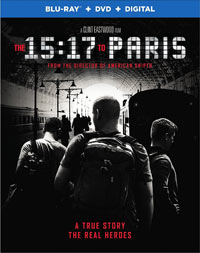 In the early evening of August 21, 2015, the world watched in stunned silence as the media reported a thwarted terrorist attack on Thalys train #9364 bound for Paris-an attempt prevented by three courageous young Americans traveling through Europe. The film follows the course of the friends' lives, from the struggles of childhood through finding their footing in life, to the series of unlikely events leading up to the attack. Throughout the harrowing ordeal, their friendship never wavers, making it their greatest weapon and allowing them to save the lives of the more than 500 passengers on board. (from Warner Bros.)

True stories of heroism can be some of the most inspiring to hear. We're living in a time when most of the heroes we see and enjoy on film wear capes or have superpowers, but in real life, heroes are the kind of people who do the right thing amidst extraordinary circumstances that often saves lives. And for three American friends on a trip in Europe in 2015, it was a matter of risking their own lives to save a train full of strangers from a terrorist.

Legendary actor and filmmaker Clint Eastwood, who has more recently made feature films about heroes in Sully and American Sniper, takes on another true event with The 15:17 To Paris. But the major difference between this film and Eastwood's previous adaptations is that the main characters are actually played by the real life people. This of course lends some realism to the story, however, their lack of acting experience is glaringly evident. Furthermore, aside from a handful of recognizable faces (and real acting talent) also present, it feels like literally every other person in the film is acting on screen for the very first time -- from the children versions of the main characters to everyone on the train or people the heroes meet while traveling or in training. It's to the point where, if you didn't know Eastwood was the film's director, you'd never know it was a professional production. It's frustrating because the main guys involved in this intense incident -- Spencer Stone, Alek Skarlatos, Anthony Sadler -- are hardly believable in their own roles. And they don't even play well as best of friends on screen. (Ironically, some behind the scenes footage in the Extras of the home video release show them laughing together, and that seems considerably more natural than anything we see in the movie itself.) It's commendable to see these guys acting in their own story, but their performances are so wooden, and their dialog is often so lifeless, that you can feel like you're watching some kind of homemade video on YouTube but with a Hollywood budget. (Or, even worse, it feels like a bad entry into the PureFlix catalog.) Comedic actors Jenna Fischer, Judy Greer, Tony Hale, and Thomas Lennon all have really short scenes in the film, and once they disappear entirely to let the "non-actors" (as the crew calls them in the Extras) take over, you find yourself longing for them to appear again.

But what makes the lack of acting chops tougher to endure is the fact that the story is often just plain dull. The camaraderie between the kids when they're younger should be setting up a lifelong friendship, but it doesn't come across very well. It feels like a "sweded" version of the (far more convincing) relationship between the Stranger Things kids. It's just all so poorly told and portrayed. And when we see the kids suddenly portrayed as the real life guys, their journey from couch potatoes to Real American Heroes is slow, arduous, and surprisingly soulless. I love a good drama that can feel pretty slow at times (even something like Lost In Translation or All Is Lost), but it takes a good script and even better acting to pull it all together. The 15:17 To Paris just doesn't have what it takes -- not even in part.

The best thing about The 15:17 To Paris is undoubtedly the thrilling action sequence at the end of the film that inspired the film to even be made in the first place. While it's all been documented and is now retold visually for viewers to experience, it still manages to feel surreal at best. It's sad to realize that action sequences in movies like Mission:Impossible or any of the Jason Bourne films somehow feel more realistic than a sequence based around something that actually happened. Heck, the action in Liam Neeson's The Commuter -- another train film -- that released around the same time as this movie felt a little more believable in the way it was filmed. Still, I have to admit, knowing that this fight sequence happened for real and in a way similar to what we see on screen definitely still connects on some level. By the time we get to the final scene where France honors these guys for their heroism, I was emotionally involved in the story. I just can't help but feel like there must have been a better way of executing all of it for a feature film to really do the story some justice.

The 15:17 To Paris does have some spiritual themes, given that the three Americans grew up together in a Christian school with believing mothers. (It was definitely a trip to hear Judy Greer tell off a teacher that God is bigger than anything the school system can throw at them, or to hear Jenna Fischer tell Alek Skarlatos that God told her He has big plans for him.) However, a few of the characters at the Christian school - including Tony Hale's gym teacher and Thomas Lennon's principal - don't paint Christianity in too positive a light. And the main trio of heroic Americans swear frequently and are shown getting drunk and dancing provocatively with women in a club in Amsterdam. It's not the worst film content for something like this, but for anyone hoping to use this as something for a small group or Bible study, there isn't a whole lot here you can use. (The guys talk more openly about their faith in the short behind-the-scenes extras, though.)

In addition to regular uses of the "S" word from the main cast, there are a few uses of blasphemy - 1 "J-sus" from the Christian school's principal, another "J-sus Chr-st," and a few uses of "g*dd*mn" from an instructor in the military. The actual terrorist attack on the train at the end is quite intense and bloody. A man is shot in the back and we see blood all over his neck and dripping all over the floor in puddles. When people come to his aid, a person puts their fingers on his neck to stop the bleeding, but there's blood splattered all over his entire face and head as he struggles. During the subduing of the terrorist, Spencer is slashed with a box cutter on the back of his neck and head and on his hand. As such, there's lots of blood from that -- on him and on things around him. The whole sequence is very intense and unsettling.

The premise of the film is definitely intriguing, including the fact that it uses the actual people from the event (including the train victim who was shot -- who obviously survived :) ), however, even with a filmmaking expert like Eastwood at the helm, The 15:17 To Paris just doesn't work as an hour-and-a-half movie with primarily "non-actors." If you like documentaries, this almost qualifies as one, but if you're looking for a well-made, well-told, engrossing telling of this incredible event, The 15:17 To Paris sadly isn't it.


Along with the feature film in HD, the Blu-Ray / iTunes copy of the film offer these two Extras:

The 15:17 to Paris - Making Every Second Count (8:10) - This featurette is actually better than the movie itself. In just 8 minutes, the three guys (and the gunshot victim) retell the events of that day set to footage from the film. They also talk about the impact it had on their lives and the lives of others.

The 15:17 to Paris - Portrait of Courage (12:26) - Clint Eastwood and the rest of the main crew talk about the story, heroes in general, and making the film. It's another interesting featurette that is probably better than the film itself (1 "S" word from a scene).

Sex/Nudity: We see the guys dancing in a club, somewhat sensually with women. (Some of the women have low-cut, cleavage-revealing attire). There appears to be some groping while they're dancing as well.

Alcohol/Drugs: Stone and Anthony have beers while sitting on the couch; The guys have drinks in a bar; We see the guys drinking a lot in a club and then waking up hung over the next day. A waitress offers to bring them drinks but they turn them down; Two of the guys have wine on the train.

Blood/Gore: We briefly see blood on the carpet on the train; When Spencer is in an EMT training class, we see a realistic looking dummy on the ground with very gory/graphic wounds to it and fake blood around and on it; We see a man get shot and then we see blood on his back on his shirt where the bullet entered, and then lots of blood dripping from his head and neck onto the floor; We see blood on Spencer's face and the terrorist's face as they fight. The terrorist slices Stone's hand with a box cutter, as well as the back of his neck, with lots of blood spraying. We see blood on the window behind them as they fight; Spencer has lots of blood dripping down his bare back while he helps the gunshot victim (with tons of blood on the victim's neck and on Spencer's hands); The gunshot victim and Spencer have blood and bandages on them after they get off the train; Spencer's eye is bloodshot and discolored in real footage of the award ceremony.

Violence: In school in gym class, some kids are hit with a dodgeball while not playing; People on a train wrestle with a terrorist holding a gun. A passenger pulls the rifle away from the terrorist, but the terrorist pulls out a pistol and shoots the man in the back; When Spencer is in an EMT training class, we see a realistic looking dummy on the ground with very gory/graphic wounds to it and fake blood around and on it; We see the aforementioned victim get shot again. Disclaimer: All reviews are based solely on the opinions of the reviewer. Most reviews are rated on how the reviewer enjoyed the film overall, not exclusively on content. However, if the content really affects the reviewer's opinion and experience of the film, it will definitely affect the reviewer's overall rating.