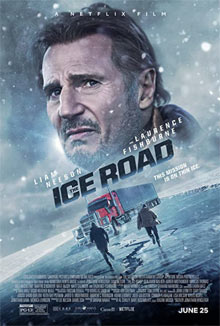 After a remote diamond mine collapses in the far northern regions of Canada, an ice driver leads an impossible rescue mission over a frozen ocean to save the lives of trapped miners despite thawing waters and a threat they never see coming. (from IMDb)

The Ice Road is the latest action film from legendary star Liam Neeson. With other recent releases from the actor also being action-driven films, namely The Marksman and Honest Thief, he's proven that he still, as he says himself, has some fights left in him. The other recent films from Neeson weren't extraordinary by any means, but they're certainly decent, entertaining thrillers. Neeson is a versatile actor, and even when the movie is mediocre, he makes them enjoyable at least - like his other movies Unknown, Non-Stop and The Commuter, for example. However, this time, The Ice Road, while still entertaining, crosses the line more than a few times, devolving into silly plot points, unrealistic events, and terrible special effects.

The Ice Road actually opens with promise. A mining accident leads to a scrambling for rescue trucks to brave the treacherous "ice road" to reach the trapped survivors. It starts to feel a lot like the 2015 mining accident movie The 33, but focuses much more on the rescue team than the men inside the mine. Neeson plays Mike, a war veteran and seasoned trucker who is a bit down-on-his-luck because he and his mentally-challenged brother, Gurty, can't hold a job. Mike takes care of, and protects, his brother who became mentally challenged from his time fighting in Iraq. When we first meet Gurty, other truckers are playing "keep away" with Gurty's thermos like children on a playground. It seems overtly juvenile, especially for grown men, and was the first moment I began to worry about this movie. As Laurence Fishburne's likeable character, named Goldenrod (a curious name choice), assembles the rescue team to brave the ice road, he enlists the help of a young twenty-four-year-old girl of Native American heritage named Tantoo, played by Amber Midthunder, who was just arrested for protesting against white people. It's another unfortunate plot choice. Throughout the course of the movie, Tantoo makes several anti-white remarks and then is only justified when a villain, who happens to be white, makes remarks about her "people" and their traits. It starts to feel like the movie is just trying to fuel racial tensions when it doesn't need to. (I'm aware of America's ugly history, but it just seems unnecessary to be drudging up dissent between races in 2021 - especially in the current social sensitivities.) It really doesn't serve the story and only feels like a side agenda tacked on to start trouble. (This is only furthered when she is accused of something she didn't do because of her prejudices, and then is proven innocent.)

The movie definitely has its moments of thrills and action, but most of it just feels shoehorned into the movie to make it more action-packed than it needs to be. Early on, after a character without much knowledge of the ice road's inherent dangers remarks how much it doesn't seem all that dangerous, and another character explains what could go wrong, the worst-case scenarios they described begin happening. The Ice Road proves itself to be just another one of those movies where everything the characters describe that could go wrong happens right afer it's explained. And things just get worse from there on out. A team of gunmen end up trying to actually stop the rescue attempt, leading to over-the-top action sequences that don't feel right for this particular movie. Meanwhile, as the miners continue to run out of air, some of them discuss killing some of the survivors to alleviate the strain on the remaining oxygen. The movie's central bad guys then prove to be unreasonably really bad when it reveals their true intentions, and you have to wonder who signed off on these story developments and why Neeson would sign on for it.

The content of The Ice Road is mostly edgy when it comes to profanity. Tantoo uses the movie's lone "F" word when she tells some guys off, and there are almost 25 uses of the "S" word and a surprising amount of blasphemy. The violence comes mostly in the latter half of the movie, when a team of gunmen try to stop and fight off Mike and the rest of the rescue team. Earlier, one man is shown with a cable accidentally wrapped around his ankle and we see his leg horribly mangled and twisted as he's pulled under the ice to die (but somehow is able to remain on the surface momentarily before he's cut free and pulled under). Later, a character is impaled in the chest with a tree branch, which we briefly see before it is pulled out (with some blood on their clothes). The rest of the visible violence is punching, kicking, shooting, etc, with the only blood being some scrapes and cuts on characters' faces. Still, the fisticuffs are drawn out over much of the last act of the movie.

If you like mindless action with passable, but poor, special effects and decent performances from a cast trying to make the silly material work, then The Ice Road works for passing an hour and forty five minutes. Maybe there wasn't much of a movie to be found here without the over-the-top embellishments, but I still can't help feeling like this could have been a better movie if approached from a different angle. Either way, if you don't take it seriously, it's still reasonably entertaining, but otherwise, its silliness (and unnecessary profanity) gets in the way, making it an easy movie to recommend just skipping.

Alcohol/Drugs: Goldenrod sarcastically asks a guy what he's been smoking after he suggests the dangerous ice road trek.

Blood/Gore: A cable catches around man's leg and pulls him through the ice. His clothed ankle is visibly twisted and broken; Tantoo has a bruise on her cheek; Gurty has some small bloody cuts on his face; We see some on the villain's face; We see a branch sticking out of a character's chest with blood on their clothing; We briefly see blood and bloody cuts on the villain's face; Mike has blood on his face and eyebrow.

Violence: An explosion in a mountainside knocks a truck off a cliff; Workers rush out of a tunnel as it shakes and collapses; We see another explosion happenening in a tunnel. We then see guys being dug out from rubble; Mike punches a guy in the face, knocking him down on his back; The ice breaks under a truck and begins pulling in the truck; A cable catches around mans leg and pulls him through the ice. Another character cuts a rope holding him up, causing him to sink and drown; The ice continues to break as the survivors rush away; Two rigs tied together with a cable flip on their sides; The ceiling in a shaft collapses on some men. They get dug out; Tantoo pulls a gun on a couple characters. A man grabs it and gets it away from her; Tantoo tries to hit a man who then punshes her in the face, knocking her out; Dynamite explodes on the ice in a fireball (we see it again in the distance); Mike smacks Gurty on the head; The truck winch snaps off and the truck trailer sinks. Mike jumps out of the cab to see what happens and notices Gurty is missing. He jumps under the water and pulls him out; The villain uses a lighter on Tantoo's nose to prove she's awake and faking still being passed out; A rat in a box bite's the villain's finger; Tantoo hits a man repeatedly with a canister and throws him out of the truck; Gunmen get on Mike's truck and hangs off the doors. They then break the glass and get in with ice pick-ax and fight with Mike. Mike hits guy repeatedly as he tries to strangle him, then pushes him out of truck and he's run over by the back tires; A man struggles with Gurty and they beat each other with a helmet. Gurty then wraps his legs around the man and strangles him; Tantoo shoots at the villain; A truck crashes into the side of a car, knocking it off a cliff, causing it to tumble down the cliffside; Several explosions cause an avalanche. The snow rumbles down a mountainside and hits a truck, breaking the driverside glass; We see a branch sticking out of a character's chest with blood on their clothing. Another person pulls the branch out; We see the men trapped in the mine struggling to breathe; Two trucks smack into each other; Mike shoots at the villain; Mike and the villain fist fight and try to strangle each other. At one point, Mike stomps on him, but he trips Mike; The cables on a bridge snap under the weight of a truck going across it; Mike and the villain get back to the truck and keep punching each other. Mike wraps a seatbelt around the villain who ends up hanging out of the truck. He gets free and climbs back into the truck and they keep fighting; Mike jumps out as the truck hits ice and sinks, taking a person with it; A bridge collapses after a truck goes over it. The truck then rolls backwards towards the edge and a character rushes to lock the gate to the bridge (which is gone now). The person gets pinned sgainst the fence. After the truck pulls away from the fence, the person falls to the ground and dies; We hear the sounds of explosions; Mike punches a man in the face. Disclaimer: All reviews are based solely on the opinions of the reviewer. Most reviews are rated on how the reviewer enjoyed the film overall, not exclusively on content. However, if the content really affects the reviewer's opinion and experience of the film, it will definitely affect the reviewer's overall rating.