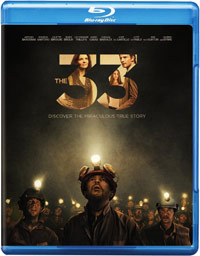 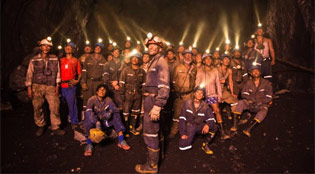 In 2010, the eyes of the world turned to Chile, where 33 miners had been buried alive by the catastrophic explosion and collapse of a 100-year-old gold and copper mine. Over the next 69 days, an international team worked night and day in a desperate attempt to rescue the trapped men as their families and friends, as well as millions of people globally, waited and watched anxiously for any sign of hope. But 200 stories beneath the surface, in the suffocating heat and with tensions rising, provisions-and time-were quickly running out. A story of resilience, personal transformation and triumph of the human spirit, the film takes us to the Earth's darkest depths, revealing the psyches of the men trapped in the mine, and depicting the courage of both the miners and their families who refused to give up.

Based on the gripping true story of survival - and filmed with the cooperation of the miners, their families and their rescuers - "The 33" reveals the never-before-seen actual events that unfolded, above and below ground, which became nothing less than a worldwide phenomenon. (from Warner Bros.) 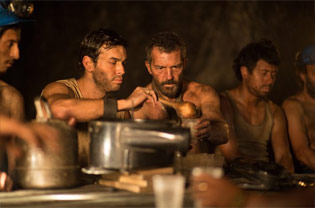 As the old saying goes, truth is often stranger than fiction. Generally, if you watched a story about 33 miners getting trapped alive deep inside the earth for over 60 days, you might just chalk it up to outrageous fiction. However, when you watch The 33 knowing this actually happened... it's sobering to even try to wrap your head around that.

A film like Everest is similar in the sense that it's a harrowing disaster story that takes place in some of the most brutal natural circumstances. In Everest, there were major casualties on a famous trek to the summit of the mountain; in The 33, it's more of a miraculous story where 33 mend unite in order to survive. The other thing that The 33 has to make it even more intriguing is its stellar cast. Along with Antonio Banderas leading the pack as Mario, you have Lou Diamond Phillips, Juliette Binoche, Gabriel Byrne, Rodrigo Santoro, and even The Office's Oscar Nuñez. There are many other recognizable faces along the way as well, and they all collectively turn in some really powerful performances. There's definitely a faith element to the film as well, and it's an added element that gives the emotional significance of the story some extra weight.

Banderas and Phillips carry the heaviest of the emotional performances when it comes to the miners, while Binoche and Santoro lead the pack above ground. (It's kind of funny to think that Santoro was one of the most hated additional cast members during the run of the TV show LOST, and here he's quite good in the film.) The production values of the film are quite impressive as well. The cave-in scene is gripping and terrifying. And then the fact that these men are trying to survive in such overwhelming conditions together, trapped 1700 feet below the earth's surface, adds an element of claustrophobia and tension. 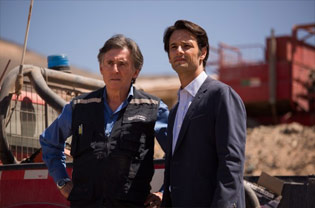 The objectionable content for the film isn't too strong, but it's definitely intense at times. There's a bit of language - mostly the "S" word (and mostly from Banderas's character) - as well as some mild sensual references, especially with the fact that Nuñez's character Yonni is having an affair with a woman that's not his wife and it's kind of a joke in the film. There's a little blood in the aftermath of the cave-in, but nothing real graphic. And although there's some violence where the family members of the miners nearly riot to get help for their loved ones, and a couple other moments show the miners cracking under pressure, nothing is brutally violent and none of it gets graphic (or lethal) either.

The 33 was a delightful surprise. It's a great story, and an inspiring one about brotherhood, survival, family and perseverance. It's moving, thrilling and expertly crafted. And, to add to its emotional impact, this is actually one of the final films James Horner (Titanic) composed music for before his fatal plane crash last year. Definitely check out The 33 if you're looking for any new exciting and inspiring films.


The 33 arrives on Blu-Ray with Digital HD and separately on DVD. It looks beautiful in high definition, so I definitely recommend watching it in its HD presentation. The special features include the following:

The Mine Collapse (3:54) - The special features are really thin on this Blu-Ray disc. Aside from the theatrical trailer, there are only two featurettes, and both of them play out like commercials. The first one shows a mix of clips from the film and some behind-the-scenes footage about how they did some of the mine collapse effects, including the large rock that trapped them inside.

The 33: The World Was Watching (3:05) is very similar, but focuses more on the families and those above ground during the event. It still covers some of the miners' story as well, though. Both featurettes total less than 10 minutes of bonus material, and I would have loved to see more on how they recreated the cave-in and the underground scenes. It also would have been cool to hear from the real-life people from the disaster.

Sex/Nudity: Katty is working in her kitchen when her husband Mario comes up behind her and holds her tightly and tells her he loves her "bottom" and asks if he has ever told her that; Two women push and slap Yonni who was just caught cheating on his wife with another woman; When the miners receive some mail tubes, one of them says "Hey Gomez, here are your dirty magazines!", which might be a joke or for real. We never see the contents of the tube; The 33 men are shown without shirts for long periods of the film while they're trapped underground.

Alcohol/Drugs: We see Dario laying on a bench and sipping from a bottle; Dario finishes off his glass bottle of liquor and smashes it against a wall; One of the local officials comments that one of the miners has a drug problem.

Violence: Two women smack and push Yonni around. We then learn it's because he's cheating on his wife; The cave-in is a long sequence with lots of rock falling in on the men as they scramble to get into trucks to drive out. Some of them are injured in the process. At one point, a man stumbles to run after a truck and climbs on just in time. Another truck crashes into some rocks. Part of the collapse causes an impact that tosses a truck and some of the miners; Maria throws a rock at one of the workers that want the family to go away. A gun goes off to encourage the women to leave. Maria then repeatedly bangs on the fence and insists they won't leave; Dario finishes off his glass bottle of liquor and smashes it against a wall; One of the miners pulls the com off the wall and throws it against another wall; Maria slaps Laurence in the face; Mario hits Dario in the head after he steals some of the food. The miners then fight over the food; Yonni's wife and his mistress wrestle briefly while arguing over who gets Yonni; Alex freaks out and starts throwing things and then hits an ax against the wall repeatedly; Alex stands over a cliff and contemplates jumping off but doesn't; After "Elvis" attacks The Bolivian in his sleep, The Bolivian holds a knife to his throat. But Mario breaks this up before it escalates. Disclaimer: All reviews are based solely on the opinions of the reviewer. Most reviews are rated on how the reviewer enjoyed the film overall, not exclusively on content. However, if the content really affects the reviewer's opinion and experience of the film, it will definitely affect the reviewer's overall rating.