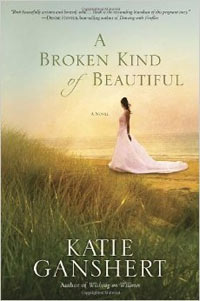 Broken or Beautiful? When given the choice between the two, we most often yearn for the one that promises to give us everything we think we want  only pulling us from the Love we most desperately need. And yet, in Katie Ganshert's newest novel, A Broken Kind of Beautiful, it seems maybe we can have both.

Ivy Clark, a twenty-four year old fashion model, hopes to escape her past as the illegitimate daughter of a man who couldn't seem to love her, by running to the fast-paced, image-driven, world of modeling. Career waning, she accepts a job promoting bridal gowns designed by her father's widow-the woman he'd cheated on while she was conceived. What's worse is that she'll be photographed by a guy who gave up his New York career to be a church maintenance man (how good could he be?), and does not fall prey to her charms. This world is upside-down to her.

I was drawn in immediately by the voice of Davis Knight, one who'd seen both worlds, and due to his own brokenness, chose to follow a truer path. God has given him an eye for beauty, but not the kind that flashes and blinds. He sees into an empty soul and aches to watch it filled. His new-found understanding is felt in the slower-paced, contemplative voice that contrasts that of Ivy, whose voice is frenetic, anxious and desperate in the writing. The author causes us to hope for Ivy from the first glimpses, even though she is shallow and treats men as playthings-a game she's learned as a method of survival. The emotion is subtle and powerful. But before you imagine Davis Knight as an icon of righteousness, ready to don his armor and save the girl, the reader discovers he is a real, live human being who struggles with the old temptations toward pride and possessing Ivy as she offers herself to be his. He speaks of forgiveness, though struggles to forgive himself.

The movement and growth is gradual and poignant. Ivy begins to see the depth of a life she'd never had a chance in which to indulge, wondering if she should embrace or destroy it. "Home. It floated in the air like a soap bubble. She imagined reaching out her finger and popping it."

So many times I felt the tears prick my eyes over the little things that spoke of a vacuous soul longing to be fed. And the moments where Ivy was incredulous to find her own worth when she'd been told her only value had already deteriorated with the advancing age of twenty-four years.

The supporting characters texturized this story in being both flawed and inspirational in one breath: The "mother" who'd taken her in even though a constant reminder of her husband's unfaithfulness; the sister who at one moment could see her blindness as a blessing from God, but at another cursed it by flinging objects across the room. As a believer and sinner, I could relate.

A Broken Kind of Beautiful is a story about the things that really matter in this world and the Beautiful Savior who makes us whole.