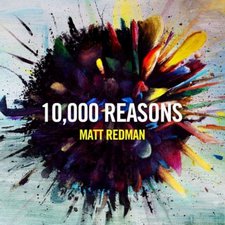 Matt Redman has been an icon for Christian music for well over a decade, and with his latest live project, 10,000 Reasons, he delivers a new batch of worship songs to the very receptive Church. The question, however, is: Does 10,000 Reasons bake us the same worship cookie-cutter recipe we've heard about an equal ten-thousand times?

The answer is: Yes and no. Upon first listen, it's understandable to compare these songs to your typical Hillsong/Desperation Band/Jesus Culture offering. The truth is, it's frightfully close. There's something almost inconspicuous, however, about Redman's approach that makes this album a hit and not a miss, even as a live set. This comes about at the very beginning with "We Are The Free." This dynamic song works well with an audience, and you just might find yourself drumming on the steering wheel or bobbing your head along with it. The next three songs slow down the tempo radically, but that's not a shocker when it comes to modern day worship albums (in my experience, it's easier to write a slow worship song than a fast one. There's the "celebratory" worship song, and the "reverent" worship song. The latter is simpler and worn out so often because usually when people write one, they can say practically anything humble in the lyrics and it'll sound "worshipful." Fast songs require a bit more creativity. This is just my theory; don't hang my head for it). There are really only about four upbeat songs on the album, but I have to admit that the slow ones aren't bad at all. Nearly all of the songs, though familiar in format, have the ability to absorb all of your attention. The title track is a hymn of sorts, with a nice raw acoustic feel, and you'll feel a tug to chime in as you listen.

Again, in worship songsand music in generalit's the little things that make a great song. The stops, the riffs, the pulse of the drum solo. Even the intensity or frailty of the singer's voice can change the course of a song and make it great or average. Matt Redman makes just enough right moves to differentiate his style from the Hillsong vogue. It's not by a lot, but just enough. The lyrics, for instance, do at times seem bland and watered down (what you would expect from a modern live worship band). Show me a worship song without the words "Lord you are (worthy, holy, mighty, etc.)" or any other recycled praise phrase, and I'll show you a fairly interesting worship song that managed to think outside the box. Why is it that when an artist writes a love song to a girl, he's capable of describing his experience with her in an almost poetic and fresh way, but when we write songs to our Lord, we use the same old phrases that have been overused since biblical times? I understand the expectations of a crowd at a worship conferencegive us something simple to sing, we want this to apply to everyonebut I seldom discover artists that successfully offer a powerful and effective worship song with equally creative lyrics (David Crowder, John Mark McMillan, and Steven Curtis Chapman come to mind immediately as some of the greats).

All that aside, I candidly enjoyed 10,000 Reasons. I would much rather use these songs as a means of connecting with God than, say, a Hillsong album. They're catchy, pretty, and luring enough to keep you coming back for more. If you've only got time for a few, check out "We Are The Free," "Here For You," "10,000 Reasons," "Never Once" and "O This God." I pray that this is a Neil Armstrong step towards a more diverse worship band.

After only just releasing a project with the Passion band in March, Matt Redman is back again with his latest release 10,000 Reasons. With such a well-known and much-loved songwriter as Matt, it will be very hard to not hear this project in some form or another. That definitely is not a problem though because, yet again, Redman has managed to create songs that are catchy and simple, whilst still carrying a strong gospel message. The contents stretch from the energetic "We are the Free," all the way to slower piano ballads such as the title track. Each song stands out on their own merits, but at the same time fits together with the rest of the project to create a rollercoaster of a worship session. Recorded at the LIFT worship conference, there is also a live element that creates a very powerful dynamic - as if the listener is at the conference, worshipping along with many others.

With each release, Matt explores new waters, moving the worship genre forward. It is hard not to feel that the bar has been raised once again with 10,000 Reasons. Could this be, dare I say it, the worship project of 2011? - David Couch, 7/10/11