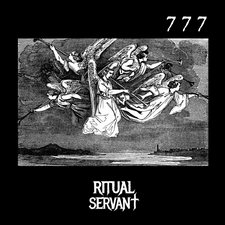 
Thrash metal as a genre has always thrived in the underground, with only a few bands making it into mainstream lore (Metallica and Megadeth come to mind). But this is seen more as an advantage then a problem, with countless bands harboring a fiercely loyal fanbase to more than satisfy their metal cravings. Enter South Carolinian thrashers Ritual Servant whose debut, a 3-song EP titled 777, was originally released digitally in 2017, and now for the first time is being offered on CD via Roxx Records.

A quick summary of their sound would be heavy 80's thrash metal akin to those early Metallica platters. Low-tuned, speedy guitar riffs, pounding drums and bass, scorching guitar solos, and a few symphonic keyboards sprinkled in add some atmosphere and melody. The vocal delivery differs from most modern metal bands, in that it mostly remains on one steady melodic pitch instead of pure guttural screams. For an independent metal EP, the production was clearer than I was expecting, though some may find the sound a little raw compared to the shiny production of the current top metal outfits. The lyrics are unashamedly Christian, with each song taking its own biblical theme. It's certainly refreshing, in a world of unrest and uncertainty, to hear a band boldly proclaiming the gospel, bearing a motto of "Scripture Based - Christ Exalted - Metal Gospel."

"Seven Trumpets" opens the short EP with a heavy, brooding atmosphere warning of the coming apocalypse described in the book of Revelation, "Seven trumpets/sounding off one by oneproclaiming return of the Son." "The Sacrifice" focuses on Christ's passion, and immediately reminded me of "For Whom The Bell Tolls" of Metallica fame. "The Just" proved to be the most catchy song here, with a shout-along hook, which leads into a melodic chorus. This song recounts the battle of David and Goliath, and deftly places it in the perspective of Christ's ultimate victory over His enemies, "Every knee shall bow/every tongue confess/and the just shall live in holy righteousness."

Ritual Servant has a lot going for them. Their straight-forward biblical message, coupled with solid metal chops prove a successful combination that has me eagerly anticipating what's next for these thrashers, and for Christian thrash metal in general. It should be noted that they have since released a full-length album, which hopefully grants them a greater platform to proclaim their metal gospel to the thrash underground.