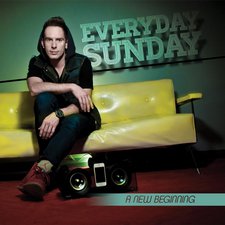 Trey Pearson has done it again. Year after year, album after album, it seems like the identity of his band, Everyday Sunday, changes. His newest release is certainly no exception to that. This time, he sets out to try his hand at electro-pop. A New Beginning is so different than his previous releases, it almost seems like it should have been released under a different name. But that's what's so great about Everyday Sunday; next time around, Pearson could try something completely different. We've seen rock, pop punk, pop rock and now this.

There's nothing wrong with change. In fact, it's always fun when a band releases an album so different from their catalog that it makes you do a double take. It just reveals the very reason they were successful to begin with. With A New Beginning EP, Pearson shows just how talented he is. Most artists can either only do one style, or are comfortable with where they are and never change. Things have changed for Pearson since he became the only member of his band, yet, he's embraced it full on.

A New Beginning is an enjoyable album, but it can get pretty confusing sometimes. Pearson's vocal style doesn't seem to mesh as well with this type of music as it has before. What made him so fun to listen to was the sheer raw passion found behind every song. Now he's auto-tuned. So while he still proves to be a master of melody, the whole EP seems off in a way that can only be understood by listening to the whole of it. If anything, A New Beginning EP is sure to be polarizing among longtime fans. There's no doubt that Pearson knows what he's doing here. He's crafted five fun, original songs. But will this new direction last? Everyday Sunday rocked Christian music for years. How long will they stay in the 'club?'

Lyrically, the band's style has shifted a bit as well. They've never really penned a 'party' song before, but "Solar," the opening track, is just that. It doesn't really go much deeper lyrically, but it's a bouncing anthem that's undoubtedly great in concert so it's hard to complain about its place on the album. After all, it's a fun way to start off. But things really take off in the next two songs. "Calculate" is a love song to God, letting Him know how we can't calculate how much He loves us, and "The Spark" is really His response to us. Told from God's perspective, Pearson sings, "I sent the sun for you, built up the mountains too. Laid out the stars in the sky, made it all for you. You know I made you beautiful." It's just comforting to know that everything is in God's plan and this song is a powerful reminder of that. He planned it all, even when we don't understand why.

The next song, "Perfect Time (To Fall in Love)," is catchy, but it feels sort of out of place. Once "Solar" ended, it seemed like the album became a little more thematic, keeping the lighthearted style, but becoming more serious lyrically. "Perfect Time" doesn't really stick to that. While Pearson's 'party' tracks are fun, the ones that really stand out are those with an important message. Clever, right? While it would have been hard to imagine Group 1 Crew and Everyday Sunday collaborating a few years ago, "A New Beginning," the EP's title track, actually works quite well and is a great way to close out the album. Life with Christ provides a truly new beginning for anyone. That's an offer He never takes back. "Calculate 2.0," much like most remixes if they aren't on a remix album, feels more like a bonus track than anything, but is a decent track as well.

Overall, it's still kind of a strange experience to listen to this album, even after a few times through. Musically and lyrically, it's a different step for Pearson. Is it fun? Sure. Is it his best? No, but it should be enough to keep fans interested until his next, potentially different, full-length project.