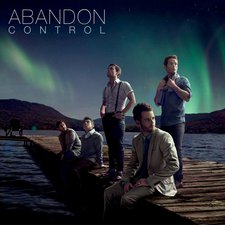 Although preceded by a seemingly endless number of EPs, Abandon's 2009 Searchlights was a commendable alternative pop rock album. Unfortunately, when this release finally appeared, fans were dismayed to find only four new songs. Through the band's latest effort, Control, listeners will instead encounter a well-anticipated 12 new songs, with only one recycled track ("Hero" returns for its third appearance after recently becoming a radio hit, with only slight alterations). Abandon's excellent "sophomore" release very distinctly broadens the band's sound from previous efforts and is definitely worth noting.

Control begins with "Feel It In Your Heart," the album's most vivid display of the progression of the band's sound from alt pop rock to including a definite dance feel. The melodic "Help" and the infectious "Talk To Me," are in this same vein. High-energy tracks abound, especially as found in the anthem-like chants of "SOS" and the liveliness of "Push It Away." All of the more energetic tracks sound well produced, without suffering from monotony or a lack of originality. From here, the sound shifts a few times, through a variety of softer, but still powerful, songs. The reflections presented in these softer songs, such as, "Your Love Goes On," may only be reminders of simple truths, but they are memorable nonetheless. The piano driven ballads, "Why Does It Take So Long" and "New Years Day," could also become fan favorites, the latter especially so. The album closes with "Known," a worshipful and uplifting ending that even features some vocal similarities to Phil Wickham.

Control's message never strays from the simple truths of faith. You won't find a single song containing the typical love stuck musings of most pop/rock bands. While few profound new reflections seem to rise, the songs seem more like honest thoughts than calculated or generic lyrics. The best example of this may be "Live It Out," which features chants, echoing vocals, and a message about the necessity of being forward about your faith. "Under Fire" is another song of encouragement to stand up for your beliefs, proudly proclaiming, "We are under fire/But it only burns all doubt away." Perhaps the best way to describe Control is to label it a collection of songs that could easily become anthems for the next age of Christian music fans.

Thankfully, Control does not constrain itself to one defined genre. The idea that Abandon would shift from its solid alternative debut toward a more pop/dance sound seems shocking, but the transition is pulled off flawlessly. With this year's release, Abandon will finally define themselves as more than just "that Christian band that sounds like The Killers." There is something tremendously encouraging about Control, and it will be a treat to witness where Abandon is heading next.

One of the bands that has really picked up momentum in the last year or so has been the five-piece pop rock group from Texas known as Abandon. Although their debut album, Searchlights, was mostly a mix of songs that Abandon had previously released on a series of EPs, their anticipated sophomore project, Control, is virtually all fresh. There is more energy (including a dance element) in Control than Searchlights, but this release never feels less professional than the first album. Instead, Control actually runs smoother than its predecessor behind "Feel It In Your Heart," "New Years Day" and "Under Fire." The rockier tunes sound less choppy this time around (particularly "Push it away"), and the album in general has better production than Searchlights. The biggest flaw musically in the album, however, fortunately is only the encore appearance of Abandon's hit song "Hero" which seems a little cheap. Abandon offers more direct lyrics to go along with their more pop oriented music which works when delivering easier themes, but it also means the lyrics are less thoughtful (e.g. "City Lights" and "Providence" from Searchlights). Still Abandon challenges listeners to know and live their faith in both "Live It Out" and "Under Fire," while the idea behind the album's title is brought up in "Let Go." Overall, Control is a nearly flawless pop/rock album which is a terrific song or two away from being outstanding. - Nathaniel Schexnayder, 4/17/11